Students shave for a cause 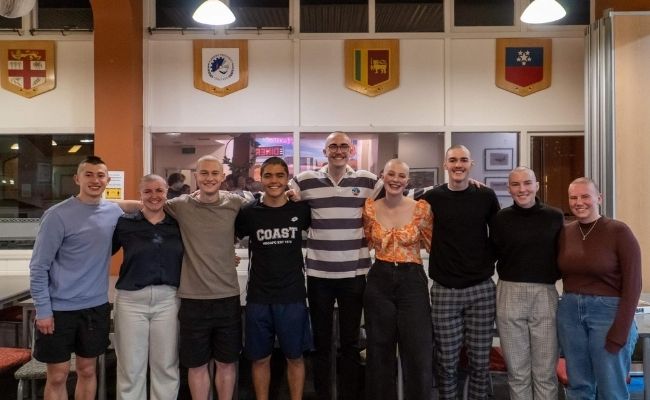 Despite being in lockdown the students saw through their decision to say goodbye to their hair for the cause.

This year, ten students took on the Shave for a Cure campaign, saying goodbye to their locks and raising more than $18,000.

Despite being in lockdown the students saw through their decision to say goodbye to their hair for the cause. The event was livestreamed to ensure participants were within Alert Level 2 and 3 guidelines and they successfully reached more than 70,000 people on social media.

Health Sciences First Year student Jack Kininmonth says the big event has been on his bucket list for quite some time and sharing it with other students was special.

“We started with two of us and grew to 11 students in total. There were good vibes all round and the fundraiser really took off. Now we’re getting lots of head pats!”

Marketing and Pharmacology student Amber Harrison, who is rocking her new look with style says the decision for her was made quickly.

“A few weeks before the event, one of our friends Jack was like ‘do you wanna shave your head with us?’ and I was like yeah sure, why not?”

“I was terrified at the start thinking ‘what have a signed myself up for?’ Your hair is something that will grow back but the impact we have had for other people will last so much longer.” 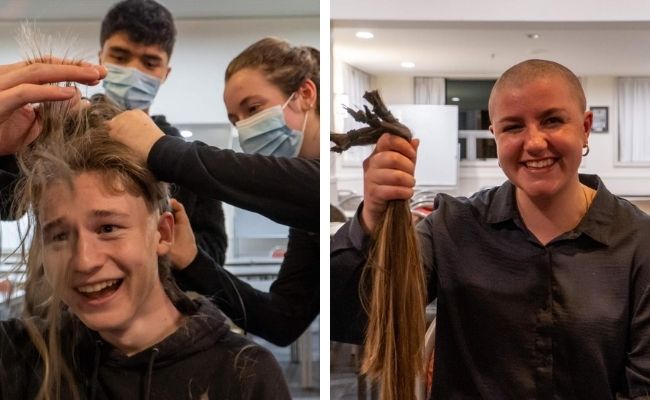 “I was terrified at the start thinking ‘what have a signed myself up for?’ Your hair is something that will grow back but the impact we have had for other people will last so much longer.”

Tessa Worthington was another student participant who says the event was of significant importance to her.

“At the start of the year, I mentioned to Jack that I wanted to do this and he said he had wanted to as well. We were meant to shave in August but we went into lockdown so it wasn’t possible. We made the most of the extra time with our hair by doing some funky hair styles to make the most of it.”

The Health Sciences First Year student was thrilled to see so many people show their support and says the whole event has been both empowering and a little anxiety inducing.

“The event was weirdly apocalyptic. Everyone around me was in a mask and my hair is being shaved it was so surreal to watch in the mirror. We weren’t allowed to have a lot of people there so we invited our close friends. It was cool to be shaving our heads ourselves with our friends helping out.

“We started with a target of $5000 but quickly raised more. It was a surprise at first. I think it’s because so many people have been affected by cancer. Even people we don’t know donated which was awesome, they see the value in the cause.”

The funds raised will now go to the Cancer Society who the students are thrilled to support.

“They do a lot of work that people might not even realise, like providing support to patients at chemo appointments and psychology appointments,” Media, Film and Communications student Elise Maric says.

“I’d love for this to become a yearly event.”