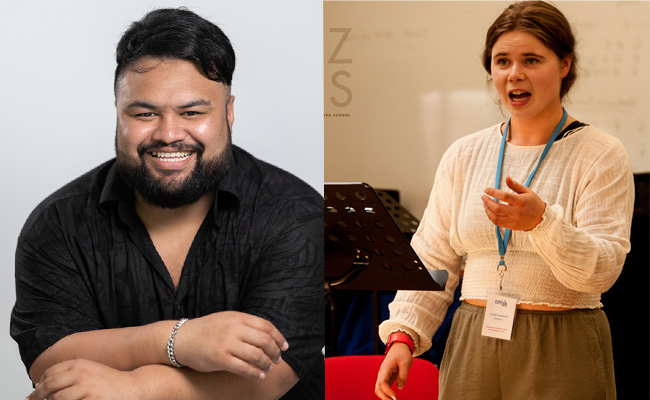 Congratulations to Otago alumnus Ridge Ponini and current student Sarah Hubbard for reaching the semi-finals of the Lexus Song Quest. Ridge, a proud Cook Islander, has an honour’s degree in Music and Sarah is studying for a Bachelor of Music.

In 2016, Sarah began singing with Opera Otago and has gone on to feature in several of their productions. She was the recipient of the Colin McDonald Memorial Prize in 2019 and 2021 for musical excellence at the University of Otago and will feature in New Zealand Opera’s 2022 production of Macbeth. Since 2021, Sarah has been an alumnus of the New Zealand Opera School.

“I found out about getting into the Lexus semi-finals on my 21st birthday, which was a huge birthday treat! I cried tears of joy and immediately rang and notified everyone who had helped me get to this point,” says Sarah.

“The Lexus Song Quest is something I've been dreaming of for years as a young opera singer and making it into the semi-finals is like a dream come true. I am incredibly privileged to perform alongside some of NZ's finest singers!”

Ridge, 26, majored in classical voice performance at Otago under the tuition of Judy Bellingham, graduating in 2018. In 2016 he sang several roles in John Drummond’s new opera War Hero presented by Opera Otago. In 2017 Ridge was named the Most Promising Singer and received the Judges’ Choice Award in the Dame Malvina Major Foundation Aria award, and in the same competition in 2018 placed second. Also in 2018, he was awarded the prize for the singer with the most potential in the McCormick Opera Award and fulfilled his long-held dream to return to Rarotonga as a guest artist for Opera in Rarotonga. He attended the New Zealand Opera School in 2020 and 2021 and last year was awarded the Enari Iosefa Opera Award from Creative New Zealand.

“At the time I received the call [from Lexus] I was surrounded by my family. I thought this is not happening to me!” says Ridge.

He says he had lost confidence in himself and had not been singing over the past two years but deciding to give the contest a go and then being called back as a semi-finalist has made him believe he still has a lot to offer.

“We were all crying, nobody from the Cook Islands has done this before, to be the first was amazing, it’s a big accomplishment.”

Professor Terence Dennis, Otago’s Blair Professor and William Evans Professor at the School of Performing Arts, is the official pianist for the upcoming semi-final and the Grand Final Gala – a role he has performed since 1991. We would also like to acknowledge contest judge Nikki Li Hartliep, critically acclaimed soprano with 20 years’ experience performing across the world’s great stages and extensive experience teaching voice at music conservatories in the United States and a private studio in New York city. Nikki, who moved to Dunedin in 2019 when her partner took up a role in Otago’s Development and Alumni Relations Office, was one of the two contest judges who chose the 10 semi-finalists from auditions held around the country and from videos sent by international applicants.

Head of the School of Performing Arts Te Kāhui Tau, Professor Anthony Ritchie says, “the Lexus is Aotearoa’s premiere singing competition and a stepping-stone for an international career. I am thrilled that Sarah and Ridge have made it to the semi-finals and wish them well. It’s a fine achievement and also a testament to their teachers, Tessa and Judy.”

On 16 and 17 July the semi-finalists will compete for one of five places at the Grand Final Gala, which will be held on 23 July at the Michael Fowler Centre in Wellington.