A word from the Head of Alumni Relations 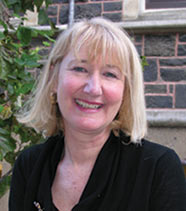 has been a very busy year for the Alumni team, especially those of us involved in events organisation, with a full schedule of alumni receptions held in New Zealand, Australia and South-east Asia, and more to come in Canada, the US and UK before year’s end. These events are always popular, but this year is the first time we have had to cap numbers in many venues due to record demand. The opportunity to meet old friends and classmates in an atmosphere of Otago nostalgia is always a big drawcard, but this year the presence of the new Vice-Chancellor, Professor Harlene Hayne, has been an added attraction for alumni interested in hearing her plans for Otago’s future.

The demand this year has encouraged us to think about new ways of connecting face-to-face with alumni in New Zealand and around the world, so watch out for a new-look events programme in 2013 that will include smaller, more informal functions, in addition to the large-scale cocktail format currently offered. More information on this will be available in the February issue of the Magazine. You can visit the Alumni and Friends’ website  to view photos, along with comments about each event.

Other developments planned for next year include new ways to connect with alumni which we hope will make the information we send more targeted and relevant for you. One of these includes plans to provide access on-demand to University expertise via podcasts and live streaming of lectures direct to alumni. These initiatives are aimed at adding value to the relationship that alumni enjoy with the University of Otago by providing targeted information to alumni sectors that is relevant to career, social and educational aspirations.

We are also interested to get your ideas on how you want to see the Alumni programme develop. Feedback from you will help us ensure we are working in the right directions to meet alumni needs and expectations. You can do this via a survey on our website.

We look forward to hearing from you.

Thank you to the Otago alumni who have generously supported the 2011–2012 Alumni Appeal. Each year, as well as supporting a number of key research projects, a proportion of the appeal funds undergraduate scholarships. This makes it possible for the University to provide a number of first-year scholarships, enabling outstanding young people who would not otherwise be able to attend university to study at Otago, making a real difference to these scholars’ lives.

Thanks to the generosity of alumni in New Zealand and overseas, the University was able to fund an additional 15 undergraduate scholarships this year and a similar number of fees-only scholarships, as well as a wide range of commemorative scholarships, prizes and awards to which alumni kindly donated.

In 2012 the Alumni Appeal will not take place in November as in previous years. Instead, we are concentrating on preparations for the 2013 appeal that will coincide with the February issue of the Otago Magazine. The 2013 appeal will support some exciting new projects that will put the University at the forefront of national and international education, research and development. You may also notice new services and benefits for our alumni and friends, and changes in the ways in which we will engage with you and ask for your help – donating is not the only way in which you can support Otago.

Scholarships will continue to be a major focus of the 2013 appeal as the University considers them to be a vital investment in our country’s future. It is particularly crucial to at least maintain, if not increase, the current level of alumni support for scholarships, as any reduction in funding raised this year will have a knock-on effect on the number of scholarships we are able to award in 2014.

For more details on research projects and scholarships supported by alumni donations, or if you would like to donate to the University, please visit alumni.otago.ac.nz/supportotago 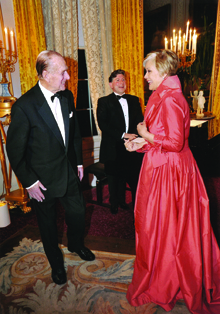 has been another busy year of engagements for Professor Terence Dennis MNZM, FNZAH, FRSNZ (MusB(Hons) 1978) – the William Evans Professor of Music. On 5 March he had the honour of partnering Dame Kiri Te Kanawa for a special Royal Recital for the Outward Bound Trust hosted by the Duke of Edinburgh, Prince Philip, and held in the Grand Salon at Frogmore House, Windsor. The pair presented a programme of Handel, Liszt, Canteloube, Britten, Ginastera and Puccini. Professor Dennis enjoys a close recital collaboration with Dame Kiri – last year they gave recitals in Hawai’i, Melbourne and Brisbane, and in April they continued their series of critically acclaimed recital tours with five more sold-out concerts in Australia.

University of Otago alumni were well-represented at the 2012 London Olympics, with 12 athletes competing and 21 officials and support staff attending the games. Special congratulations to Nathan Cohen and Hamish Bond, who both commenced BCom degrees at Otago, for their gold medals in the rowing: men’s double sculls and men’s coxless pair respectively. Otago alumni Phillipa Gray (BSc 2010) and Chris Ross (MPlan 2012) also represented New Zealand in cycling at the London 2012 Paralympic Games, with Phillipa winning gold in the women’s pursuit, silver in the road cycling time trial and bronze in the women’s B 1km time trial. 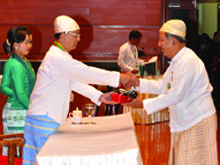 U Myint Thein (BE 1960, ME 1962) has been decorated with a prestigious Wunna Kyaw Htin award for services to the mineral industry. The award – a title of honour given in recognition of government service – was presented by President U Thein Sein of Myanmar (pictured, left) at a ceremony in Naypyidaw earlier this year. Myint Thein came to Otago in 1957 on a Colombo Plan scholarship, graduating with a Master’s Degree in Mineral Engineering from the Otago School of Mines in 1962. He returned to his home country of Myanmar, where he worked extensively in the mining and engineering industries, beginning as a junior mining engineer and working his way up to Deputy Minister at the Ministry of Mines, a position he held for 14 years before retiring in 2006. During his career, Myint Thein contributed significantly to the development of mining in Myanmar, introducing new technologies and was instrumental in the creation of an iron and steel industry there, starting from scratch using locally available raw materials. He has shared his expertise as a consultant, participating in UN programmes in developing countries such as China, Indonesia, India and Nepal. U Myint Thein described his time at Otago University as “the best and most enjoyable days of my life”.

(BA(Hons) 1992, MA English 1994) has been receiving sensational reviews for her first collection of short stories, All the Voices Cry (Biblioasis, 2012). Even prior to publication the greater part of the manuscript was awarded the 2009 Richard Adams Award offered by the Writers’ Federation of New Brunswick. The book has been long-listed for the prestigious Frank O’Connor International Short Story Award, while other stories have variously been shortlisted for the CBC Literary Awards, the Journey Prize, the Writers’ Union of Canada competition and the Metcalf Rooke Award for fiction. Petersen now lives in Montreal with her husband and two daughters and in August visited Otago where she held a discussion of her writing at an event held by the University of Otago Centre of the Book. Further information on All the Voices Cry can be found at www.biblioasis.com/alice-petersen/all-the-voices-cry

Jude Hanan (BA 1993) has recently been appointed to the position of Social Media and Emerging Tools Strategist at the World Bank in Washington.

Lynn McKenzie (BA 1980; DipPlan 1983) was appointed President of Zonta International at the organisation’s annual convention in Torino, Italy in July.

Knight of the New Zealand Order of Merit (KNZM): The Hon. Dr Michael Cullen, for services to the State.