Whatever happened to ... the Sextet?

Whatever happened to … the Sextet?

In the YouTube clip, the capella version of The First Day of Christmas sounds just as it should: the tempo is andante, the key is F major, the harmony pleasing. But it isn’t long before the traditional carol morphs into something altogether … different.

For the six clown-costumed singers onstage are not a troupe of carollers. They are, instead, the University Sextet, a group that has – more or less for the last 100 years, and more or less in the same number and format – entertained Otago Capping Concert audiences with risqué and satirical lyrics set to well-known tunes. In the process, they have become an Otago institution and are today the only University-based group of their kind in the southern hemisphere.

When their Christmas medley segues into Deck the Halls, the Sextet’s penchant for double entendre comes to the fore, the singing clowns harmonise, their dead-pan expressions counterpointed by the occasional suggestive gesture. Off-camera, the audience explodes with laughter. The lyrical content probably shouldn’t be reproduced in this publication – in fact, the Sextet stopped printing their song sheets in the 1970s for this reason.

Since then it can be said that the University Sextet has mastered the art of smutty, tongue-in-cheek lyrics while steadily improving the quality of their vocal delivery. Indeed, much of the Sextet’s success, commentators surmise, lies in its somewhat incongruous ability to deliver sexually and politically controversial content via a vocal approach more commonly associated with church choirs and the salon music of the upper classes than the bawdy music-making of the masses.

International conductor and former Sextet member Tecwyn Evans, in a 1994 fourth-year dissertation, traced the genesis of the group back to a quartet that first appeared in the capping review in 1903. It later became a quintet and, for the first time, in 1912 a sextet. With a World War 1 hiatus and fluctuating numbers thereafter for several years, the Sextet wasn’t a regular Capping Concert fixture until the early 1920s.

From these earliest of days, the Sextet was characterised by controversial lyrics – in particular from the pens of the late Keith Stronach and Dr Nigel Eastgate, whose lyrical contributions continued long after their formal association with the group ended. However, it is thought that the multi-part harmonisation, now synonymous with the Sextet, was not introduced until the 1970s and that, prior to this time, most of the music was sung in unison with piano accompaniment.

There were two likely reasons for this development. Firstly, the rise of acts such as The King’s Singers popularised the multi-part or “choral” approach. But, more importantly, the singers coming into the Sextet were more technically skilled and versed in choral arrangement. Until then, their predecessors had nearly always been medical, dental or law students – including many who went on to be prominent in their fields – who were able singers but, from the ’70s onwards, the Sextet was increasingly dominated by musically-trained students, often with considerable experience in choirs.

Dunedin baritone and former mayor Peter Chin recounts how his membership of the Sextet was largely responsible for his assimilation into the student culture of which the sheltered Chinese New Zealander had, until that time, little experience.

“In 1958 I went to the Capping Concert in His Majesty’s Theatre and it was tremendous, with these guys in clown outfits and tails. So I went to audition for the capping chorus and one of the auditioners asked if I’d like to audition for Sextet.

“So I went along and got in, and it was a complete social mismatch. The other guys were all smooth dental and medical students, but I’d grown up in a family where there was no English spoken at home. I’d had nothing to do with European girls – I didn’t know how to talk to them. And drinking wasn’t part of Chinese culture, so that was a novelty in the first year, too. In fact, the Capping Concert backstage was aswill with beer. The Sextet used to get half a dozen bottles of beer each – the big bottles. I’ve prided myself since those days in never having a drink before I go onstage.” 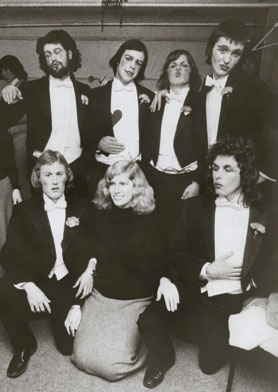 Simon O’Neill recounts the time, in 1993, when the Sextet was invited by the Otago Rugby Football Union to perform as “warm-up” for the Bledisloe Cup match.

“Carisbrook was pumping,” he recalls. “We followed the Poggin’ Scroggin’ Bush Band onto the stage and you can just imagine how six men in clown costumes went down. So we started singing our numbers and thought we were being quite witty, but the audience did not. By the time we got to The Man I Love you can imagine the hate that started coming.

“My brother and my friend started up with ‘Simon’s a wanker’, and soon 40,000 people were chanting it. By the third song they started throwing beer cans. The empty cans couldn’t reach us, but unopened, full cans had the range. We would look out into the crowd and suddenly the silhouette of a missile would appear, coming towards us.

“I remember Tecwyn catching a can right in front of his face and flicking it open with his thumb. Then we all drank some really quickly. I always think nothing in my career in opera will ever be worse than that day.”

Today the group’s culture is more abstemious than it was in the days when the Sextet’s backstage refreshment was sponsored by the Robbie Burns pub, but their lyrics continue to raise eyebrows. Chin believes the Sextet’s latter day lyrical content takes the sexual subject matter too far beyond the realms of innuendo.

“Political farce is fun, but with sexual farce you have to be very careful,” says Senior Lecturer in Voice and long-time friend of the Sextet, Judy Bellingham. “You can’t get away with smut unless it’s brilliantly done. A lot of people are offended by it, but they’re students and it’s a student show, although I have been encouraging them to sing standards, too, because they need a wide repertoire.”

Wilson admits it’s a challenge coming up with lyrics and arrangements for six parodies every year. Some they do themselves, the responsibilities being divided according to the particular skills of the members at the time, while for others they might get help – the Music Department’s Professor John Drummond was a long-time Sextet arranger, for example. 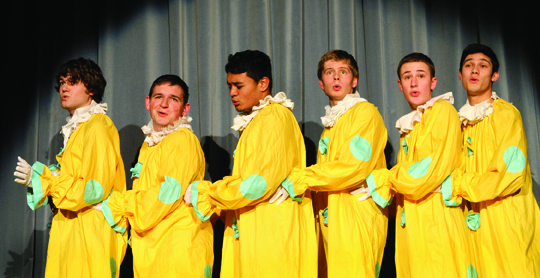 From a vocal point of view the Sextet comprises two tenors – one often singing in alto – two baritones and two basses, singing in up to six-part arrangements. Internally, there is a strict hierarchy that has been observed for decades. This comprises the convenor, sub-convenor, goat herders and goats, who are the newest members. According to current member Laurence Mossman, who completed an ethnography of the Sextet in 2011, this enables traditions to be retained in a group whose various members come and go, sometimes from year-to-year.

“Sextet culture is passed down each year and maintained by its members,” Mossman notes. “This emphasises the senior members’ responsibility to communicate these values to the new members.

“The hierarchy [also] acts as a system of seniority and leadership within the group that is understood and carried out by all the members, much like musical directors, head choristers and section leaders in a choir.”

“The hierarchy does work well,” says Wilson. “Older members know how the ball rolls and pass the knowledge on to the others, and that’s one of the most important factors in how the Sextet survives.”

Currently the Sextet receives a small amount of funding from OUSA to cover the cost of costume repairs and make-up. Recently they commissioned new clown costumes – a necessary initiative given the increasingly threadbare state of the old costumes, but one that will deprive new members of the delight of donning the same costumes that Jonathan Lemalu and Simon O’Neill once wore.

Bellingham believes that, particularly given its longevity, the Otago Sextet is quite possibly unique in the world.
“They are also great male role models,” she adds. “To have six guys up there singing a capella, when in New Zealand it’s just not the done thing for males to do that, I think it’s great.”

“The Sextet is an institution,” says Evans. “It has so many unique characteristics and those lucky enough to have been part of it during their time at University always remember the hilarity they and the audience enjoyed.”

But the final words surely belong to the 1946 University Sextet, sung to the tune of the air Mighty Lak’ a Rose:

Just a note of music
Just a stave of song
Keeps the heart from wearying,
The day from growing long –
Though you may be troubled,
Never you forget
Gladness is redoubled
By the Varsity Sextet.

With thanks to all interviewees and, in particular, to Tecwyn Evans for access to the dissertation which provided information on which this article draws.