Two paintings, recently acquired by the Hocken, depict scenes of St Bathans, a historic settlement in the Maniototo, Central Otago, established in 1863 to service the area’s new goldmines. Although the dates of these two paintings are separated by more than two decades, the artists who painted them had much in common. 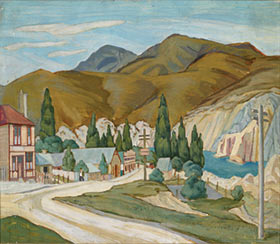 The landscape paintings of Doris Lusk and Leo Bensemann draw inspiration from several of the same regions of New Zealand’s South Island – Central Otago, Canterbury and Nelson, the area where they both eventually settled during the later part of their careers.

The two artists met after Lusk moved from Dunedin to Christchurch, where Bensemann was living, in 1941. Bensemann was already a member of the progressive art collective known as The Group, when Lusk joined in 1943. During the decades that followed they became close friends and, in the 1960s, the pair went on many painting excursions together, including several trips to Central Otago. St Bathans was a subject that recurred in Lusk’s work from the 1930s to the 1960s, but one that only appears in Bensemann’s work after 1960, when he began to focus on landscape painting. 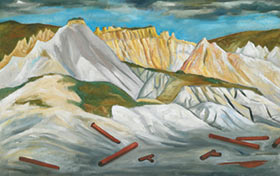 Lusk’s painting primarily shows the town’s historic buildings – the iconic The Vulcan hotel and the St Bathans Post Office, an elegant two-storeyed timber structure. She also depicts the Blue Lake that was formed by a deep crater, the result of gold-mining activities, which slowly filled with water after the 1930s. While Lusk’s reference to the settlement’s mining history is subtle in this painting, another of her paintings completed about the same time, titled Sluice Mine, Near St Bathans (1942), is more overt as it depicts the water pipes used in gold sluicing.

Lusk’s depictions of the countryside have often included documentation of how human activities – as varied as the Benmore hydro-electric power station and tobacco farming in the Nelson region – have impacted on the natural appearance of the land. In St Bathans the bare chalky hills that circle the lake’s edge highlight the environmental effects of mining, in particular soil erosion.

Bensemann’s work Untitled [St Bathans] is similar to Lusk’s painting in its colour, bold execution and implied conservationist message. Fascinated with the stark and devastated landforms left behind by invasive gold-mining activities, Bensemann exaggerates the pale and rugged surfaces of the denuded landscape. His pristine white hills accentuate the untidy array of broken and rusted metal pipes in the foreground, while a gray shadow cast over the industrial debris left by miners adds historical drama to the scene.

No doubt Bensemann’s eye was attracted to St Bathans’ scarred landforms for their surrealist potential, and because they reminded him of the bare rock backgrounds found in the Renaissance paintings of Giotto and Bellini, which he fondly admired.