Around the year AD 1300, double-hulled ocean-going canoes carrying a group of East Polynesians – from the recently-settled Cook or Society Islands, perhaps – travelled south-west to a land mass they may have gleaned hints of already: the millions of migrating muttonbirds seen each year, for example, would have indicated there was land to the south.

They might, or might not, have remarked upon the long white cloud as they approached. Currents and expedience may have taken them first to the northern North Island, but with the richest meat sources well to the south, they travelled down the coast and across the strait until they reached a long, gravelly bar at the mouth of the Wairau River.

It’s a forlorn spot by any standards – windswept and desolate. And “Why would they want to live there?” is a question that has gnawed at Otago’s Southern Pacific Archaeological Research (SPAR) co-director Chris Jacomb from the moment he arrived at the site of what might be New Zealand’s earliest village – and arguably the most significant archaeological arena in Polynesia. But, on reflection, Jacomb asks us to look at it through 700-year-old eyes.

“It might have been warmer then, and it’s likely the bar was covered in shrubs and small trees, so somewhat sheltered. And think about what would make an ideal location for new migrants: not only did it provide access to marine and land resources, but ample fresh water, estuaries for shellfish and fertile land to grow crops.
“Other parts of New Zealand offered a similar environment, but the Wairau Bar was also at the northern limit of the richest moa-hunting grounds in the country, making it the perfect choice for a colonising settlement.”

It was comfortable enough, we know, for seven of these migrants to stop and settle here for the rest of their lives. They died and were buried in a cluster near to one another. And in the 100 or so years their new village thrived, these early New Zealanders left traces of their daily lives: ovens, middens, ornaments, tools and at least 37 further graves.

It was schoolboy Jim Eyles who famously stumbled across human and moa remains on the site in 1939. From then until the early 1960s, pioneering archaeologist Roger Duff and Canterbury Museum-led expeditions unearthed 44 skeletons and more than 3,000 artefacts. However, relations with local iwi Rangitane o Wairau became strained when it was discovered that human remains were being unearthed.

“New Zealand was the most recently colonised land mass in the world,” says SPAR co-director Professor Richard Walter. “Wairau Bar is the most significant site of this colonisation phase and among the 100 most important sites in the world. But no one could get near it, and the bones and artefacts had not been scientifically analysed for about 70 years. If you’d asked me six years ago whether they ever would, I would have said no.” 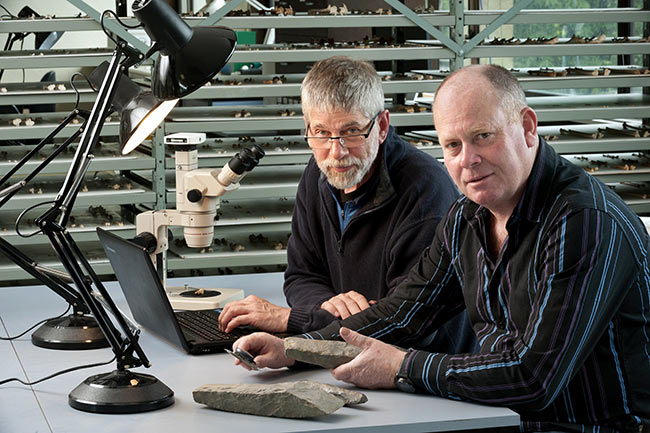 Chris Jacomb and Professor Richard Walter: Their examination of the artefacts and remnants from Wairau Bar gives an insight into the daily life of the first New Zealanders.

However, Rangitane development manager Richard Bradley describes a growing discontent among Rangitane iwi members that the human remains, stored at Canterbury Museum, were so far from the land where they were originally buried. Finally, a deal for repatriation was struck: the museum said yes, but asked that first they be analysed by biological anthropologists from the University of Otago to see what could be learned about these early New Zealanders’ lives. And when locations in the site were chosen for reinterment, archaeologists would examine the ground before reburial took place. Rangitane approached Foss Leach and Janet Davidson to do assessment work and they, in turn, recommended Walter of the University of Otago.

Rangitane ranged “from the sceptical to the deeply suspicious”, recalls Bradley. He credits Walter with “mending a broken bridge” by allowing iwi to “hang out” at the site, talk about their histories and assist with the excavations. And when Walter’s team began making finds that aligned with the kaumatua’s stories, even the most recalcitrant among them started taking notice.

“There had been an idea that because houses were built near where people were buried, it was a sign that later generations didn’t know the bodies were there. But our kaumatua had told us uruupa were only separated from houses when the Pākehā came along. Before that you buried your loved ones close to the house– that’s how you knew who you were.”

Now, all sides – Rangitane, Otago and Canterbury Museum – talk of an enduring and powerful partnership that has yielded unprecedented understandings of how we, as New Zealanders, began.

What might have happened is a story being pieced together from all directions by Otago’s Wairau Bar Research Group. Professor Richard Walter leads the archaeological investigation, examining artefacts and remnants from early Māori daily life. Dr Hallie Buckley heads up the biological anthropology team: during a “small window of opportunity”, until the remains were repatriated in a 2009 ceremony, she was entrusted with the precious ancient bones to learn what she could about the people’s quality of life, diet, life expectancy and responses to the environment. Professor Lisa Matisoo-Smith’s team, meanwhile, used Otago’s new DNA-sequencing facilities to complete a genetic map that reveals how the population at Wairau were related to one another and to their Pacific ancestors.

And, as the group’s research is analysed and published, the most detailed picture ever of the first generations of New Zealanders is emerging.

Seven of the New Zealanders, the ones buried together near the north end of the site, had grown up eating softer, starchier food. “Their teeth were less worn and bear evidence of gum disease, a sign of a more sugary, probably root-crop-based diet.” These observations align with the dietary signatures Buckley and postdoctoral fellow Rebecca Kinastons found locked into the stable isotopes in bone collagen.

Compare this to the dental and stable isotope profile of others whose diet appears more varied and it provides compelling evidence that these seven grew up elsewhere, possibly tropical Polynesia. These may have been among our first New Zealanders.

Enter the work of Matisoo-Smith’s team, whose genetic mapping – the first successful mitochondrial DNA mapping exercise for an ancient Pacific people – potentially takes us back even further. 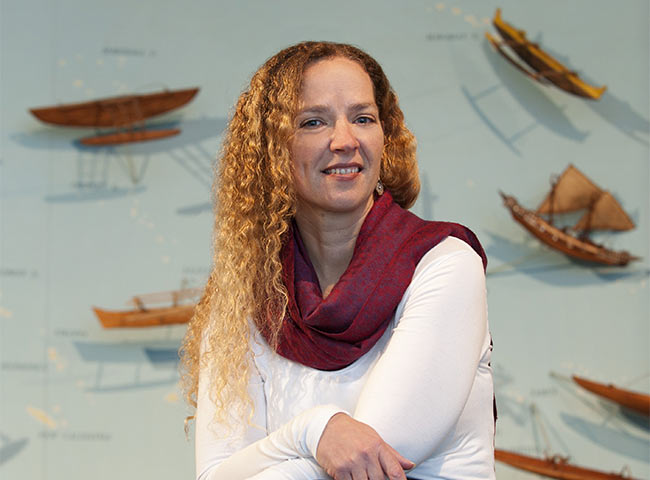 Professor Lisa Matisoo-Smith: Genetic profiles “may help identify the specific island homelands of the initial canoes that arrived in Aotearoa/New Zealand 700 years ago”.

If similar genetic profiles can be found among other Pacific populations, says Matisoo-Smith, “this may help identify the specific island homelands of the initial canoes that arrived in Aotearoa/New Zealand 700 years ago”. Indeed, it raises the possibility of one day knowing the location of the Māori ancestral motherland, Hawaiiki.

Importantly, three of the four had no recent common maternal ancestor and indicate greater genetic diversity among early Māori than previously believed. If they were unrelated to one another, this may suggest an intentional migration with the purpose of establishing a new population. Dr Susan Hayes’ facial reconstructions of three individuals – including one respectfully named “Aunty” by Rangitane elders – resemble the people of East Polynesia.

And by all evidence, for the first few generations life was good for this early community.

Buckley’s team’s research reveals a healthy population, tall by Polynesian standards, muscular and fit. Fractured bones appeared to be well healed, although Buckley found evidence of osteoarthritis and gout among some people.

For a while, food was in abundance. Vast mussel shells 15 centimetres long lie among bones of fish, moa, seals, dog, rats and, even, Haast’s eagles. Storage pits and tools suggest agriculture was successful. Further, says Jacomb, “One of the greatest indicators of a time of plenty is the level of ornamentation that is found. People have the time to invest in artistic production.”

This early period saw intricately decorated ornaments and jewellery, with motifs typical of those found in similarly aged sites in eastern Polynesia. Among Jacomb’s favourite finds was a delicate necklace created from more than 100 tiny dolphin teeth, each drilled with the finest of holes.

“I just love the image of someone sitting there, meticulously drilling all those holes.”

But perhaps most telling of the ample food supply are the colossal ovens detected by a magnetometer (a modified land-mine detector).

They measure around five metres in diameter and the one that was excavated is lined with small boulders – without this reinforcing, the gravel-soil walls would have collapsed. Each would have been capable of cooking food for hundreds of people. And there were five of them. There’s no evidence of such large ovens previously in Polynesia.

However – or perhaps consequently – it appears food supplies may have declined quickly, with local moa perhaps gone within as few as 10 years, believes Jacomb, and, almost certainly, within a generation meaning people may have had to travel further afield to obtain food supplies. This, alongside Buckley’s isotopic tooth and bone analysis, raises some intriguing possibilities. 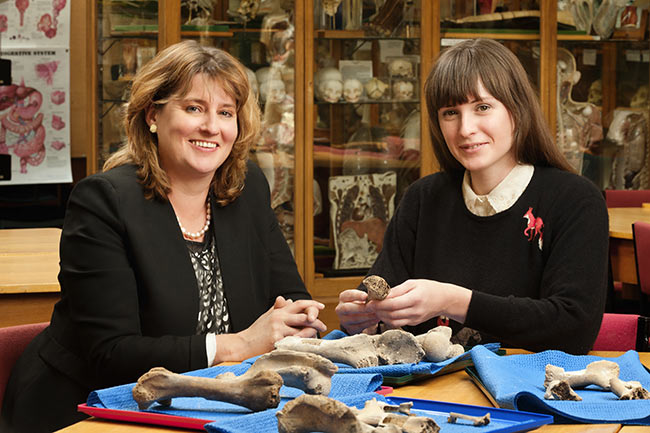 “Aside from the founding group, the human isotope evidence loosely formed three groups – those who were eating lots of moa, those who ate mostly marine mammals and those whose diets suggest inland freshwater resources and moa,” she explains.

“This is quite a mystery. Did the diets of the villagers change dramatically? Did they migrate from other areas in New Zealand to this site? Or did these groups live elsewhere and have their bodies brought here to be buried?”

And while these questions are being posed, it turns out the team has only scratched the surface of the answers the bar may yield. While the original area explored by Duff was believed to be damaged by a farmer’s plough in the 1920s and exhausted by previous investigations, the Otago team discovered the actual village site was about four times its previously-known size. The opportunities for further research are countless, says Jacomb.

With Rangitane, the team are scoping out further projects, such as examining the role of the site in its wider environment. Pollen and macrofossil studies might help describe the vegetation and physical setting of the place. Stable isotope studies can tell us more about the movements of the people, and analyses of the food remnants found at the site contain evidence of seasonality and hunting strategies. Further excavations are providing a better understanding of the layout of the village which is one avenue to learning more about the social structure of the community.

Indeed, as a sense of the lives of the Wairau Bar Māori is beginning to take shape, it is the iwi’s increasing curiosity to learn more that has provided important impetus for further studies. Richard Bradley even posits the idea of developing the tourism potential of the landmark site – “It’s our Plymouth Rock” – to ensure it gets the recognition it deserves.

And it suggests that the 70-year hiatus in analysing New Zealand’s earliest archaeological evidence may have been time well spent.

Rediscovering the Wairau Bar now has enabled more than the use of modern DNA, bioarchaeological and archaeological methods to tell a richer and truer story than would have been possible in the 1940s. It has enabled a coming of age for a partnership between researchers and the indigenous peoples whose histories are being scrutinised. In doing so, the understanding of the lives of Māori some 700 years ago has become rooted, very squarely, in both the science and sensibilities of the present.