Otago plans to develop a new centre for fault and earthquake science to focus the University’s existing wealth of expertise and to facilitate new research.

Funding is being sought through the Annual Appeal to support a recent donation towards establishing a new Chair in Earthquake Science, a position that would provide necessary expertise in earthquake seismology and become the nucleus for current and future research.

“Over the last two decades we’ve been working towards a fundamental understanding of faults and earthquakes,” says Head of the Department of Geology Professor Dave Prior.

“We are now aiming to develop a centre of excellence in the scientific understanding of faults and earthquakes. We may not cover every aspect of them, but we would have a core of the key disciplines required to understand the essentials.

“It would be a focus for research and for interaction with other centres, both in New Zealand and internationally, and would attract international visitors.

“What we need is a world-leading earthquake seismologist to add to our existing expertise, and someone with the time, energy and vision to develop the centre [for fault and earthquake science].” – Professor Dave Prior.

“There are lots of different angles to fault and earthquake research, but by the nature of the people we already have here at Otago, research will focus on gaining a fuller understanding of fault structure and the processes that occur on faults and contibute to earthquake phenomena.

“Although we are less involved in applied earthquake science, it is crucial that our basic research informs applications such as hazard assessment and mitigation. Involvement of the centre in outreach programmes and strategic collaborations is probably the best way to enable this transfer of knowledge.

“Our hope would be to collaborate very strongly with other groups in New Zealand, around the Pacific Rim and around the world.”

Recruiting the right person for the new chair would be vital, says Prior.

“What we need is a world-leading earthquake seismologist to add to our existing expertise, and someone with the time, energy and vision to develop the centre.

“Otago has a long history of making significant contributions to the understanding of faulting and earthquakes in New Zealand and, more widely, in the Pacific Rim, and is an excellent base for someone to explore these phenomena.”

Several emeritus Geology professors have completed ground-breaking work during their careers, says Prior.

“One of the things that [Professor] Rick Sibson emphasised was that movement of fluids, such as water, can be driven by earthquakes and can potentially control the behaviour of earthquakes. Furthermore, Rick showed how faults and earthquakes might be related to the generation of exploitable mineral deposits.

“[Professors] Alan Cooper and Richard Norris, among other things, have completed some of the most seminal work on the structure and history of the Alpine Fault.”

Now current academics are building on their knowledge, not just in the Department of Geology, but also across the University.

The School of Surveying and departments of Geography, Marine Science and Mathematics and Statistics, and the Crown Research Institute GNS Science are all working on research that ultimately relates to faults and the earthquake process, says Prior.

A crossdisciplinary approach is necessary and the new Otago centre is proposed to provide just that. 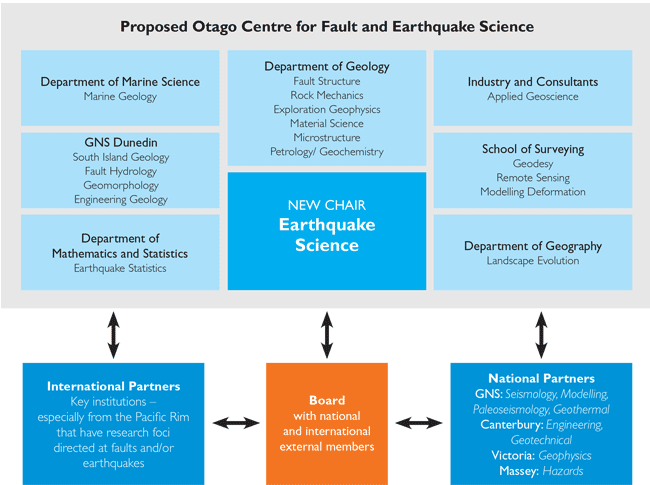 “A new chair needs to provide a focal point for all the existing work so that we can continue to make a substantial contribution to understanding faults and earthquakes.”

Research is vital because we know so little, says Prior. “It’s important to understand the level to which we don’t understand faults and earthquakes.

“There are a whole lot of processes that go into making an earthquake and a particular fault. For example, tens of thousands of big earthquakes have gone into the creation of what is now the Alpine Fault. We have some particular difficulties in understanding how the continual creep of the lower, deeper part of the Alpine Fault drives the stop-start behaviour of the upper part.

“Also, when an earthquake happens, we don’t actually understand how all the energy involved is used up in terms of movement on the fault, breaking rock or generating seismic waves.

“The range of questions inevitably requires a multidisciplinary team to try to get a handle on the whole thing. That’s the appeal of having a centre that has a focus on fault and earthquake structure and processes.

“You can tap into different expertise, different ideas and then, because of national and international links, you can broaden the research to include a worldwide team trying to contribute to the same aim.”

In time, it is hoped the Otago centre would become an international hub for fault and earthquake science, providing New Zealand-based research leadership, advanced training for graduate and postgraduate students, and a knowledge base for users in industry, Crown Research Institutes and government.

Prior says that Otago already has wide-ranging expertise, research experience and drive.

All that is needed to establish the centre is improved academic depth in earthquake seismology and the right leadership to capitalise on existing strengths.

MRI benefits for all