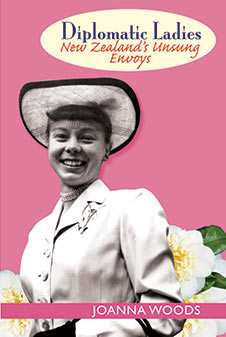 Hostesses to prime ministers and princes, and witnesses to revolution and war – diplomatic wives are often in the front line of their country’s diplomacy. Yet their presence has been ignored by historians and their testimony rarely heard.

Diplomatic Ladies tells the true story of New Zealand’s diplomatic wives and daughters over nearly 100 years, starting with the appointment of New Zealand’s first High Commissioner in 1905 and ending on 11 September 2001.

Based on private letters, MFAT archives and personal interviews, this book gives a unique insight into the workings of the diplomatic world. It also records such little-known episodes as the perils faced by spouses in Saigon and their role during the first Gulf War.

Writing with all the authority (and irreverence) of an insider, the author does not shrink from recounting a few incidents in which wives or partners have been less than diplomatic. Nor, as a former diplomatic wife, does she pull any punches about the downsides of a diplomatic career.

Joanna Woods was born in Dublin, but has been based in New Zealand for many years. During her husband’s diplomatic career, she lived in Bahrain, France, Greece, Iran, Italy, the United States and Russia. 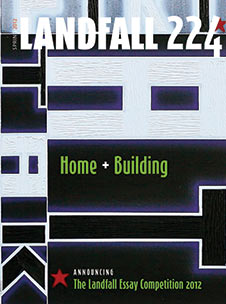 Home is a classic Landfall “Open House” issue, where anything and everything goes. Submissions poured in on every topic conceivable and the result is a feast of good writing and imagination.

Courtney Sina Meredith, Emma Barnes, Kay McKenzie Cooke, Tony Beyer and C.K. Stead (among others) have new poems exploring topics as disparate as the body, the corner dairy, “cloud” technology, silent film stars and more. There is also a wealth of short stories: Vivienne Plumb’s “The Cabin Trunk”, David Herkt’s story set in the rarefied world of the uber-wealthy at the height of the financial crisis and Laura Solomon’s futuristic piece about a Kiwi cult that breeds “shumans” (sheep/humans).

There are considered reviews by John Horrocks, Peter Simpson and others of recent New Zealand books and Martin Rumsby investigates moving image installations. As for art, Anita DeSoto’s other-worldly paintings and Darryn George’s unique blend of geometric abstraction and kowhaiwhai offer contrasting samples of contemporary painting. And Landfall 224 announces the winner of the Landfall Essay Competition 2012.

For further information and more books:

Mothering Matters: the sources of love, and how our culture harms infants, women, and society, by Peter S. Cook, Freedom Publishing, Balwyn, Vic, 2011.

Welcome to Our World? Immigration and the Reshaping of New Zealand, by Paul Spoonley and Richard Bedford, Dunmore Publishing, October 2012.

Specters of Violence in a Colonial Context, New Caledonia, 1917, by Adrian Muckle, University of Hawai‘i Press.

Alumni: If you have recently published a book, email the editor at mag.editor@otago.ac.nz