Surveying the past... and the future

Surveying the past… and the future

Otago’s School of Surveying is about to celebrate its 50th anniversary.

Delve into the history of any of the University of Otago’s specialist schools and you are likely to find they owe much to a central figure who, through a mixture of providence and sheer force of personality, played a key role in bringing it to fruition. 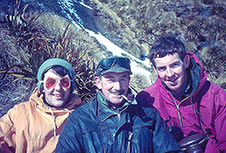 This year the School of Surveying marks its 50th anniversary and any discussion of its history inevitably revolves around the late Professor John Mackie.

A local, he was educated at Maori Hill School and then Otago Boys’ High School, before gaining an MSc with first-class honours in geology at the Otago School of Mines, and an AOSM and BE in mining.

After graduating in 1935 he headed for Malaya, working in the prospecting business and then became an inspector of mines within the Colonial Service. War soon intervened and Mackie, who held the rank of captain, was captured in Singapore and ended up a prisoner of war.

In 1946 Mackie returned to Otago, becoming a lecturer in mine surveying at the School of Mines within the Faculty of Technology.

By the early 1960s the faculty was being dismembered and Mackie found himself involved in shaping the fate of surveying. Otago and Auckland were vying to host the discipline and, when Otago prevailed, Mackie was appointed head of the new Department of Surveying which was to open in 1963.

A three-year diploma course was launched to replace the cadetship scheme under which surveyors learned on the job. The intake was small initially, while the old cadetship system wound down, but by 1968 first-year student numbers had reached 30, taught by a staff of six.

In 1969 a BSc in Surveying was offered alongside the DipSurv, the degree requiring two additional maths papers.

About this time the school moved into new premises in a converted bakery on the corner of Union and Great King Streets, a site it would occupy until 1993 when it moved to Castle Street.

A four-year Bachelor of Surveying (BSurv) degree, introduced in 1975, was something of a legacy from Mackie who retired the following year, although he maintained an active interest in the profession.

Mackie was replaced by Basil Jones who also went on to enjoy a distinguished career with the school, before being appointed Assistant Vice-Chancellor in charge of Sciences in the 1990s.

Professor John Hannah was the next to take over the school, retiring only last year. His association with Surveying started in 1968, completing his intermediate year before gaining entry to the three-year degree. In 1971 he, along with Bill Van den Berg, now a practising surveyor in Christchurch, became only the second and third surveying students to pursue postgraduate study.

A taste of professional practice followed from 1972-76, before postgraduate study overseas. He eventually returned to Otago in September 1993 and was head of department until the end of 2004 when he stepped aside both to concentrate on PBRF-related research and to allow the University to begin the process of recruiting a new dean who would lead the school into the next phase of its development.

He was in charge during a period of marked change for the school in terms of teaching, technology and students, and it was during that period that Surveying made the transition from being a department to being a school in 2000.

In terms of technological changes, Hannah highlights the development of GPS, which has gone from a powerful research tool – used only by specialists – to something in everyday use.

"We have always said that the GPS system was a solution looking for a problem and, as the years have gone on, we have found more and more problems its positioning capabilities can help us address."

Another big change during his time was the increasing number of young women pursuing a surveying career.

"I think the basic reasons for people studying surveying remain the same. Typically they want an indoor/outdoor job, they want variety in what they do, they want to be well paid and they are all-rounders – that is, they can handle the English and the mathematics together. The best surveyors are very good all-rounders and that hasn't changed."

Hannah says the school gets around 70 per cent of its students from just 30 per cent of the population pool. Only about 30 per cent of students come from the larger centres such as Auckland, Hamilton, Tauranga, Palmerston North, Wellington, Christchurch and Dunedin. The rest come from semi-rural areas.

"Youngsters who come off farms or from rural areas like the outdoor career option."

Long-serving senior lecturer Dr Mick Strack is involved in planning for a conference and reunion in August to mark the school's 50th anniversary, as well as to celebrate the 125th anniversary of the Institute of Surveyors.

Strack, who is preparing a book for the anniversary, says the school has produced approximately 1,500 graduates and nowadays has a yearly intake which is limited to 60 students taught by 14 academic staff, with three technical officers who look after the equipment, practicals and field camps.

"In the last 10 to 15 years we have been able to claim full employment for our graduates – there has been big demand for them, in spite of the downturn."

He attributes this to the fact that the school has always run a practical, field-based programme, although much has been added to it.

"For example, I teach land law, property rights and planning, so there is a lot more focus on legal, planning and design aspects as well as the technological aspects."

Staff expertise has also broadened with the addition of remote-sensing experts, who work with satellite and aerial imagery, interpreting aspects such as glacial retreat, snow cover, water cover and soil-water content.

Strack says the way that Otago has mainatined its professional course approach differs from many departments around the world – who now call themselves departments of geomatics – to try to show the spatial and scientific aspects to the discipline.

“Survey departments in Australia that have changed to geomatics have not flourished and are not producing the numbers of surveyors required. That's why our graduates are in huge demand. Even our third-year students are being plucked up for summer jobs in Australia.”

New dean Professor Christina Hulbe, who began her leadership of the school early this year, says the school’s effort to find a balance between research and undergraduate teaching differentiates it from others.

"I think it’s a tricky balance to maintain both, especially in a world where research is increasingly the measure we use to evaluate how a department is performing," she says.

"Research is important because, in part, it does improve teaching and it does improve opportunities for students. Universities are in the knowledge business and knowledge is always changing, so we're also in the transformation business. You need the research part to illuminate the future and point the way to what's going to be happening next in the discipline."

Hulbe says geospatial analysis, for example, is only going to become more important in the years ahead. People doing research in this area are developing new tools and new ways of thinking.

"I think we have a good programme in that area now, but it is smaller than it could be and it is certainly a priority to see it grow. That will benefit students because, increasingly, they need spatial analysis skills in the workplace. It is also a good direction for research – developing new ways of using geospatial information. All of the Prime Minister’s new National Science Challenges, for example, have a geospatial context.

"It is important for students to see and do geospatial analysis while they are in school because their future in either the public or private sector will, in some way, be defined by that."

Hulbe says geospatial analysis is a tool that can be used to address many earth science and social science questions, including those around urban planning and design, and the sustainability and resilience challenges of the 21st century.

"It's not just megacities – it's Dunedin-sized cities too. Half the world's population lives in cities like this.

"Thinking carefully about how cities function matters in this century and the School of Surveying has a role to play in that."

One of the things that has drawn her back to Otago, after being here on sabbatical in 2009, is the University's commitment to real, live teaching and the connection between research and teaching.

"Students are better off for that synthesis. It’s what a university is supposed to be."