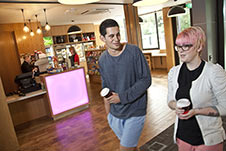 Since it opened earlier this year, the University’s new Marsh Study Centre has proved a hit with students. Redeveloped from the former Gardens Tavern, the facility provides a well-appointed study area with over 830 square metres of space for up to 220 students, with wi-fi and great views of the Dunedin Botanic Garden.

Facilities include a café on the ground level and a sitting area facing the gardens furnished with indoor and outdoor tables, chairs and comfortable couches. Upstairs there is a large open study area with comfortable study booths, and a series of interconncted smaller rooms and spaces.

The new centre is named after Dunedin’s Marsh family who made a substantial donation towards the cost of the project. 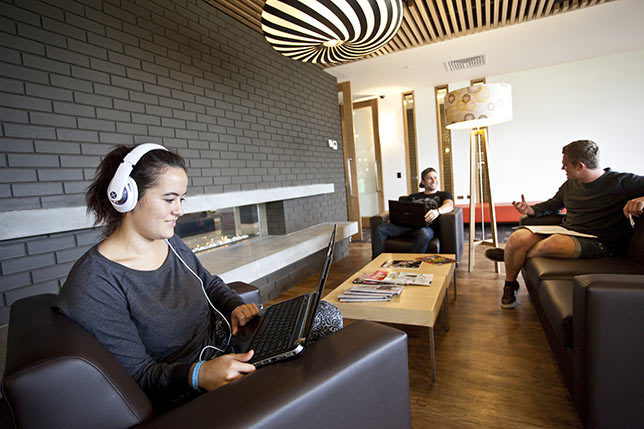 The University’s Economic Impact Report for 2012 estimates that the overall direct impact of the institution to Dunedin and other centres in New Zealand rose to $897 million last year.

The report measures actual expenditure by the University, combined with estimated spending by its staff and students.

As in previous years, in 2012 the vast majority of this money flowed into the Dunedin economy, with total expenditure valued at $800 million. Expenditure in Wellington was estimated at $47.1million; in Christchurch, $46.2million; Invercargill, $3.5million; and Auckland, $600.000.

Vice-Chancellor Professor Harlene Hayne says the report underscores the University’s significant contribution to the Dunedin economy and to the other cities in which it has a presence.

“This report highlights that the University is more than a facility to benefit students, staff and society through the very high standard of our teaching, research and graduates. It also plays a fundamental role in the ongoing vitality of Dunedin’s economy, in particular.

The report further notes that the wider flow-on effects of the University’s activities are even greater, noting that the impacts are far-reaching across many sectors of the economy, with the institution, its staff, students and visitors spending widely in local businesses.

After these flow-on or indirect downstream impacts were taken into account, it is estimated that the University’s economic impact was worth $1.662 billion overall in 2012.

The University featured among the top 100 institutions in the world in 12 subject areas in a recent international university rankings exercise.

The 2013 QS World University Rankings by Subject revealed that Otago has improved its 2012 ranking in 11 of the 30 subject areas under evaluation and is now among the top 50 institutions worldwide in four subjects. These four include psychology, which at 15th place, is the highest ranking of any subject area at a New Zealand university.

At 24th, Otago also ranked highest in New Zealand for history and archaeology. The University’s other two top 50 subjects were law and legal studies (32nd) and English language and literature (45th).

The QS rankings involved the evaluation of 2,858 universities and ranking of 678 institutions in total. They take into account the opinion of academics and employers via a global survey and research-paper citation data.

The high-quality space provided by the University of Otago Plaza adjacent to Forsyth Barr Stadium was recognised in the latest New Zealand Institute of Landscape Architects Awards.

Architectural and design firm Jasmax won an Award of Excellence at the institute’s annual Resene Pride of Place Awards for design work on the plaza area.

The institute’s lead judge for design said the plaza space provided many functional social areas for use by university students and a “high-quality space” had been developed.

Students in the Otago University Debating Society have shown they are truly world-class after placing highly in several international competitions.

In an extraordinary showing, one of the three Otago teams competing in January’s World Universities Debating Championship in Berlin finished in the top four. All three teams made the top 48 among 400 teams, a feat that large universities such as Oxford, Cambridge and Sydney failed to match.

The two members of the Otago A team later competed in two elite debating tournaments hosted by liberal arts universities in upstate New York. They placed first out of around 60 teams in the Colgate Intervarsity tournament and fifth in the Hobart and William Smith Round Robin, an elite invitational tournament.

In the latter tournament, BA/LLB (Hons) student Alec Dawson and medical student Kieran Bunn were ranked among the top 10 best speakers. The pair was up against teams from Oxford, Yale, Cornell, Harvard, and a number of Asian and South African universities.

Otago Business School students have also recently shown their competitive prowess, with an Otago team beating out around a dozen others from Europe, Asia and the Americas to win the Scotiabank 24th International Business Case Competition, held in Canada.

Karl Lyons to the University’s Chair in Restorative Dentistry in the Department of Oral Rehabilitation. Professor Lyons is a long-standing member of staff at the Faculty of Dentistry and was chosen from a strong field of international applicants.

Rachel Scott as the Publisher of Otago University Press. Ms Scott comes to Otago from a similar role at Canterbury University Press and succeeds Wendy Harrex, who recently retired after 20 years in the position.

Vice-Chancellor Professor Harlene Hayne as one of the three new non-executive members of the New Zealand Treasury Board appointed this year. She was also recently re-appointed to the Board of Fulbright New Zealand by the US Ambassador to New Zealand

Professor Rosalind Gibson (Human Nutrition) was awarded the 2013 Kellogg International Prize in Nutrition by the American Society of Nutrition (ASN). The honour recognises her work in micronutrient nutrition, delivering advanced nutritional assessment courses in Africa and South-East Asia, and her authoritative text Principles of Nutritional Assessment.

Professor Tony Binns (Geography) received the New Zealand Geographical Society’s top award, the Distinguished New Zealand Geographer Medal in recognition of his "outstanding and sustained contributions and service" to geography and society. His citation noted that he is one of the most internationally distinguished geographers currently working in New Zealand.

School of Physiotherapy Deputy Dean Dr Margot Skinner has become the first person in the past 10 years to be awarded an honorary fellowship by Physiotherapy New Zealand. She was recognised for "outstanding" contributions in research, advocacy and academic fields, and in advancing both the physiotherapy profession and "population health internationally".

Geoff Kearsley (Media, Film and Communication) has been granted the status of Professor Emeritus by the University Council.

Former Otago Vice-Chancellor Dr Robert (Robin) Williams (93). Dr Williams took up the role of Vice-Chancellor at the University in 1967 and served until 1973. He was an eminent mathematician, physicist and public servant.

Emeritus Professor John Loutit (87). A pioneering, internationally respected microbiology researcher and an influential scientific teacher, Professor Loutit headed the Department of Microbiology for more than 10 years and served as Faculty of Science dean from 1973–75.

Noted botanical artist and conservationist Audrey Eagle and internationally leading physician and researcher Professor Helen Heslop (MB ChB 1980) had the honorary degree of Doctor of Science conferred upon them at graduation ceremonies in May.