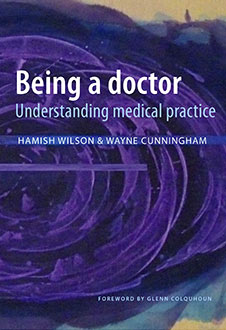 By Hamish Wilson and Wayne Cunningham

University of Otago lecturers Hamish Wilson and Wayne Cunningham present a fresh approach to medical practice in their new book, Being a Doctor: Understanding Medical Practice.

This insightful and informed account of what it is like to be a doctor is based on many years of teaching family physicians, and they argue that being a doctor is much more than simply knowing biomedical facts and having good clinical skills.

Being a Doctor explores principles and assumptions of modern medicine seldom taught in medical school, but which are integral to the day-to-day working life of health professionals.

Starting with the meaning of suffering and how the “science” of medicine has evolved, it examines the world of the patient, the world of the doctor and how these worlds intersect. Wilson and Cunningham use clinical stories to provide a fresh perspective on the work and role of the modern doctor.

Major challenges facing physicians include the doctor–patient relationship, the “heartsink” experience, and unwell patients for whom no disease can be found.

Caring for such patients can leave clinicians feeling overwhelmed. This book is an antidote – an invaluable tool for doctors in practice, students and doctors in training. Being a Doctor provides valuable insight for all medical professionals and is an enlightening read for patients and clinicians alike. 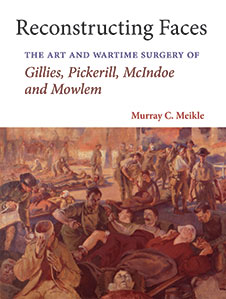 The art and wartime surgery of Gillies, Pickerill, McIndoe and Mowlem

The two world wars played an important role in the evolution of plastic and maxillofacial surgery in the first half of the 20th century. This book is about four of the key figures involved.

The author describes how these surgeons revolutionised plastic surgery and the treatment of facial trauma, working on soldiers, fighter pilots and civilians disfigured by bombs, shrapnel and burns. Eventually Gillies et al. were supported by a vast surgical enterprise that included surgeons, dentists, anaesthetists, artists and photographers, nurses and orderlies.

The text is fully illustrated with photos, drawings and case notes by the surgeons and war artists at military hospitals at Boulogne-sur-Mer, Aldershot and Sidcup in the First World War, and civilian hospitals at East Grinstead, Basingstoke and Hill End in the Second. The book includes a DVD of Rainsford Mowlem performing a variety of plastic operations in 1945.

This book is a must for anyone interested in the history of medicine and the treatment of casualties in the two world wars.

For further information and more books:

From the Big Bang to God: Our Awe-inspiring Journey of Evolution, by Lloyd Geering, Steele Roberts (NZ) and Polebridge (USA).

Early Medical Practitioners in the Manawatu and Palmerston North, by Richard Rawstron.

Little Truff and the Siamese Cat, by Ann Russell, AM Publishing New Zealand, 2013.

If you have recently published a book, please email the Magazine editor.