Whatever happened to Stuart House

Whatever happened to …
Stuart House (aka Arana Hall)?

As Arana College prepares to celebrate 70 years as a student accommodation provider, warden Jamie Gilbertson says the “characterful” facility owes much of its current success to traditions established over its long history. 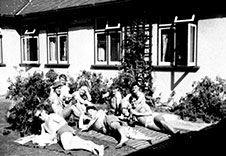 The Laurenson block intake of 1958, sunbathing.

To say that Arana College had humble beginnings is no understatement. In 1941, with less than £300 funding, founder Presbyterian minister the Reverend Harold Turner established Stuart House at 638 Cumberland Street. Turner was aware that an accommodation shortage had arisen and his previous experience as an assistant minister at Knox College had given him an appreciation of the positive impact residential life could have on students.

At Stuart House furniture from auction sales bedecked the rooms, donated blankets warded off the cold for its 20 or so residents, and the unsalaried Turner received £1 per week accommodation supplement for himself, his wife and young daughter.

It soon became apparent that the facilities could not meet demand and, by 1943, Stuart House was re-established to its present site in Clyde Street and given the name Arana Hall (now Arana College). The centerpiece building – a Queen Anne-style mansion – was the former stately home of Member of Parliament, Minister of Defence and University of Otago Chancellor Sir James Allen. “Arana” was a Māori transliteration of his name.

The next significant construction work for the current main block took place in the 1960s with much of the development funded by the Colombo Plan – a scheme that assisted students from developing nations in studying at Western universities. By the late 1960s, when the Bates and Colombo accommodation wings were opened, Arana’s basic layout had been set and accommodation for about 140 residents was provided.

An incident at the opening of the new wings is typical of a long tradition of hi-jinks providing a foil to studiousness – as Sir Keith Holyoake (who was carried to the ceremony on a litter) unveiled the foundation plaque a risqué image was revealed, placed there by a resident practical joker.

During his 12-year tenure as warden, Gilbertson has come to realise that antics and academic achievement have always co-existed at Arana.

“There is an engrained character at the college and a scallywaggery that goes back to the first students. Arana was an all-comers hall with students straight from home and others returning from war so, while they studied to gain vocations, there was also some thumbing of the nose at authority.

“Once a group of students were crossing the Leith when they found a large eel. It was put in a sugar sack and later placed in matron’s bath. The boys waited nearby for the scream, which duly came. That story is one of hundreds.”

The Arana rugby team before a match against Carrington in 1959 (Arana won 17-5).

Evident in the group photographs displayed in the college’s trophy and history room are several shifts in the make-up of residents. Over time, the starched white collars and matching black ties gave way to more informal attire, the college became more ethnically diverse and, in 1978, female students were admitted for the first time.

“Whereas boys once arrived by steam train or bus with a small suitcase, today’s residents might fly in with a bike or a snowboard,” says Gilbertson. “But their reasons for being here are the same. They arrive to study dentistry, medicine, physical education and teaching. While the antics have largely disappeared, they remain a highly spirited bunch.”

The recent addition of the Leithview and Rawiri wings has seen the college’s numbers swell to 401, comprised primarily of first-year students, but also Foundation students (including Pacific Islands and Māori students studying pre-health-sciences courses), and returning and postgraduate students and staff.

“We have a true cross-sectional slice of New Zealand society and we are lucky to have that representative diversity. It continues the college tradition of always having been a place for hardworking all-rounders.”

With some pride, Gilbertson describes academic achievement levels at Arana as “stunningly high” – in 2012, 48 per cent of the papers sat by students resulted in A- and above grades. 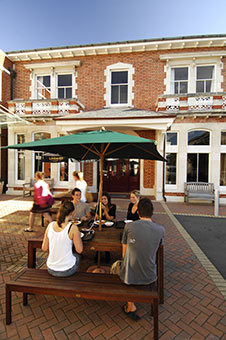 It is easy, once the history is factored in, to reconcile the college’s current status as a sought after residence with its “humble beginnings”.

“Turner, subsequent wardens and the Stuart Residence Halls Council had a vision for social mobility and betterment through education, and it didn’t matter what people’s parents did or where they were from,” says Gilbertson.

“The guiding vision was ‘come and join this community, do your best, then do well in the wider community’.

“People ask why the college is successful, and part of it is knowing where we come from and applying that vision and direction in a modern setting.”