Celebration of the century

Celebration of the century

Movie stars, stolen pie carts and a cast of talented performers – Allen Hall Theatre has seen its share of drama in the last 100 years, both on and off the stage.

Theatre Studies alumni are among those receiving a callback this year to help celebrate the centenary of Allen Hall Theatre.

“There are going to be performance events and interactive events, a cocktail party to launch the reunion, a formal dinner, open mic speeches, semi-informal performance and short pieces, which will be pulled together at the weekend,” says head of the Theatre Studies Programme Hilary Halba.

Nearly all the events will take place at Allen Hall Theatre – the rooms downstairs will house exhibitions and memorabilia, such as theatre posters and photographs of events and alumni, while upstairs there will be spontaneous performances by former students and others who have worked at the theatre.

“This is Theatre Studies. They're not shy,” says Associate Professor Lisa Warrington. “There should be an exciting array of skills and talents there.”

More than 200 people have already registered interest for the event, which will be held on September 12–14 and is open to anyone with a connection to Allen Hall Theatre.

The building, originally named Allen Hall after Dunedin politician and former University chancellor Sir James Allen, was designed by architect Edward Anscombe and served as the Student Union until 1960.

The heritage building with the distinctive red door became the centre for drama in the 1980s, and the Theatre Studies programme grew from there. 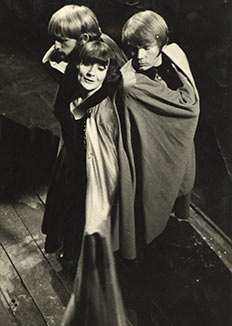 “When I first arrived, the building was locked up and virtually unused,” says Warrington, who has been a major part of the programme since 1981. “There were just a few shows in the year such as the annual show for language departments, the Music Department opera and occasional productions by OUDS – the student drama society.

“I regularly started referring to the building as 'Allen Hall Theatre' in order to put its use and function fair and square in the eyes and mind of the University and the town. This has led to some amusing moments where people assume that there was an individual called 'Allen Hall' and the joke has been used more than once that he must be Roger Hall’s brother.”

Allen Hall has since become one of the country’s busiest theatres, at one time staging up to three performances in a day – Lunchtime Theatre, the main bill in the evening and a late night performance. It also hosts visiting performers and is a venue for the Dunedin Fringe Festival and other events.

“Allen Hall is one of the foremost theatre laboratories in New Zealand,” says Halba. “It gives young actors and theatre practitioners a chance to experiment – to think out of the box 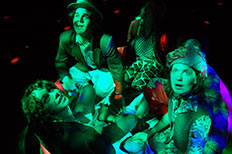 – with new works, playing with form or new modes of acting. That's much more difficult for mainstream theatres to do.

”Allen Hall has its own distinct personality, says Warrington. “It's a comfortable working space. It feels like anything can happen, whatever designers and directors imagine.

“It has no fixed seating so it's completely flexible. The audience can sit on the stage, you can have them sit around the action or have no seating at all. It’s a continual surprise.”

One of the Theatre Studies programme's biggest achievements over the years has been Lunchtime Theatre, which was established in 1977 and is a weekly event during 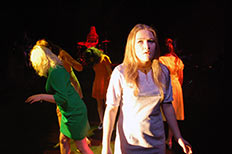 semester time. It mainly features short, original works by students or New Zealand playwrights, which are often produced, directed and performed by Theatre Studies students as part of their course work.

“It's a great testing ground for students,” says Warrington. “And it’s a great learning space for people who might go on – actors, writers, playwrights and technicians.”

The Theatre Studies programme has contributed plays as well as people to the industry, commissioning works to be written specially for Lunchtime Theatre. The book Playlunch features five such plays, including Fiona Farrell’s Chook Chook, John Broughton's The Private War of Corporal Cooper and Simon O’Connor’s An Illustrated Death of Eddie Fivetrees, which have been performed many times at Allen Hall and throughout the country.

“It’s one of the top theatre programmes in New Zealand,” says Halba. “This is the only university that offers a Bachelor of Performing Arts and a Masters of Fine Arts in Theatre Studies.”

Although some staff offices are now based at another facility, Allen Hall is still the heart of Theatre Studies, says Warrington, who is preparing a book for centenary attendees that will feature the history and highlights from the last 100 years, including a visit from Hollywood royalty.

“Laurence Olivier and Vivien Leigh were on their tour of the Commonwealth countries in 1948 and were in Dunedin to perform,” says Warrington. “They came in to address the students when Allen Hall was still functioning as the Student Union. There was standing room only at the time.”

Alison Finigan, head of Alumni Relations, has been collecting anecdotes from former students and other alumni about their experiences at Allen Hall.

“Before Allen Hall became the home of the Theatre Studies programme it was used for plays put on by the Otago University Drama Society (OUDS) or students in the Languages departments, or Music Department operas and concerts of various sorts. It was also used regularly for student dances or 'hops' as they were called,” she says.

“I remember someone telling me about how one evening, many years ago, the students from the School of Mines hijacked the horse-drawn pie cart, which was parked up in the Octagon, and brought it to Allen Hall to provide pies and chips for the hungry revellers at one of these hops,” says Finigan.

“The horse was allowed to graze on the lawn outside the Registry while the pies were heated via a hook up from the cart to the gas tank in the School of Mines. This story has become a legend, but I'm not sure of its veracity.”

Another unproven tale is that of the theatre's ghost – a shadowy figure who does “wonky” things, says Halba. “It did something to the lighting board once that mystified the technical manager who came down to check it out. It came right the next day.”

The centenary will provide a unique opportunity for people to share their own favourite memories and moments.

“Allen Hall Theatre is certainly one of the oldest working theatres in the country and one for whom a great many people have a huge fondness,” says Halba. “This centenary is going to be an extraordinary occasion.”

The Theatre Studies programme has nurtured many talented students over the years. Some of its successful graduates include:

To register for the centenary celebrations or submit an anecdote, email Alison Finigan at the Development and Alumni Relations Office.