When newly-wed artist Charlton Edgar immigrated to Dunedin with his wife Mona in 1931, the city was a hotbed of artistic endeavour.

The Dunedin School of Art at King Edward Technical College had been re-invigorated with the arrival of R.N. Field and W.H. Allen, art teachers from England who advocated the tenets of modernism. Replacing Allen as painting instructor at the school, Canadian-born Edgar instilled in his students, who included Doris Lusk, an enthusiasm for landscape painting and an appreciation of Central Otago. 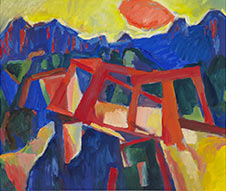 After moving to Auckland in 1941, where Ralph Hotere, Para Matchitt and Stanley Palmer were among his pupils at the Auckland Teachers’ College, he returned to Dunedin to take up the position of director at the Dunedin Public Art Gallery in 1965.

The legacy of this cosmopolitan couple lives on at the University of Otago through a substantial gift of 347 artworks donated to the Hocken Library. Edgar’s wife had stipulated the gift before her untimely death in 1961. Named the Mona Edgar Collection in her memory, their art collection reflects the pair’s wish to acquire the best representative works by New Zealand artists of the era with a bias towards the contemporary.

Works in the collection range in date from the early 1920s to the late 1950s, incorporating, as Edgar stated, “all the ‘isms’, 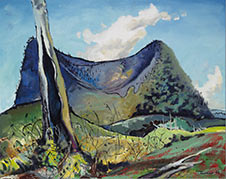 particularly expressionism in its various manifestations”. Although Edgar credited his wife with shaping the collection, he would later donate a further 46 paintings and three pieces of sculpture to the Hocken to help “fill out” their initial holdings.

The Bridge, a semi-abstract painting by the Lithuanian-born artist Rudi Gopas who taught at the Canterbury School of Art, is one of the most daring works acquired by the Edgars. Its striking use of colour and crude distorted form recalls the work of the influential group of German expressionist artists known as Die Brucke (The Bridge).

Echoing Edgar’s predilection for landscape painting, the Mona Edgar Collection is dominated by images of the New Zealand countryside and its iconic vegetation. It includes a substantial oil painting of cabbage trees by Russell Clark, 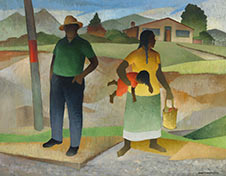 The collection contains a representative assortment of Edgar’s paintings as well as several portraits of Charlton and Mona and landscapes by R.N. Field in his characteristic post-impressionist style. A selection of lithographs by the Wellington-based artistic couple, Juliet Peter and Roy Cowan, and five wood-cuts by

The Edgars’ remarkable gift was instrumental in transforming the historical character of the Hocken’s foundation pictorial collection gifted by Dr T. M. Hocken. More than half a century later works from the Mona Edgar Collection remain invaluable aids for teaching and research, and the Pictures Collection Development Policy encourages the ongoing acquisition of contemporary art.

The Mona Edgar Collection continues to be showcased in exhibitions including the popular Place Makers show that has recently concluded at the Hocken Gallery.