Even though Allan Portis is a great supporter of the modern University of Otago, part of him remains nostalgic for the way he was able to both study and learn his profession hands-on. 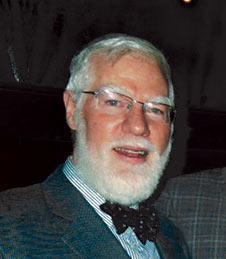 Allan Portis:"I liked it so much I stayed on and studied for an arts degree as well!"

Today Allan Portis is a mainstay of Otago's alumni group in Canada, where he made his home back in the 1970s while forging a highly successful career with The Bank of Nova Scotia.

His own experience of gaining accounting qualifications in the 1960s was quite different to that of today's commerce students.

Growing up in the tiny community of Pukeuri, near Oamaru, both he and his twin brother wanted to be accountants. That opportunity came through the Dunedin firm Barr, Burgess & Stewart – the present day PricewaterhouseCoopers.

"In those days when you did accounting you worked for an accounting firm. The office was very structured. You sat at the front and then the next year you moved back. People were at various stages of accounting and typically, in the fourth year, they took a year off and did it full time – which is what I did. I liked it so much I stayed on and studied for an arts degree as well!"

Study would start with an 8am lecture before work. There would be another lecture at 5pm after which he would go home, have dinner, head down to the library and study until 11.

"What did I take away from that? Hard work – no fooling around!" he laughs. "It actually was a wonderful thing. You had the partners there as role models and they taught part-time at the University so there was this real link between the University, work and study."

During his University holidays he would return to Pukeuri and its freezing works. "It was dirty monotonous work, but it gave me an extra incentive to get an education."

Like many young New Zealanders Portis felt the pull of the big OE. He had noticed that the young accountants who went to the UK, Australia and the States always came home, but the ones who went to Canada stayed. "So I thought there must be something in this."

After a stint in Melbourne with accountants Arthur Andersen & Co he joined their Vancouver office, before going on to the University of Western Ontario's Graduate School of Business in London, Ontario, where he gained an MBA. In 1975 he joined The Bank of Nova Scotia, beginning a 30-year career which saw him rise to become vice-president in its International Corporate Risk Management Division.

When Portis retired in 2005 he wanted to keep busy.

"I looked around and said: What got me here? I realised I owed a great deal to my New Zealand education.”

He is actively involved in supporting Waitaki Boys’ High School and getting involved with Otago alumni was another way he could give back.

Initially he served on the Board of the Alumni of the University of Otago in America Inc. but eventually joined forces with the now late Brian Merrilees, another alumnus from Toronto, to develop something with a more Canadian flavour.

Initially they had informal gatherings at a pub over pizza and beer. "The idea was to keep it informal and rely on Alison Finigan and her colleagues in the Alumni Office to handle our membership lists, donations and communications."

They eventually linked up with Otago's International Exchange Programme, which encourages third- or fourth-year students to travel overseas for a semester or two.

About 30 students a year head for Canada so they fund up to four Canadian Travel Awards of $NZ2,000 each. So far 10 recipients over the last four years have studied at universities across Canada.

"Canada has a lot to offer on the organisational, cultural and interpersonal side of things and it is a good place for students to gain life experience," he says.

He and his wife Santa also get involved by welcoming and hosting many Otago students when they first arrive.

The Dunedin connection remains strong and they have purchased a house in Dunedin where they live several months a year.

Portis also keeps busy writing a blog, with sensible management of money and giving back as key themes.

"Whether it’s health, wealth or relationships, a lot of folk get to retirement and say, 'I wish I'd done it differently'," he observes.

"The rules are fairly simple. It is about establishing the proper habits especially at a young age – and they say any habit can be changed in 21 days."