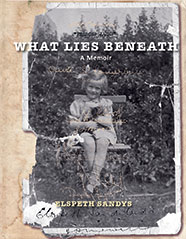 Writer Elspeth Sandys was born during World War II, the result of a brief encounter between two people who would never meet again. The first nine months of her life were spent in the Truby King Karitane Hospital in Dunedin, where she was known by her birth name, Frances Hilton James. This would change with her adoption into the Somerville family. A new birth certificate was issued and Frances James became Elspeth Sandilands Somerville.

Tom and Alice Somerville, Elspeth’s new parents, lived with their son John in Dunedin’s Andersons Bay. While Elspeth was happy among the ebullient and welcoming Somerville clan, she had a difficult relationship with her adoptive mother, who was frequently hospitalised with mental health problems.

Elspeth’s search for her birth parents did not begin until much later in her adult life. What she discovered after an exhaustive search provided answers that were both disturbing and, ultimately, rewarding. What Lies Beneath is a searing, amusing, and never less than gripping tale of a difficult life, beautifully told. 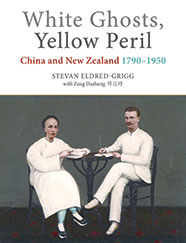 The Qing Empire and its successor states from 1790 to 1950 were vast, complex and torn by conflict. New Zealand, meanwhile, grew into a small, prosperous, orderly province of Europe. Not until now has anyone told the story of the links and tensions between the two countries during those years so broadly and so thoroughly.

This book is a highly readable portrait of the lives, thoughts and feelings of Chinese who came to New Zealand and New Zealanders who went to China, along with a scholarly, but stimulating, discussion of race relations, government, diplomacy, war, literature and the arts.

The Laws of Spaceflight: A Guidebook for New Space Lawyers,
by Jenifer Lamie, American Bar Association, 2012.