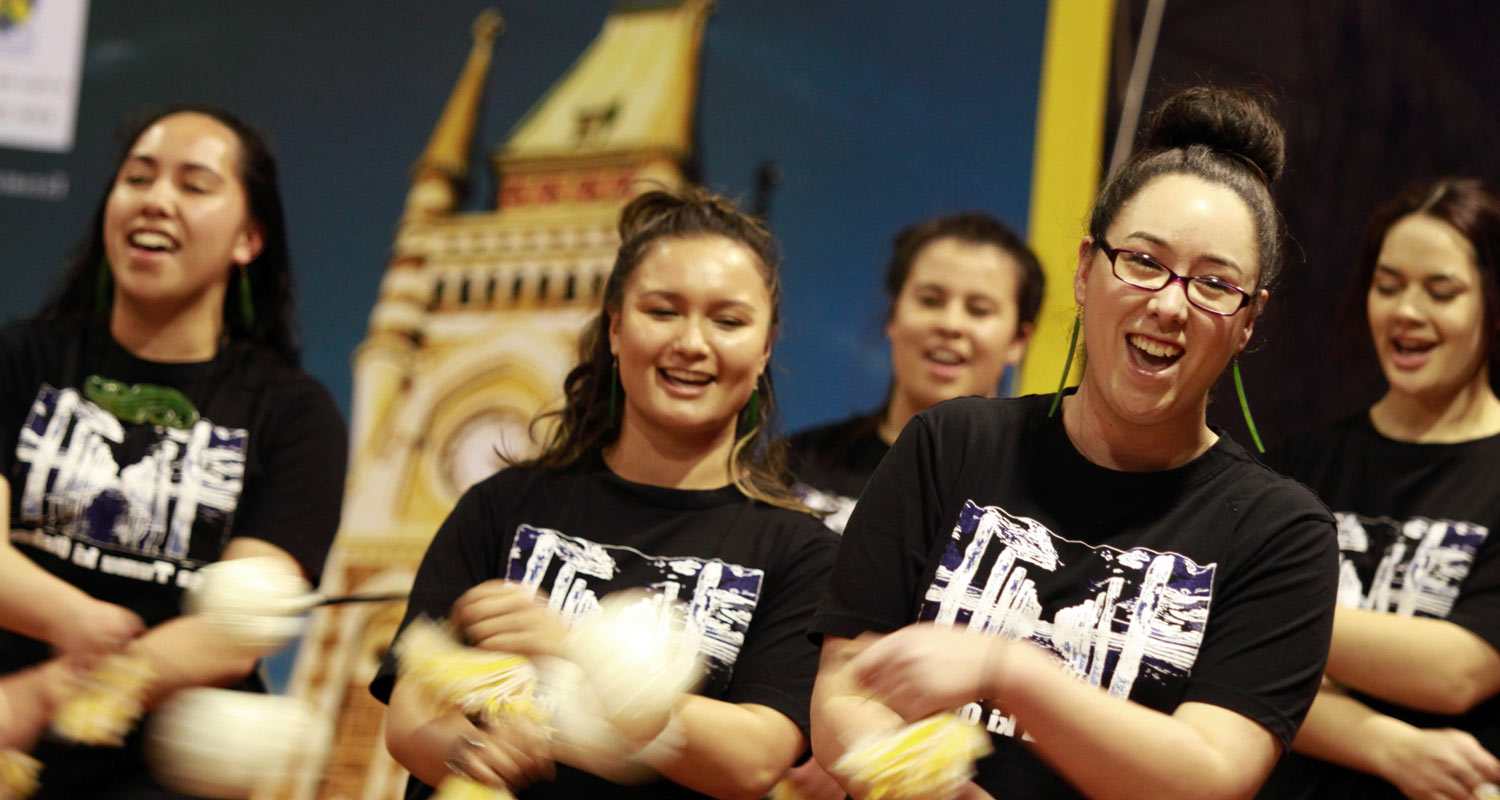 Over the past quarter century, Te Tumu: School of Māori, Pacific and Indigenous Studies and the Māori Centre (Te Huka Mātauraka) have played significant roles in assisting the University to fulfil an important focus of its strategic direction: to increase Māori student participation and achievement. They are holding back-to-back 25th anniversary celebrations 28-31 May.

Te Tumu: School of Māori, Pacific and Indigenous Studies traces its direct ancestry back to 1990, although the teaching of the Māori language at Otago started in the 1950s.

The first courses in te reo were community courses provided through the Department of University Extension from 1957. These evening classes for adult students were initially tutored by a respected Kai Tahu kaumatua from Otakou, Harold Tarewai Wesley.

The University began formal courses in Māori in 1977, when it commenced an introductory first-year course in Māori language and literature, taught by Dr Ray Harlow as part of the linguistics programme in the Department of English.

A first-year Māori language paper was introduced in 1981, also taught by Harlow, but restricted to 28 students until 1984. The lifting of restrictions – and demand for the paper – resulted in a second appointment, that of Godfrey Pohatu in 1986 as a permanent Māori Studies lecturer; his wife, Toroa Pohatu, became a lecturer two years later.

Strong student growth resulted in the establishment of the Department of Māori Studies in 1990, headed by Godfrey Pohatu; Harlow had departed for Waikato University the previous year.

Consistent demand for the courses saw first-year student numbers increase to 950 by 1994, when postgraduate courses commenced. New staff members were recruited to teach the expanding programmes.

In 1996, a chair in Māori Studies was created to head the department, which was located in the School of Languages. Professor Tania Ka’ai was the first dean, followed by Professors Paul Tapsell from 2007 and Michael Reilly from 2012.

When the Division of Humanities was restructured in 1999, a separate School of Māori Studies was established, with the name Te Tumu. The name references various Polynesian languages, meaning root, stump, stem, foundation or origin. One Māori definition – a post for tying up canoes – is explained as an encouragement to staff, students and guests “to anchor themselves to the school and use the resources and shelter it provides in which to base and fully immerse themselves in all the University of Otago has to offer”.

In 2000, Te Tumu shifted from a series of old houses near the Burns Building to the Richardson Building South Tower.

Te Tumu has a greater proportion of its students at first-year level, compared with other schools; many of the students come from other schools to take one or two papers in language and culture. Te Tumu had about 2,000 individual students at all levels last year, including 1,780 first-year students. They represented about 330 equivalent full-time students.

Reilly, who joined the staff in 1991, says that most of the students who do Māori Studies as a major are of Māori descent, but a large number of the students taking first-year papers, notably the introduction to Māori society paper, are non-Māori, many from overseas.

“Māori academics have always been very open and supportive of non-Māori students; you are very much a part of the group,” notes Reilly. “That’s certainly the philosophy here. In fact, the staff enjoy having a huge range of students from so many different areas. It’s quite stimulating.”

Reilly says that the students end up in all sorts of occupations: managers of iwi organisations, teachers, journalists, researchers, planners. “There are a lot of organisations that find it desirable for all sorts of reasons to have people with this sort of academic background.”

Reilly refers to the strong research culture that has developed at Te Tumu over recent years.

“In the 1990s, almost all of our postgraduate students would have been staff fulfilling postgraduate qualifications. So, it was very much a capacity-building situation. Whereas most of the staff now have PhDs, there is becoming a stronger research culture in terms of publications and research grants.

“And our postgraduate cohort would now be what you might call ‘real’ students. At the PhD level particularly, with the website and the staff with all their qualifications and areas of research interest, we are attracting more and more postgraduate students, not only from within New Zealand but from around the world.”

Reilly says that although most of what Te Tumu does is in common with other university schools, there are differences.

“As a non-Māori myself, I think the thing that distinguishes a department like Te Tumu is the cultural protocols. Not only do you teach it, but you are not really being consistent if you don’t attempt to put it into practice.

“A very simple but obvious example would be, when we have guests, we would have speeches in te reo, and maybe waiata, and a lot of food, because one of the key cultural requirements is hospitality or manaakitanga.

“If you look at the Māori language papers particularly, they would utilise cultural practices. For instance, if you were in a classroom where you had people at differing levels of competency, someone who was more fluent would work with someone who was less fluent.

“I guess you could say that’s some pedagogical technique, but it does also fit with Māori cultural beliefs about the older or tuakana sibling helping to guide the younger relative.”
Reilly predicts that Te Tumu’s next 25 years will build on the developments of recent times.

“Hopefully, alongside that, a continuing practice of what makes places like this unique in terms of how they manifest cultural values.”

The Māori Centre (Te Huka Mātauraka), which is slightly older than Te Tumu, is also belatedly celebrating its 25th anniversary.

The idea of a Māori Centre came from Māori staff and students, supported by the Assistant Vice-Chancellor (Humanities) and the Registrar, in the late 1980s. At the same time, the Government, acting on the Watts Report to the New Zealand Vice-Chancellors’ Committee, allocated equity funds to each university. As a result, the Māori Centre opened in an old house at 515 Castle Street North in 1989, using most of the Otago equity grant.

The centre was then managed by the Registry and co-ordinated by one staff member, who worked closely with the Māori liaison officer based in the Registry, and with the Māori Studies staff. Since 1999, it has operated under the management of Student Support Services.

Te Huka Mātauraka initially provided study rooms, emergency live-in facilities and a small library. Its primary aim was to help first-year students adjust to the University environment and support them in their studies, through workshops on examination technique and essay writing, and tutorials.

The centre gradually expanded its accommodation (taking over two more adjoining houses) and its staff to cater to the increasing number of Māori students at Otago – and the centre’s expanding role. The current staff comprises a manager, academic co-ordinator, mentoring and orientation co-ordinator, community liaison officer, two counsellors, administrator and receptionist, along with many tutors, mentors and other volunteers.

The Māori Centre describes itself as a “whānau on campus” or “home away from home” for students of Māori descent, from Orientation to graduation. Māori pre-graduation ceremonies have become a popular feature of Te Huka Mātauraka for Māori graduates and their families.

The centre manager, Pearl Matahiki, says that the specialist academic, cultural and social support the centre provides is particularly apt at Otago, given that two-thirds of its Māori students come from the North Island and can experience loneliness, homesickness and isolation.

The centre recorded more than 1,000 first-time visits in 2013, more than 4,000 academic enquiries and more than 6,000 attendances at various tutorials it organises for students in particular subjects.

Matahiki says that they have noted a correlation between centre use and academic success: the more tutorials students attend, the higher their marks. All 60 of the Māori students who gained entry to health professional programmes in 2013 had been involved with the centre’s various initiatives.

Te Tumu and the Māori Centre have both played significant roles in assisting the University to fulfil an important focus of its strategic direction: to increase Māori student participation and achievement.

Māori enrolments at Otago increased to an all-time high in 2014 of 1,776 students, who comprised a record 9.7 per cent of equivalent full-time domestic students.