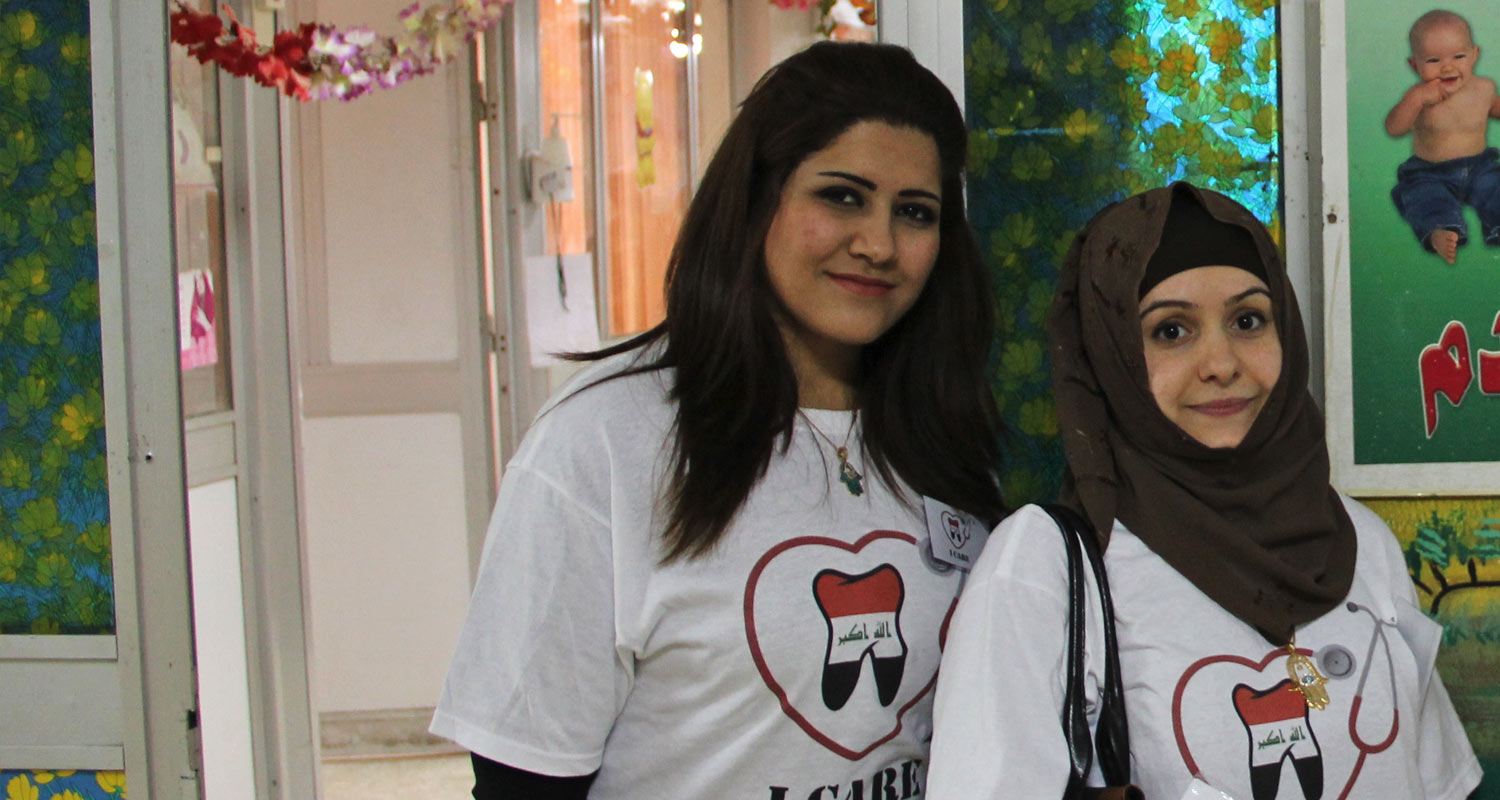 The plight of children in her native Iraq prompted Dr Assil Russell to establish the rapidly growing international aid organisation ICARE. Now she is also working closer to her New Zealand home with the Revive A Smile campaign.

While world leaders dither over how best to respond to the humanitarian crisis caused by political and religious turmoil in Iraq and Syria, an Otago graduate is quietly getting on with the job of providing aid to suffering children and families.

ICARE, a charity started in 2010 by Dr Assil Russell (above right) while she was a student dentist in Dunedin, has grown from helping with health problems to supplying food and shelter to displaced Iraqis in desperate need.

Her organisation has also gone global for fundraising and support, with hundreds of volunteers around the world and on the ground in Iraq.

It’s dangerous work, brought home recently when one of ICARE’s volunteers was killed by a car bomb in Baghdad. But it doesn’t stop Russell and others continuing to try to alleviate the plight of innocent people caught up in a war that, Russell says, has little to do with Islam.

“Anyone who knows anything about Islam will realise that calling the terrorists Islamic State (IS) is so wrong.

“The religion condemns all acts of violence and barbarism and puts great emphasis on the sanctity of human life. The Quran states that saving one person is equal to saving all of mankind and taking a life is equivalent to murdering all of mankind. Everything the Islamic State criminals are doing is completely un-Islamic.”

Russell was only five when her dentist father and doctor mother emigrated from Iraq to New Zealand to give their children a better life.

She grew up both Kiwi and Iraqi, fluent in both languages and with a strong Moslem faith. Her beliefs encapsulate the caring, giving side of Islam, and it wasn’t long before she was involving herself in community projects in her home town, Hamilton.

“My faith teaches that if you can help people less blessed, you should. My brother and I had been so privileged to grow up in New Zealand, and our parents raised us to understand just how lucky we were and instilled in us a strong sense of humanity.

“I’ve been socially aware ever since I can remember, and at high school I was involved in fundraising and youth organisations including the UN Waikato branch.”

After helping out in her father’s dental practice, Russell decided to follow his profession and enrolled at Otago.

“I wasn’t pushed by my parents. They said just follow your heart — but I always wanted to do something with health care, something hands on. I wanted to improve people’s lives and empower them. I love making people smile.

“At University I was asked to do an assignment comparing health-care systems in different countries. Naturally I chose New Zealand and Iraq – most of my family is still there – and during my research I was horrified at just how bad the health situation was and how extremely desperate the needs were.

“University enabled me to network and connect with people who shared my vision and goal of creating change in the world by caring for those less fortunate.”

In 2010, while still a student at Otago, Russell set up ICARE (Iraqi Children’s Aid and Repair Endeavour), a registered charity aiming to fund and provide life-changing health care for some of the children who were casualties of decades of fighting in Iraq.

Social media helped, says Russell. “It’s a great tool used in the right way and it enabled us to work from Dunedin, and now Hamilton.

“We use outlets like Facebook, YouTube, Instagram and Twitter to access all sorts of volunteers – students, builders, professionals, doctors, you name it – as we need them, and to organise work and keep people and donors up to date with where the money raised is being used and who we are helping and how. We try to show as true a picture as possible of what is happening in Iraq and it is not always what you see in the media.”

ICARE started out by identifying poor and orphaned Iraqi children in need of dental or medical care, raising funds to pay for it and then getting volunteers to see it through, from visiting medical professionals to local helpers.

By filming the children before and after treatment, Russell could show donors the results of their generosity. Unusually, there are no restrictions on who gets assistance.

“What makes ICARE unique is bringing help to people from all walks of life. We are not religion- or faith-based, and don’t question people about their beliefs or background. We just help those who need it.”

ICARE now has branches in Sydney, Melbourne and in the UK, and is starting up in the US and Canada. International branches are mainly involved with fundraising, but volunteers come from everywhere.

“We can’t cope with the number of people offering help. It’s overwhelming. It’s not just Iraqis, but all kinds of people who have been following what we are doing.”

The charity runs 24/7 on the ground in Iraq, where there are five branches and hundreds of volunteers help with distributing aid. And, with the emergence of IS, ICARE’s role has expanded dramatically from just health care.

“Lots of medical charities have expanded into humanitarian aid in response to the activities of IS. People are leaving their homes with nothing. They need food, shelter, bedding, clothing, heaters.

“It’s been suggested that there are more than five-and-a-half-million orphans and that more than a million people have been internally displaced, but I’m sure the figures will be much higher now. The amount of work that is needed is far greater than any charity in Iraq can cope with.”

It’s why volunteers keep turning up, despite constant danger. Aside from running the charity from New Zealand, Russell tries to get to Iraq once a year to help out and see family.

“Foreign aid workers are targeted in Iraq. It’s a very real risk for us. So we don’t announce what we are doing until we have done it. But every person who volunteers puts their life at risk every time they go outside. That was highlighted with the tragic loss of one of our people to a car bomb.

“This year [2014] has been the worst it has been for a very long time. The Iraqi people are generous, helpful and optimistic, but they’ve been waiting for things to get better for over 10 years.

“We make sure we publicise the work we are doing, because even small successes mean a lot. I speak daily with colleagues in Iraq and we try to keep each other positive.”

Running a charity in war-torn Iraq from the other side of the world sounds like work enough for anyone, but Russell also combines it with a busy Hamilton dental practice shared with her father, and has started a second charity effort closer to home.

After seeing how medical treatment could change the lives of Iraqi kids, Russell reckoned there were also people in Hamilton who could benefit from a little help. In 2012 she started Revive a Smile, offering dental treatment to locals with great need, but no resources.

“There are homeless people, refugees, people new to New Zealand, people whose lives are really hard. They haven’t got jobs and can’t afford dental care. It’s hard to get employment if you can’t even smile because your teeth are so bad. So we provide free clinics for those in need.”

Russell’s practice provides the expertise, with funding from the New Zealand Dental Association and the Wrigley Company Foundation, and support from Independent Dental Supplies and PAK’nSAVE, donating oral-care products to give to patients.

“The project has brought the community together and had positive results with some patients gaining employment after we revived their smiles. Now we’re expanding to include more needy Kiwis.”

In 2013 Russell was a finalist for New Zealander of the Year. In 2012 her work was nominated for the Sir Peter Blake Leadership Awards. She has given speeches in Parliament and Premier House and hopes to continue working and striving to create change both in New Zealand and Iraq.

How does she find time to fit everything in?

“You just have to make time. Once you start doing what you believe in the world seems to conspire to make it happen. Along the way there are always obstacles, but surrounding yourself with people who share your dream helps and things begin to take on a life of their own.

“Caring can create change. I’m just one of many people out there who care enough to make it happen.”