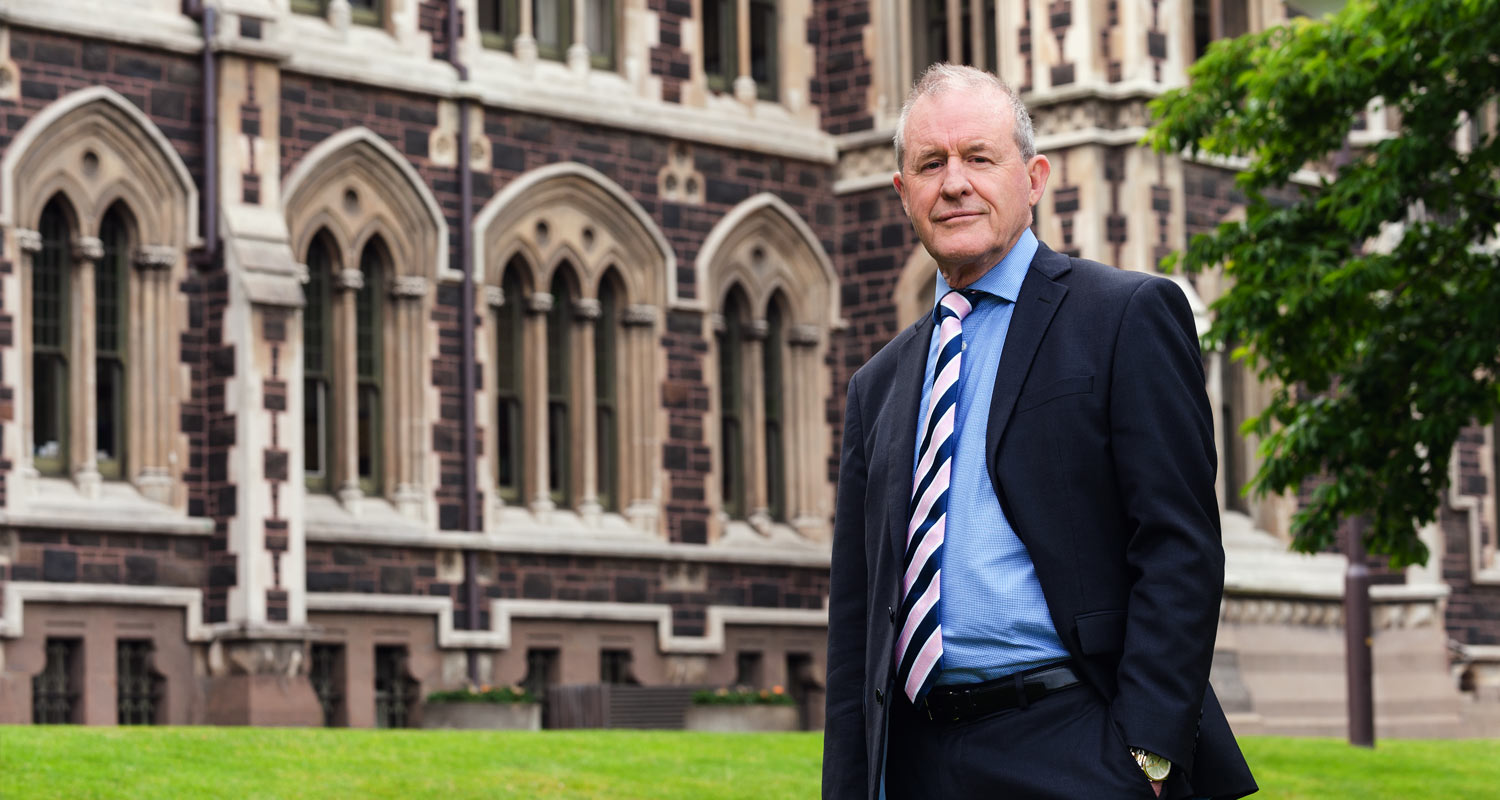 IVF pioneer Dr Richard Fisher talks about his years at the University of Otago and the events that led to his co-founding Fertility Associates, the company that transformed fertility treatment in this country.

Dr Richard Fisher’s consulting room at Fertility Associates, the company he co-founded, overlooks Auckland’s Mercy Ascot Hospital, of which he is chairman. For this reason, despite the fact it is more professionally smart than super plush, it evokes the notion of someone surveying his kingdom. He says he would rather refurbish one of the company’s clinics than purchase himself a new car, because it’s important to him that his patients and colleagues enjoy their environs. He is, it seems, a people person.

In 1987, the pair set up Fertility Associates, the country’s first private infertility medicine clinic and now its largest, with clinics in the five main centres, as well as one in Kuala Lumpur.

Fertility Associates has, effectively, led the field of reproductive medicine in New Zealand, achieving a number of “firsts” that include embryo freezing, egg freezing and sperm microinjection, as well as Australasia’s first baby to develop from a vitrified and thawed embryo.

Fisher is an honorary professor at the Liggins Institute, is frequently a commentator on fertility medicine issues and, in 2009, his services to medicine were recognised with the award of a Companion of the New Zealand Order of Merit.

All this is a far cry from the mayoralty of Hamilton to which the young Richard Fisher aspired as a keen Waikato boy, but no doubt a career that requires comparable levels of diplomacy. Perhaps it’s not surprising, then, that he maintains the most important skill for a doctor who practises what he calls “social” medicine rather than “transactional” medicine – the ability to communicate. That ability, he says, he learned from his mother, Anne.

Unusually for the era, Richard’s mother worked full-time and was the family breadwinner, as his father had sustained a war injury that prevented him from working consistently. So, in 1947, Anne became a journalist, first in radio and then with the Waikato Times.

Afternoons spent doing homework in the newsroom introduced schoolboy Richard Fisher to the debate of local issues and the importance of good communication – both things that would stand him in good stead in his later stint in student politics and, subsequent, career in “social” medicine. It is also evident Fisher’s mother was a strong woman who helped to shape an empathy for women that informs his work today.

“The powerful people in my family have always been women, so I think that means my relationships with women have always been different. I understand the issues of feminism, but they were never part of my day-to-day life because I always assumed it was normal for your mother to be out working and be the boss.”

Fisher went to Kings College as a boarder before – under instructions from his mother – heading to the University of Otago to study medicine. Here he was not an A student, but an A+ participant in the experiences that campus life and three years as a resident of Selwyn College could offer. He learned to play billiards, read the complete works of John Steinbeck and became vice-president of the Otago University Students’ Association. But he failed to gain entry to Medical School at the first attempt, only succeeding the second time around.

Even after that there were several “chats” with the Medical School Clinical Dean, Dr Robin Irvine, who apparently suggested that if it was ok for the All Blacks to have time off occasionally it was probably alright for student politicians.

‘The funny thing is,” Fisher recalls, “the student union meetings were always at lunchtime, but lunchtime was the time when we had lectures in genetics and embryology. So I’d never get to them, yet they’re the two things I do now.”

Fisher credits his entry into obstetrics and gynaecology, that led to his later specialisation in reproductive medicine, to an impromptu stint as an O & G registrar at Waikato Hospital.

“I was originally going to go into general practice, so I was doing a Diploma in Obstetrics, but the day I started the registrar at Waikato Hospital resigned and left. So the consultants looked at me and said ‘you’re going to be the registrar’.”

Fisher claims to have benefited from the best – if unconventional by today’s standards – preparation as a result. By the time he arrived at National Women’s Hospital in Auckland at the end of the following year he had already performed more than 200 Caesarean sections.

Specialist training in England followed where he learned of the development of IVF by Drs Robert Edwards and Patrick Steptoe. On his return to New Zealand he met up again with colleague Dr Graham, whom he had known earlier at National Women’s Hospital.

“Infertility medicine was pretty limited at the time to a little bit of surgery and a few drugs. IVF revolutionised the field because it was something you could do for a whole lot of people for whom previously you couldn’t do anything, even though the results were extraordinarily poor at that stage. If you had a five per cent success rate everyone thought you were triumphant, because it was five per cent better than anyone had had before.”

“When I talk to patients now and say you have a 40 to 50 per cent chance of becoming pregnant they look at me as if to say, ‘that’s not very much’ – and they’re right. We’re constrained by biology so we’re probably not going to get much better than that, but that’s so much better than where we started.”

Famously Fisher and Graham started up New Zealand’s first infertility clinic “by subterfuge”, beneath the Auckland Health Board’s radar. The service was later sanctioned, but struggled for adequate funding in the face of ballooning demand.

“Things like the donor insemination service were pretty transactional,” recalls Fisher. “Someone would come in and say they wanted a baby and you would say ‘we’ll find you some sperm’ and the person got inseminated and went away.

Reproductive medicine occupies one of the pointy ends of medical ethics. It’s an area Fisher is constantly quizzed on.

“Ethics and ethical questions are embedded in our work. Not a day goes by without a new question or debate coming up. Here at Fertility Associates we end up with a consensus view and we’ll live with that, but generally we’re conservative ethically and we’ll err on the side of spending more time on discussion.”

Perhaps because of his emphasis on the importance of communication, Fisher has become something of a commentator on such issues, but he doesn’t rate himself as “smart”. Rather, as a principal of Fertility Associates, where scientific staff engage one day a week in research, and also at the Liggins Institute Trust, he sees it as his job to be something of a patron to the “smart” people who do medical research.

For those who practise medicine, Fisher believes the most important skills are the ability to think and communicate.

“If you’re going to be a surgeon you have to have good technical skills, but the important thing about surgery is you also have to know when to do it. That requires thought processes. If I was interviewing [potential students] for medical school – which I’m not – I’d be looking for someone who can think and communicate.”

Fisher retains links to his alma mater through the Reproductive Medicine Unit at Dunedin Hospital, where Fertility Associates has supervised science for many years, and through his children – two of whom have Otago degrees.

There’s also a Frances Hodgkins work on paper hanging in the Clocktower building which he, in his capacity as 1969 OUSA vice-president, helped purchase as a centennial gift to the University from its student cohort. It’s fitting, perhaps, given his subsequent career, that the work is from one of the most prominent women artists New Zealand has produced.

“Ralph Hotere was Frances Hodgkins Fellow at the time and he was painting all these works that were black. I just thought a bit of colour would be nice.”