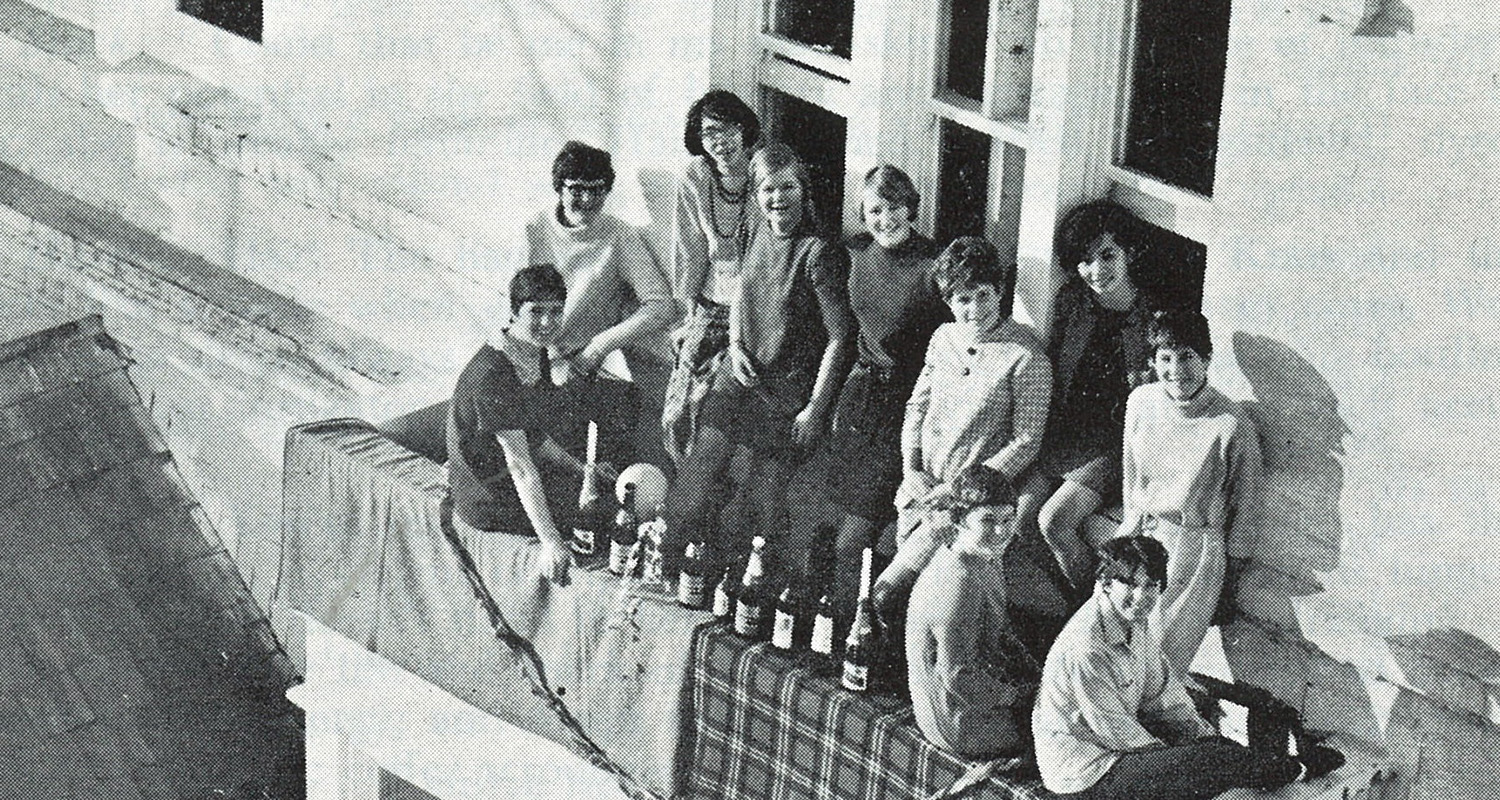 Established a century ago to provide supervised accommodation for the University’s unmarried home science students, Studholme College has much to celebrate.

The history of Studholme College is firmly entwined with that of the discipline of home science at Otago. The college was established in 1915 to accommodate the burgeoning number of young women who came from all over New Zealand to study the subject that had been established – with remarkable foresight – in 1911.

Two years before then Colonel John Studholme, a farmer from Canterbury, had proposed a school of home science at the University. Oxford-educated, Studholme had witnessed first-hand the success of degree-level university programmes in domestic science in America. Deeply interested in social progress, he recognised a need in his home country for similar educational opportunities for women and offered the University a three-year, annual donation of £200 to fund the establishment of a Chair.

The success of the programme – which grew from five students in 1911 to 32 full-time degree or diploma students and three part-timers in 1915 – compelled the University to provide supervised accommodation for the young unmarried women who attended. So, with government assistance and local fundraising efforts, the University purchased two adjoining houses on the corner of Leith and Union Streets, where Unicol stands today. These were converted into the country’s first home science hostel and duly named Studholme House in remembrance of the school’s founding patron.

Colonel Studholme’s initiative, however, had proven such a resounding success that student demand for places continued to climb. In 1926 the Clyde Street residence of Sir James Allen, Arana (a transliteration into Māori of the name Allen), former University Vice-Chancellor and Chancellor, was rented for a year to provide “overflow” accommodation.

In 1928 the decision was made to purchase a large house at 127 Clyde Street that had been built in the 1890s for the family of prominent accountant William Brown. This was finally purchased for £8,901 and opened in 1930. This new hostel was named Upper Studholme House and the original hostel renamed Lower Studholme House. This building remains as the West Wing in Studholme College today.

Dawn Ibbotson (née Smith) remembers sharing a room in Upper Studholme with four other young women in 1933. “I still marvel that we managed,” she says. “We slept and worked in that room, did all our swotting together in that one room.”

Life at Studholme back then – and subsequently through the decades – was a different experience to the one enjoyed by 21st century residents. For a start, it was also a teaching facility where home science students learned cookery, housekeeping, laundry and other practical skills taught in the home science programme. Meal planning and preparation for residents and staff formed a major part of the curriculum.

“It was always a struggle to complete the work in the kitchen and arrive on time for a 2pm lecture,” recalls Valmai Hedley (née Griffith), a resident from 1945 to 1947.

In the 1930s and 1940s more houses – St Helen’s, St Anne’s and Dunlop House (the first two being former hospitals) – were incorporated into the Studholme stable to cater for still burgeoning demand for home science places. It was not an ideal situation, with students having to walk to Lower Studholme for meals and maintenance on the ageing buildings proving a costly drain.

“St Helen’s and St Anne’s were too old and expensive to maintain,” the dean and warden from 1961 to 1986, Professor Patricia Coleman, would later say. “They were not, of course, too expensive to heat because we didn’t have any heating.”

When the ceiling in the original Studholme House partially collapsed in 1951 it was deemed unsafe for residency, although the kitchen and dining facilities continued to be used until they were replaced by new, more modern facilities at the Upper Studholme site in 1959.

In the same year, after two decades of tireless fundraising by fearless faculty deans and an active alumni association, construction began on the large building – since named the Gregory Wing after Professor Elizabeth Gregory, the dean and warden from 1941 to 1961 – that forms the major block in Studholme today. It was opened in 1961 to national headlines, for its association with the School of Home Science, and the good work many of its graduates went on to achieve meant its establishment was perceived as very much in the national interest.

With subsequent modifications to this and the addition of several adjacent houses, the Gregory block enables the college to provide for 184 residents in single study bedrooms, fully catered, heated and with no dishes to do – what would the early Studholmites think of such luxury? 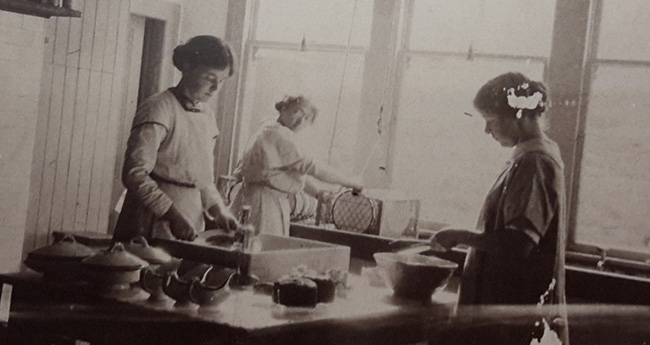 Refining their practical cookery skills in the original kitchen of Studholme House, circa 1920, are Aileen Anderson, Betty Cornish and Phyllis Stephens.

Give a girl a curfew and she’ll probably try to get around it, even in the early days of Studholme when personal freedoms were highly regulated.

“We had a late leave book, which had to be signed with the time you came in,” recalls Dawn Ibbotson (née Smith), resident from 1933 to 1936. “Sometimes you put your clock back, but the sub-warden was fairly quick off the mark and she used to have us up, saying she thought we’d not been truthful with our signing in.”

The many sash-style windows in the older Studholme residences proved helpful for getting around such discipline as lock out – as well as facilitating the surreptitious departure of “illegal” visitors. Ibbotson remembers one night it snowed around midnight. “The next morning there were very tell-tale footprints outside a window heading to the gate.”

Later on – and to then-warden Mrs Mary Dunn’s horror – these same architectural features assisted “raiding parties” from other colleges to enter Studholme and wreak havoc. In September 1966 a group of Aquinas students entered “illegally” by climbing through various windows, including one in the warden’s own living quarters. The event sparked intervention from the Registrar.

The appeal of raiding the “Virgin’s Retreat” – as Studholme had come to be known – was somewhat diminished in 1974, when male residents were admitted. From then on residents were provided with a key to the front door and restrictions on leave were loosened.

“Very few problems have been encountered since the institution of this system, and it has eliminated the inevitable requests for extended hours which have previously formed part of many a hostel meeting,” wrote student president Kathryn Barnett at the end of the year.

In 2015 those leaving overnight or for a weekend are still required to sign out and provide information about their destination.

Dress standards at Studholme have moved from regulated to relaxed over the course of a century. In the 1960s hair curlers were only permitted in the dining room on Saturdays – and then they were to be covered by a scarf. “Slacks” could be worn there on Saturdays and at Sunday breakfast. In 1968 residents got permission to extend this to week-time – but only in the winter term. This was changed in September 1971 when sufficient disquiet was expressed.

Slippers were another regulated item. In the 1920s and 1930s they were favoured for being quieter on all the hard floor surfaces – but never in the dining room. Finally, at the end of 1975, it was agreed that slippers could be worn to breakfast. Just two years later, it was moved that slippers be allowed at all meals except Sunday lunch.

A 100th birthday deserves a celebration. With that in mind, Studholme College is celebrating its centenary with a Studholme reunion weekend from 27–29 November 2015.

Former residents and staff members are invited to revisit their old stamping ground, share their Studholme experiences and participate in a programme of activities and tours. A commissioned carving/artwork on the grounds of Studholme will also be unveiled to mark the occasion.

The college is also preparing a centennial publication to mark the milestone. Studholme: A Century of Life and Learning captures the major events of the college’s history – and many of the minor ones too. From beauty contests to dinner balls, it collects 100 years of Studholme experiences together in one illustrated volume.

“Studholme was shaped by some remarkable characters,“ says writer Rebecca Tansley, “and helped shape the character of everyone who has lived there. This book is also about some those stories as well as a history of the college itself.”

For more information about the Studholme College centenary visit: otago.ac/nz/studholme/centenary

Banner photo: A group of young women on top of the first floor windows in the West Wing, 1968. (courtesy Sally Keeling)