Otago scientists are exploring the use of pulsed electric field processing to help winemakers improve the quality and quantity of their wine – and perhaps even reduce the need for additives. 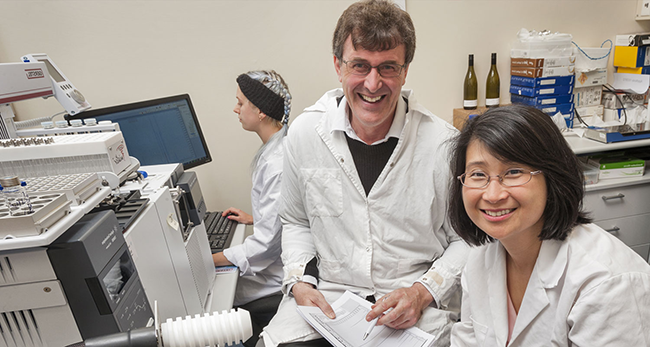 University of Otago scientists are subjecting grapes to shocking treatment, but it is all in the interests of faster, better wine.

Oey explains that, after the grapes are crushed, they are passed through a machine that gives them a short electric pulse, which affects the structure and permeability of the plant cells.

The technology has been used in winemaking overseas, notably in France and Germany, but this is the first time that it has been applied to New Zealand’s unique winemaking conditions.

“We are interested in giving wine producers access to a new technology which may enable them to tailor their wines towards more efficient production, better quality and, potentially in some cases, maybe even enable them to use fewer additives like sulphur dioxide,” Burritt explains.

Oey says that, for red wine, the time it takes for the desired colour, flavour, sensory and other molecules to be released from the grapes can be shortened – in the case of pinot noir and merlot, from up to a couple of weeks, to as little as two or three days. With white wine, the timeframes are much shorter.

They say that the process not only shortens the time it takes to make wine but, for some varieties, it also increases the quantity of wine because it results in more efficient extraction of juice from the grapes. It also increases the quality of the wine, partly because there is less time for molecules to be released that have negative effects on wine quality.

As a result, winemakers in a bad growing year might be able to produce the same amount and standard of wine that they would produce in a good year.

While the process uses very little energy, Oey says that there are significant energy savings as the grapes need to be kept at a controlled temperature for a much shorter period.

As for fewer additives, Burritt says that white wine – which contains fewer natural preservatives than red wine – currently has sulphur dioxide added as a preservative and an antioxidant to prevent the wine from going off, but this is a potential barrier to wine exports, particularly to Europe.

“We are investigating pulsed electric field treatment as a way of releasing other metabolites from the grapes that may act as antioxidants and may have some preservative effects as well.

“If we can use the technology to minimise the chemicals added to our wine, or increase the value of our wine so that the winegrowers get an improved financial return for the same area of planting, that is good for New Zealand’s economy and the natural environment,” Burritt says.

They are factoring into their research the need for the vine management strategies viticulturists currently employ, such as the expensive practice of removing leaves from vines to control the amount of light the berries receive.

Oey and Burritt are quick to assure winemaking traditionalists that, in using pulsed electric field processing, they are simply speeding up and improving a natural process; and to assure consumers that the technology is not merely harmless, but potentially beneficial.

The research is partly a collaboration with Lincoln University: the grapes are grown at Lincoln’s research vineyard, the processing and testing of the berries is done at Otago, and the wine is produced back at Lincoln.

The researchers are planning to replace a small processing machine at Otago with a large transportable machine, imported from Germany, which will be used to undertake pilot trials on different grapes and growing conditions at vineyards throughout New Zealand.

The industry-focused research is being funded by Otago and Lincoln universities; the Ministry of Business, Innovation and Employment; and the Cresswell Jackson New Zealand Wine Trust, with support from New Zealand winegrowers.

The researchers are progressively publishing the research results as they go. Articles have already appeared in the Food and Bioprocess Technology and Food Chemistry journals.

The wine research is part of wider collaborative work by Oey and Burritt on the benefits of pulsed electric field processing technology applied to food. Their endeavours to date have included research on meat, potatoes and carrots, with planned research on kiwifruit and cherries.

And while Oey enjoys an occasional glass of wine, the non-alcohol consuming Burritt has a purely professional interest in the subject.