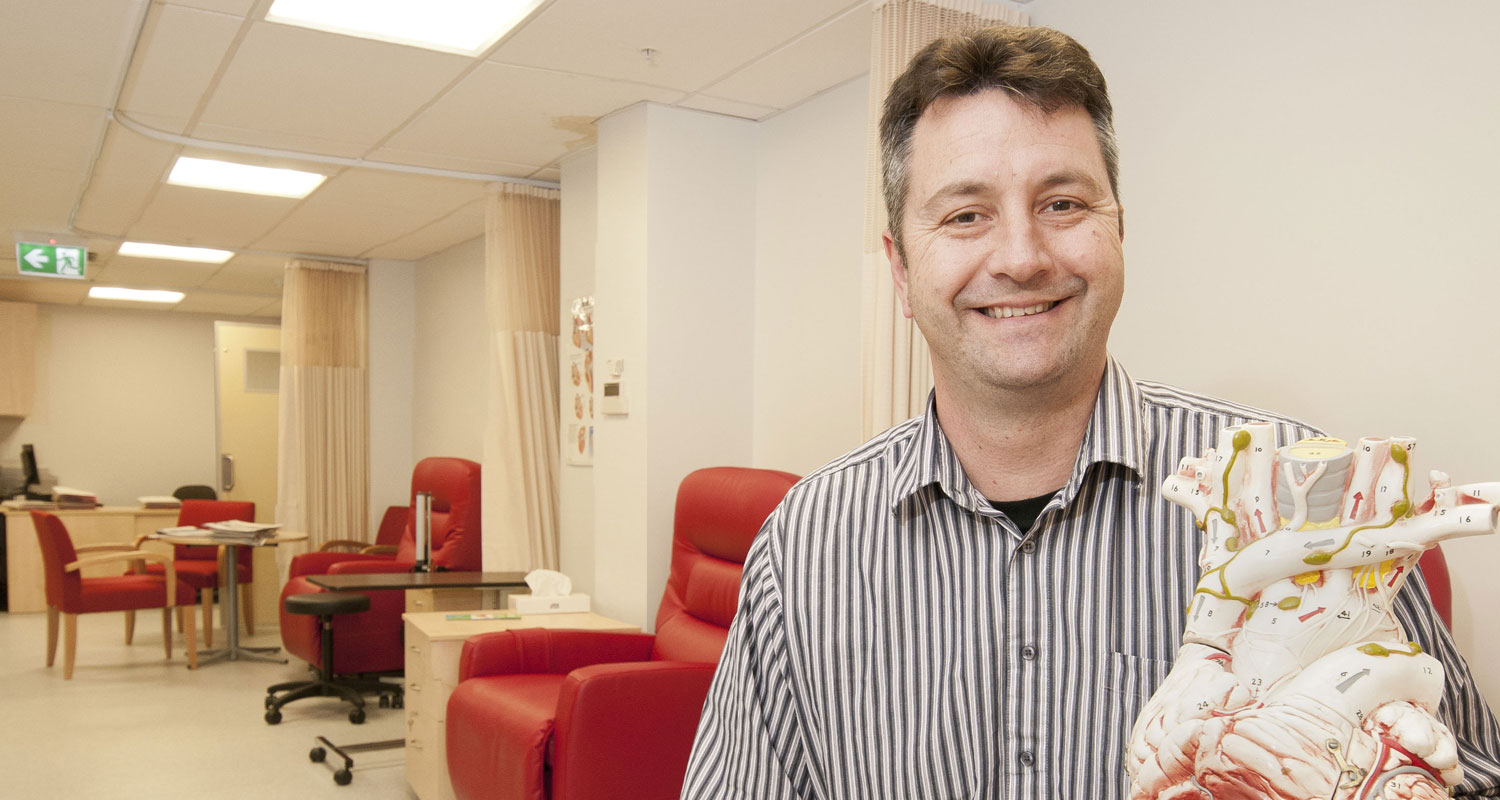 Upstream Medical Technologies (UMT), a new partnership between the University of Otago and venture capitalists Powerhouse Ventures Ltd, was launched late last year. It is one of the largest – and most complex – projects the University’s commercialisation arm, Otago Innovation Ltd, has had involvement with, to date.

The new company’s aim is to revolutionise the accurate and timely diagnosis of heart conditions – in particular, unstable angina – by commercialising technology being developed by the internationally recognised Christchurch Heart Institute research team, led by Professor Mark Richards and Associate Professor Chris Pemberton.

UMT is the result of more than seven years’ work by Otago Innovation, a venture senior commercialisation manager David Christensen says was made possible by a combination of commercial opportunity, and the outstanding reputation and enthusiasm of the research team.

“Chris’s commitment, in particular, has been a key to the programme’s success, helping us to get to the point where we were able to engage with Powerhouse.”

The deal has involved seven patent families which have already been sought, or are about to seek, protection in multiple places including Australia, Canada, China, Europe, India, Japan, New Zealand and the United States.

“Our investment will fund further refinements of the tests being developed by the research team, as well as the larger clinical trials necessary in developing the product.”

The global market for unstable angina diagnostics alone is estimated at more than $US1 billion.

Lurking inside the arteries of thousands of New Zealanders is unstable heart plaque. Slowly building up on artery walls, it can break away, block blood flow and cause heart attacks.

Many people with unstable angina visit an emergency department with chest pain or a shortness of breath in the months before their heart attack. But, with no easy way to diagnose the condition, they are usually subjected to a barrage of tests over several days to get a diagnosis, or discharged with no definitive diagnosis.

However, patients may be far better off in future thanks to the work of Associate Professor Chris Pemberton and his team from the University of Otago, Christchurch. They are developing a test to quickly and easily detect unstable angina by measuring levels of the hormone BNP signal peptide in a patient’s blood.

This groundbreaking test is one of a number under development by the Christchurch researchers for the newly formed company Upstream Medical Technologies (UMT).

The research team – led by Pemberton and Professor Mark Richards of the Christchurch Heart Institute – has been at the forefront of global research into heart disease diagnostics for more than 30 years.

In the mid-1980s they were first to prove how a particular heart hormone affected the human, including its actions on the heart, kidneys and circulation. A decade later the Christchurch researchers were first to show that BNP could be used to diagnose heart failure. In 1996, they cemented their place as cardiac research leaders with the discovery of peptide NT-proBNP and a subsequent treatment strategy based on serial measurement of the hormone’s levels in patients’ blood. This strategy is now used in hospitals around the globe.

Pemberton says the Christchurch group has an international reputation as being among the best at measuring substances in the blood related to heart disease and kidney function. This makes them ideally placed to develop new tests for use in hospitals worldwide.

“There are many clinical grey areas where new tests could make a huge difference in emergency departments or cardiology wards.”

One obvious area of unmet clinical need is a test for unstable angina. Currently, there is no test in use that can diagnose the condition, Pemberton says.
A recent American Medical Journal article found that less than five per cent of unstable angina cases were picked up by stress tests (a common diagnostic tool). Pemberton says the condition usually comes to a doctor’s attention when the patient has a heart attack.

“A test that identifies unstable angina could be really crucial as it would allow clinicians to quickly identify those who need drug treatment or a stent inserted.’’

A test could also be commercially profitable as heart disease is a huge – and still growing – problem internationally. According to Heart Foundation figures, more than 12,000 New Zealanders are discharged every year from hospital for heart attacks and almost 2500 people die from heart attack annually.

Pemberton says his team has conducted small research studies on their unstable angina test. The early results are promising. They now need to conduct multinational clinical trials of up to 5000 people to produce the robust evidence required by bodies such as America’s Food and Drug Administration before it can be used in hospitals.

The team is developing another test to detect those with heart failure and pneumonia. To have both conditions is common among the elderly, but they “superimpose” each other on chest x-rays making diagnosis difficult. Patients can wait up to two days before a laboratory sample confirms they have pneumonia, during which time their condition could deteriorate without correct medication, Pemberton says.

While Pemberton is enthusiastic about this and a range of other tests under development, it will be years – and several million dollars in research and development – before any get to market.

“It’s a long but very exciting journey that we are on. Our ultimate aim is to invent tests that are game changers and save lives and time by fast, easy diagnosis.”