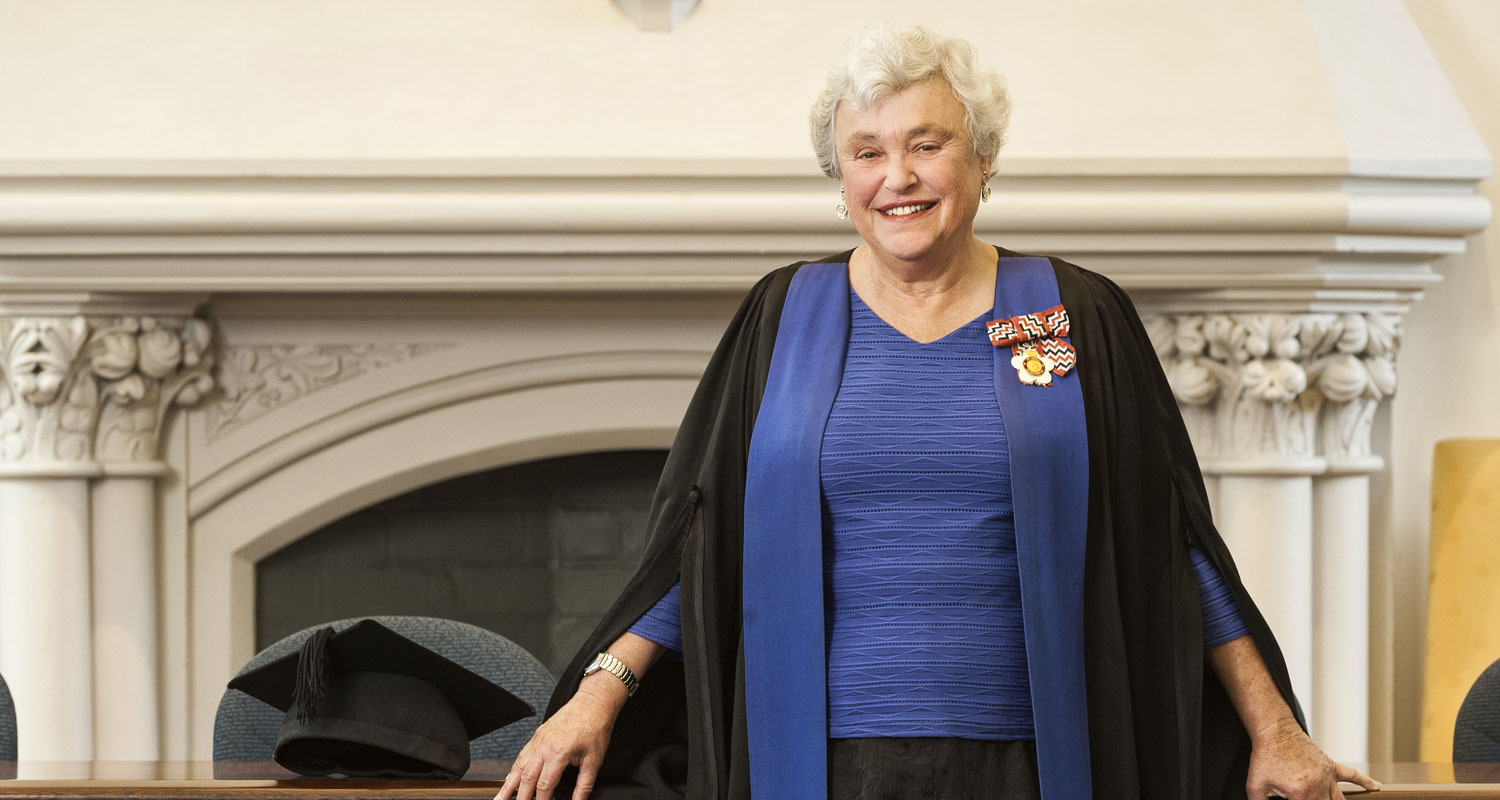 Long-serving former University of Otago Council member, Lorraine Isaacs, started as a student at Otago in 1964 and feels as though she never left.

For the past four decades – and more – Lorraine Isaacs has been living parallel lives, as a staunch member of the University of Otago community and New Zealand television.

The Isaacs family emigrated from South Africa to New Zealand in 1955, when Lorraine was eight. After fleeing generations of persecution in Russia, the Jewish family was especially averse to the apartheid policies being implemented in South Africa; her father was a veterinarian and New Zealand was desperately short of vets.

The family settled in Invercargill, but moved to Dunedin when Isaacs was about to turn 17. Rather than enrol her in what would have been her 10th school, her parents decided that she would go straight to the University of Otago, where she studied English, French, Russian and history.

Isaacs’ claims to student fame occurred when she was the women’s representative on the Otago University Students’ Association executive.

She was among about 1000 students who took part in an overnight “live-in” in the Student Union building in 1967, in protest against what was effectively a ban by the University on mixed-sex flatting.

Isaacs was at the centre of a further protest that year, against an alternative student publication, Falus. She argued at an OUSA forum in the Student Union that the broadsheet – a copy of which she clenched in her hand – was disgusting, lacked literary merit and should be banned.

“I dramatically said how terrible it was, lit a match, set fire to it, threw it into the rubbish bin and stalked out of the room,” Isaacs recalls. “The rubbish in the bin caught fire and students rushed to put it out, which messed up my whole dramatic exit.”

Isaacs completed a Master of Arts degree in English at Otago, a teaching diploma at the Secondary Teachers’ Training College in Christchurch, and another master’s degree – this time in American literature – at the University of Hawai’i, while on an American Federal Government East West Center Scholarship.

On her return to Dunedin in 1971, a serendipitous conversation with a neighbour led to what was to become a long and fruitful television career.

“I had registered to become a secondary school teacher, but the man who lived across the road from my parents came over and said, ‘We are desperately short of somebody to research news for DNTV2 because our researcher is having a baby, but she is promising to come back in six weeks’ time.’ I enjoyed the work and she never came back.”

After working on the Dunedin regional news programme, The South Tonight, for a couple of years, Isaacs went on her “OE”, working as a trade officer with the New Zealand High Commission in London for three years. Back home in Dunedin, she again applied to go teaching.

“I walked round the corner from the Department of Education to the television studios: there was Michael Stedman, he looked up, didn’t even say ‘Hello’, even though I had been away for three years. He simply said, ‘Good, can you start at 8.30 tomorrow morning?’”

Her subsequent television CV as a researcher, director and producer in Dunedin and Wellington spans a nostalgic feast of New Zealand television, including children’s programmes Spot On and Play School, panel “agony aunts” show Beauty and the Beast, and highbrow quiz show University Challenge. She also helped to produce fundraising Telethons and became the first female television manager in New Zealand.

Since 1993, Isaacs has worked as a freelance television researcher, director and producer for various Dunedin production companies, and managed or mentored regional television stations in Dunedin and Invercargill.

Throughout this time, however, Isaacs has maintained her strong University connections.

She joined the New Zealand Federation of University (now Graduate) Women in 1976, a 40-year involvement that includes three years as national president. Her local efforts include helping with the rental of academic dress for graduation ceremonies – an activity, she says, which earns about $100,000 a year, funding scholarships for women in New Zealand and overseas.

In 1999 she became a member of the University Council, as one of three members elected by the graduates. She recalls that the previous times she had been in the Council Chamber – where University Council meetings are held – she was a student and it was the Library.

She has also served on a host of other university committees, panels and boards, from the Fundraising Committee and the Development Society Committee, to the Cumberland College Council, the University of Otago Foundation Trust board of trustees, and a panel that selects OUSA Golds Awards’ recipients.

Isaacs should have ceased to be a University Council member in 2014, on completion of the prescribed maximum of 16 years, but stayed on for another year until legislative changes reducing the size of councils took effect at the start of 2016. She is continuing as the lay convenor of two Council sub-committees: Human Ethics, and Human Ethics (Health).

Her explanation for her 17 years’ service on the Council is simple.

“You do it because you love the University. And I think that it is an incredibly important job, because the world desperately needs educated people and the University is one of the places where people can get educated, not just in specific vocational areas, but educated to think and to use their intellectual ability.”

Isaacs reflects that she has witnessed huge changes at the University since she was a student more than five decades ago.

She notes that there has also been a substantial increase in the number of international students and in the range of subjects, although a few subjects – such as Icelandic and Gothic languages – have disappeared.

Astonishingly, Isaacs has not had a television set at home since Television New Zealand took back her work-supplied set when she finished as the TVNZ manager in Dunedin in 1990. “Television for me is about making programmes, not watching them.”

She instead devours books. She still uses a fax machine and only recently acquired a computer, for work related to University Challenge.

Isaacs’ services to television, education and women were recognised in 2010 with a Queens Service Order.

Away from the University and television, the 69-year-old spends a month for two out of every three northern summers as an international volunteer working on archaeological sites in Israel.