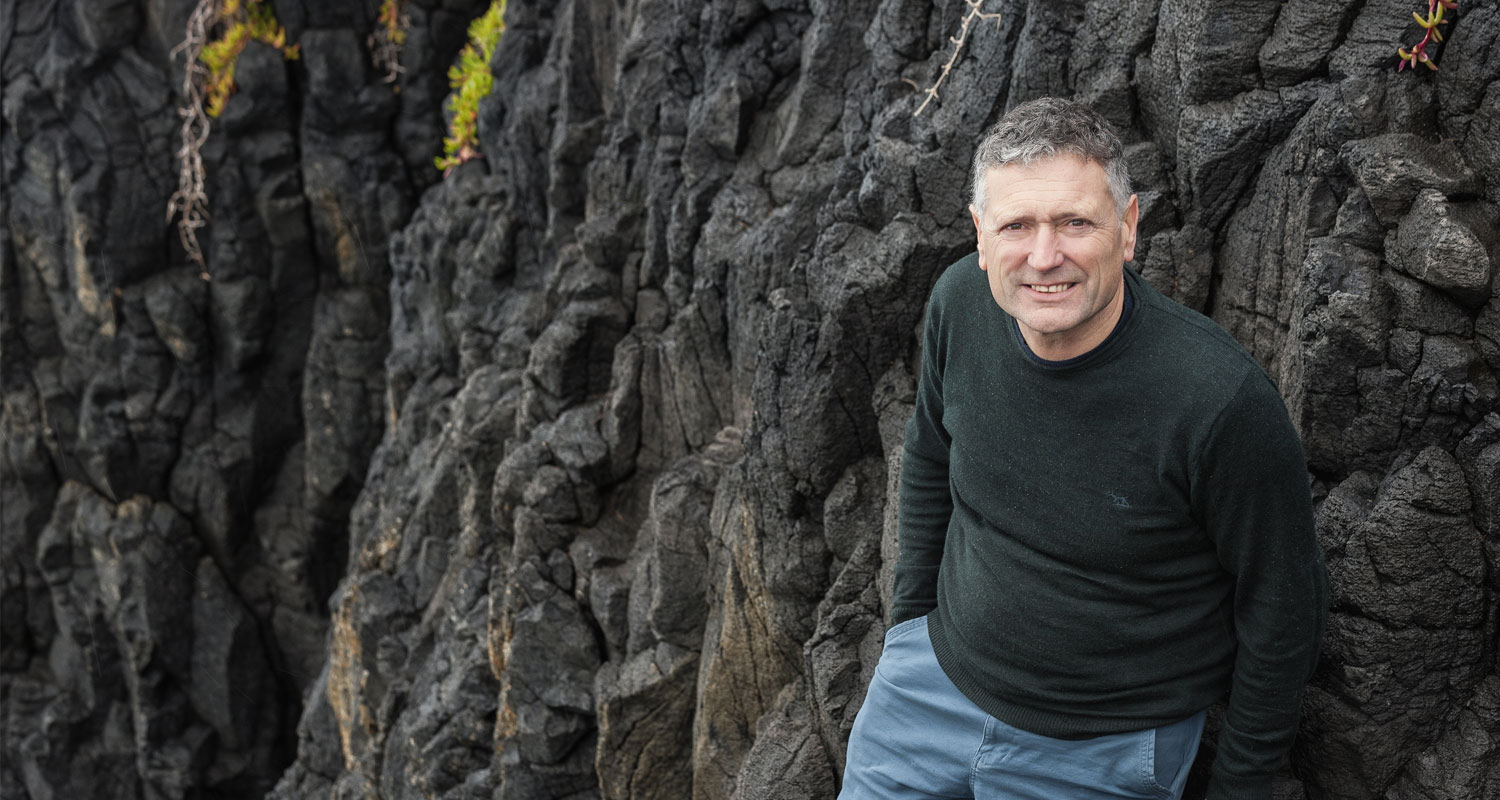 Are there hidden seismic sources underneath Dunedin? This is one of the areas of investigation being undertaken by Otago’s inaugural Professor of Earthquake Science, Mark Stirling, who a leads multidisciplinary collaboration examining fault structures, earthquake processes and their hazards.

The devastating earthquakes that rocked Christchurch in 2010 and 2011 held the world’s attention long after the shocks abated.

Now Professor Mark Stirling is hoping that the next time New Zealand earthquakes make global headlines, it will be to focus not on disaster, but on science.

As Otago’s inaugural Professor of Earthquake Science, Stirling heads a new multidisciplinary collaboration that aims to advance fundamental understanding of the relationships between fault structure, earthquake processes and consequential hazards.

The group draws on Otago’s considerable research expertise from departments including Geology, Geography, Marine Science, Mathematics and Statistics, and Surveying, and will also be collaborating nationally and internationally.

Stirling, who was previously a principal scientist in seismic hazard analysis at GNS Science, is based at the University’s Department of Geology, which has undertaken decades of world-leading investigations into crustal structure and fault zone mechanics.

Funding to establish the new Chair came from organisations and individuals, including a substantial Alumni Annual Appeal. “Most of it came from generous donations from alumni,” says Stirling. “And, although the Chair position is now established, more money still needs to be raised to have it fully funded.”*

The group has already attracted funding from a number of organisations, including the Natural Hazards Research Platform, EQC, Southern California Earthquake Centre (SCEC) and QuakeCoRE, the latter recently set up by the government to build on existing research programmes to improve New Zealand’s resilience to earthquake events.

“The fact that QuakeCoRE wants Otago as part of their team shows that we are already on the map,” says Stirling.

“Otago is known as having well established aspects of earthquake science. The University has a reputation for doing wide-ranging work in seismology and faulting. I want to build on that and build Otago’s national and international reputation.

“I want to create a critical mass of students and collaborators inside and outside the University to establish a worldwide reputation in earthquake science."

“We’re harnessing the resources of research from across the University and working with others in New Zealand such as Massey University, where we’re applying the principles of earthquake hazards to volcanic hazards.”

Stirling’s connections come from a long and varied career.

He did a double major in Geography and Geology at Otago, inspired by early travel around New Zealand with his parents.

“I was exposed to places like the West Coast. At school I was interested in tramping and the outdoors — more than just being in the mountains, but also how they formed. I asked questions and got interested.

“Initially I had three ideas for a career — science, art or becoming a pilot. The earth sciences idea meant that if I did science I would be able to understand the environment I was in — and I could get paid for going into the mountains.”

After his BSc, Stirling spent two years getting paid by the Department of Lands and Survey to work on geomorphology in the Central Otago mountains, which led him to return to study for an MSc (Hons) in Geology, researching the Central Otago landforms and the tectonic movements that formed them.

“After that I had a brief stint in the New Zealand Geological Survey, and then spent five years consulting, doing a lot of hazard-related work, including trenching on active faults. A lot of what I did was practical, but I kept being interested in the science of what I was doing and found myself writing up papers after work.”

The combination of work experience and academic record gained Stirling an invitation to do a PhD at the University of Nevada, Reno, looking at seismic hazard assessment.

“I wanted to broaden my knowledge and get the credentials that would allow me to move into a practical research career. I expanded my skill set to include seismology and seismic hazard, and in the process really learned how to write papers and express myself scientifically. It was great experience for me.”

The year he graduated he joined the Institute of Geological Sciences, which later became GNS Science.

“They needed someone to work on seismic hazards for New Zealand in the late 1990s because the maps we had were from the 1980s and well out of date. I worked on combining geological data and seismic data and understanding it.”

Throughout his time at GNS Science he used a multidisciplinary approach that crossed boundaries of fundamental data collection, modelling and providing practical solutions for end users, and continued to publish his findings.

He strongly recommends the mix of industry and academia. “Once students have done a major block of study they should spend some time in the workplace. Have a spell and get some work experience because it gives you an appreciation of real-world interests and needs, and it can shape your future.

“Some say that if you are planning to end up in an academic career you should choose your subjects early and get in as quickly as you can because it can be hard to get into academia later in a career. But that isn’t always the case in progressive universities like Otago.”

Stirling’s appointment is evidence. “When I saw the position described in the Otago Magazine [issue 34, October 2012] I thought no mortal soul on this planet could satisfy all those criteria. But after I attended a symposium at Otago it was suggested that I should apply because it was important for earthquake science to be in touch with the end users.

“While it’s quite challenging to be Chair of Earthquake Science, I think the University was very progressive choosing someone with my kind of background.”

Teaching skills appeared to come naturally. “I did auditions during my three-day interview process. Fortunately I'd given a lot of talks over the years. You learn to reach out to an intelligent lay audience, which is what students are, and it went well.”

“We're addressing major points on the earthquake science spectrum. I'm using a collaborative approach and reaching out to colleagues in departments like Geology, and Maths and Statistics, and pulling in bright students and postdocs to do some of the hard work in a number of areas.”

Current projects involving students include interpreting prehistoric earthquakes by doing geological studies on trenches dug across fault lines near Dunedin; seismic ground model simulations of the Dunstan Fault near the Clyde Dam; studying ancient fragile rock tors to see what they can tell us about what did not happen in earthquake prehistory; and looking at the potential for hidden seismic sources to exist under Dunedin.

“Otago is a wonderful laboratory for studying earthquake behaviour on a long time scale. We want to study the characteristics of the 13 major fault-lines that lie within 100 kilometres of Dunedin."

“Faults don’t always behave in a regular way. They can switch on and off, so we’re investigating how this behaviour works through time. The Akatore Fault is a local fault that appears to show this behaviour, based on our recent paleoseismic results.

“In the future we want to work in Southland and South Westland, and study what happens at the interaction between the Alpine Fault and the subduction zone under Fiordland.

“We're starting small, but developing capability and building it up progressively, taking on large — but manageably large — projects.”

Stirling is still getting his own hands dirty, supervising students in the field and maintaining his international connections with earthquake hazard assessment for nuclear power plants and dams.

“Earthquake science is a very interesting field. I’d encourage any students attracted by it to look out for 200- and 300-level classes and consider enrolling. It’s very relevant to today’s world and you’ll certainly get a job out of it, especially if you want to travel overseas.”

Stirling believes the Chair of Earthquake Science is the highlight of his career. “I enjoyed my time with GNS Science and learned a great deal from a wonderful group of scientists. However, this was an opportunity I couldn’t miss. I’m here for the duration.”

Thinking back to his schoolboy wish list of possible careers of science, art or becoming a pilot, science gets a big tick. Art gets one too, as Stirling founded the New Zealand arts festival Kiwiburn, based on the Burning Man in the USA, and plays drums and sings backing vocals in bands.

He still goes tramping, but as for the pilot idea — so far Stirling has been too busy focusing on the ground beneath his feet.

* For further information on how to support the Chair in Earthquake Science please go to  otago.ac.nz/alumni/donations/   or telephone the Development and Alumni Relations Office: 64 3 479 5246