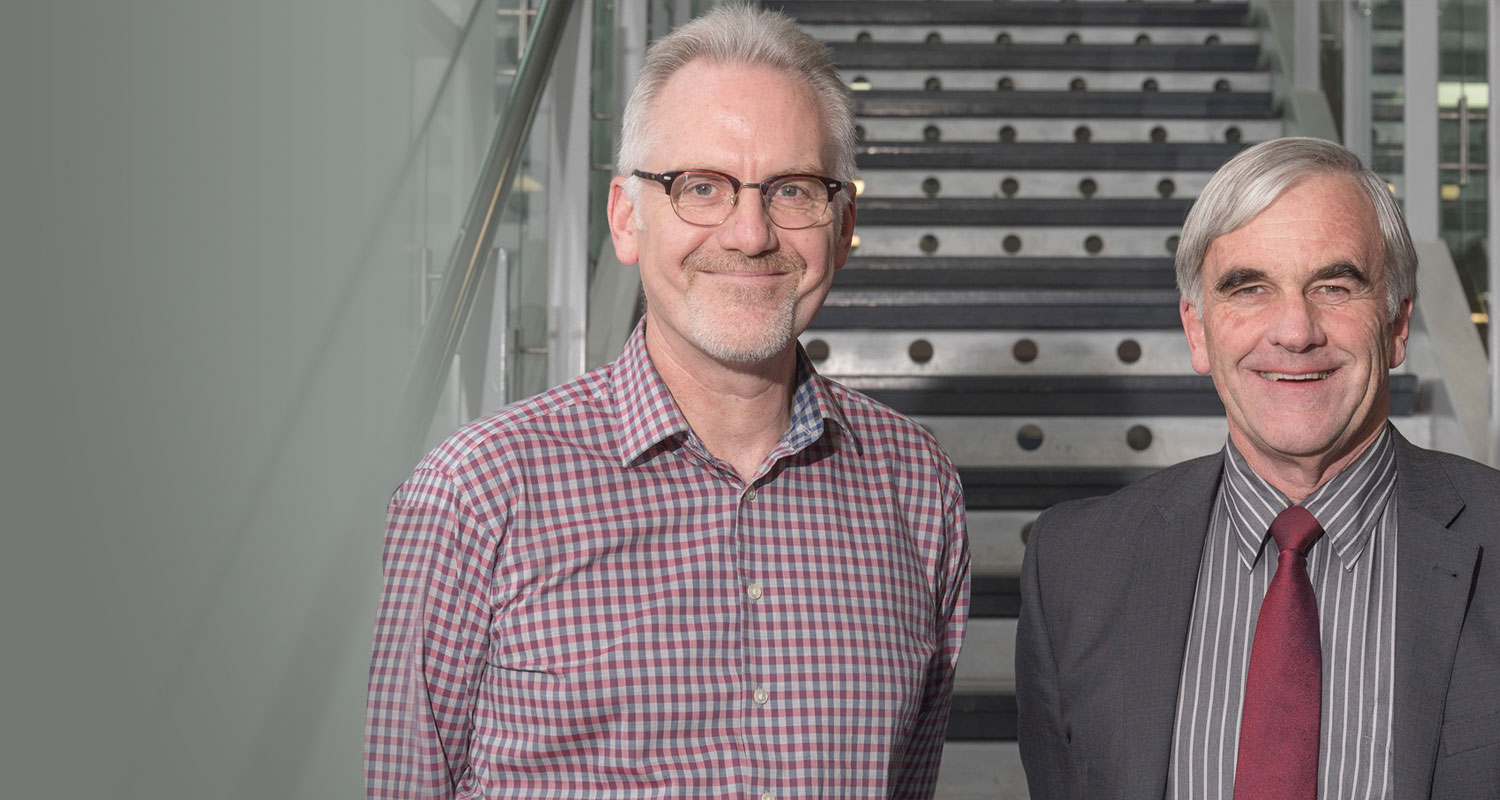 Research has been the “first love” of just-retired Dean of the University of Otago, Christchurch, Emeritus Professor Peter Joyce.

Emeritus Professor Peter Joyce has retired as Dean of the University of Otago, Christchurch after more than 40 years’ involvement with the campus, a time that began when he was a summer student in 1973 and culminating in 11 years as Dean. He retires as a respected psychiatrist, and as a Dean known for his research achievements and unwavering support for the development of research on the Christchurch campus.

Joyce entered medical school knowing he wanted to become a researcher. In his fifth year of medical school, during a consultation with a patient living with a chronic illness, he decided to specialise in psychiatry.

“I enjoyed listening to patients’ stories and came out of that chat [with the patient] and realised if I did psychiatry there would be a lot of human stories and a huge opportunity for research.”

As he reflects on his time as Dean, Joyce says his research – which he calls his “first love” – is undoubtedly his greatest achievement. This is as a researcher himself; as a supervisor of PhD students; Head of the Department of Psychological Medicine; and as Dean, where he built research capacity.

“After deciding on a career in psychiatry, I was thinking of research opportunities. Mood disorders were common and I could research them in a number of settings. As a final year medical student I came across a number of patients with bipolar disorder who had been incorrectly diagnosed as suffering from schizophrenia, and that focused me towards studying and better understanding that condition.”

After graduating from medical school in 1978, Joyce undertook a PhD with the University of Otago, Christchurch, while working as a psychiatric registrar. He then began working as a clinician, researcher and lecturer. He was appointed to the Department of Psychological Medicine in 1984 and, two years later, became the youngest University of Otago professor when, aged 34, he became Head of the Department, a position he held for 19 years until his appointment as Dean of the Christchurch campus in 2006.

Over the years, Joyce’s research has concentrated on two major approaches: clinical trials and epidemiologic/family studies. The clinical trials involved recruiting patients with depression, bipolar disorder, anorexia nervosa, bulimia nervosa and binge eating disorder. Treatment trials have included antidepressant medications and a variety of psychotherapies, especially cognitive behaviour therapy and interpersonal psychotherapy. For patients recruited to depression studies he had a particular interest in “personalised medicine” and trying to better understand which treatments worked for each individual patient.

Joyce says when he took over as Dean the campus already had a strong foundation in medical teaching and research, and four prestigious Health Research Council programmes. However, one research achievement of which he is particularly proud during his tenure as Dean was the introduction of permanent employment for top researchers.

“With no undergraduate students to teach in Christchurch, non-clinical researchers have no source of stable funding. Providing a permanent position for our best researchers recognises their value in important research studies, gaining funding and supervising postgraduate students.”

Other sources of pride are the growth in bioengineering – driven by developments in radiology and orthopaedics; the development of postgraduate nursing studies; and significant changes in medical education such as the Simulation Centre and MIHI; and curriculum development focusing on professional development and health and safety.

The statistics from Joyce’s time as Dean speak volumes. In the past decade, Christchurch students were awarded 48 per cent of all Bachelor of Medicine, Bachelor of Surgery or MB ChBs with distinction.

Murdoch takes over as Dean

For the past 16 years Professor David Murdoch has worked at the University’s Christchurch campus and, as the newly appointed Dean, is keen to let others know what a wonderful environment it is in which to work.

“We have a real strength in producing health research. A large part of our success is due to our collaboration with the Canterbury District Health Board that allows us to do clinical studies with real-world outcomes. Our researchers and teachers also collaborate on a global scale, and I am keen to grow this international involvement during my time as Dean.’’

Murdoch is a renowned infectious diseases researcher. He has played significant roles in some of the most influential infectious disease research projects, including a global childhood pneumonia study funded by the Bill & Melinda Gates Foundation, and New Zealand-wide Legionnaires’ disease surveillance programme.

Murdoch says by working together, researchers and organisations can achieve greater and mutually-beneficial outcomes for funders and patients. He is one of the leaders of One Health Aotearoa, which is an alliance between researchers working at the interface between human, animal and environmental health.

Murdoch has appointed Professor Vicky Cameron as his Deputy Dean. Her role will be to engage and build partnerships with organisations locally, nationally and internationally, and find new ways to attract postgraduate students.