The internationally recognised Dunedin study has informed health, education and social policy for more than 40 years. Now it is turning its attention to how we age.

The world-leading Dunedin Multidisciplinary Health and Development Study is breaking new ground with its greatest challenge yet.

After unprecedented and extremely detailed research into the whole lives of more than a thousand babies born in Dunedin between 1972 and 1973, the study is ramping up and entering its most exciting phase in the 45 years it has been running.

“This will be the biggest, most complex, most detailed assessment phase ever, by quite some margin,” says director Professor Richie Poulton.

As study participants enter middle age, the focus is shifting from gathering information about their growth and early development to using that data to gain insights into the inevitable human condition of getting older.

“The big-picture purpose of the study is to obtain a better understanding of the ageing process by studying the health and development of people in early mid-life. Surprisingly, not much is known about people in their mid-40s, in this country or overseas, so what we find out will be used to help policymakers and help plan better services around the world.”

The world has been following Otago’s lead for four decades, using the more than 1,200 research papers, books, book chapters and reports generated by the study to revolutionise understanding of human development and inform a wide range of policies in vital areas such as health, education and social services.

Participation by study members has been exceptional, returning to Otago to take part in research phases held every few years since they were born. Although 38 of the original 1,037 members have died, an astounding 95 per cent of the remainder are still in the study.

“I’m not aware of any other long-running study of our type with this kind of retention rate. We, as researchers, get the kudos for this and, yes, we work our butts off, but the real heroes and heroines are the study members. They just keep giving because they believe it might help others. I’m forever staggered by this amazing reservoir of goodwill.”

Research has shed light on such topics as the nature versus nurture debate; how social and psychological factors “get under the skin” to cause physical diseases; what explains premature ageing; and how and why people differ so much from each other in some respects, yet there are so many universal truths.

All the measurements painstakingly gathered for the first half of participants’ lives now take on a new value, giving researchers a unique platform from which to study how the members progress over the second half of their lives.

“We know that the ageing process starts right from the beginning of life and our people are at a critical point in their life course. They’ve now reached that point where they are starting to go down the ageing pathway. We want to figure out what lies ahead, because this is one race you don’t want to win.

“For those who are ageing quickly, we want to know why. And we want to know if ageing rapidly is predictable from what we already know about our study members. If we can identify what’s happening, can we modify environments or behaviours so we can slow down the ageing process?

“For every decade that passes, another two years are being added to life expectancy. We’re living longer than ever before, but there’s no point in living until you’re 90 if your last 10 years are not good years.

“So now we have developed a whole new suite of research measures to look at variables and predictors for ageing, and we’re setting up to study the second half of our members’ lives over the next 30 to 40 years.”

Success builds on success, and recent accolades and awards have gone a long way to supporting the new direction for the study. 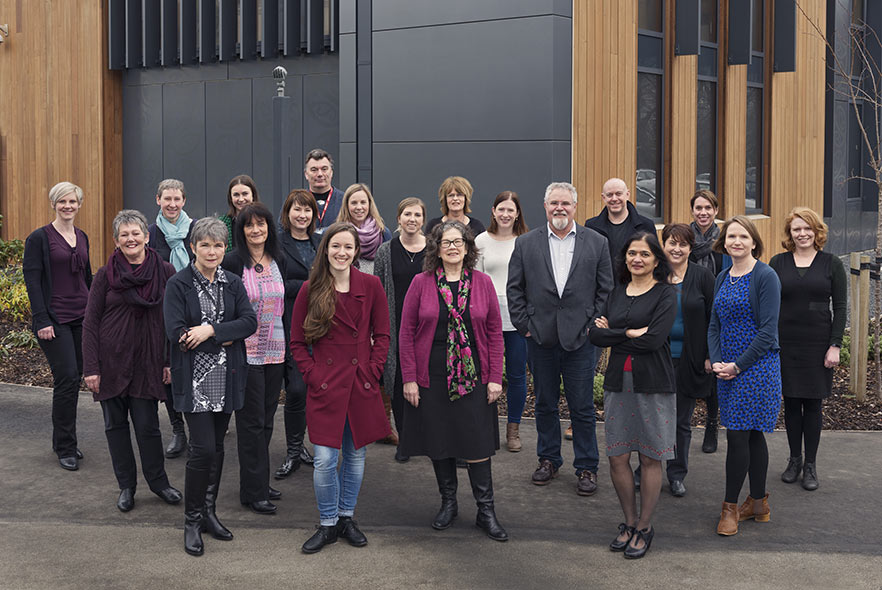 This year the Dunedin Multidisciplinary Health and Development Research Unit (DMHDRU) (above) was recognised with the prestigious Prime Minister’s Science Prize, the most valuable science award in New Zealand. The majority of the $500,000 prize has already been invested in equipment specifically for the current phase of research, adding to $140,000 worth of new technology funded by the University’s Department of Psychology.

The DMHDRU is also welcoming study members into its new headquarters, a purpose-built home near the Forsyth Barr Stadium. It’s a giant leap forward from the challenging conditions the study has worked in over the years.

Poulton’s contribution was acknowledged with his appointment as chief scientific advisor to the Ministry of Social Development and, this year, being made a Companion of the New Zealand Order of Merit in the Queen’s Birthday Honours.

“In this game, all honours won by individuals reflect the amazing contributions of many, but, in particular, research colleagues and the study members and their families and friends.

“Boiled down, the study is built on a special partnership which, of course, is all about relationships. It’s a very gritty, real human endeavour that critically depends on high levels of trust and respect between the researchers and the study participants. I’m really proud that we’ve earned and continue to maintain their trust.”

It has been a big year for the DMHDRU, but the way its future is shaping is likely to be bigger still.

Most ageing research has been done on the elderly and little is known about biological ageing in young humans, so the study aims to fill the gap.

These major diseases causing morbidity and mortality have one root cause in common – ageing – so if that process could be slowed down, it might be possible to delay all age-related diseases simultaneously, rather than treating them one at a time.

Existing research indicates that the pace of ageing may be influenced by early life experience, differences in lifestyle and genetic endowment. The Dunedin Study is now exploring its new list of research questions to see if it can find out how to slow ageing and substantially improve the quality of later life.

“This time around we’ve re-introduced studies of hearing and sight, not done since childhood. These will help lay an important mid-life baseline for monitoring changes in these important senses as people age. We’re lucky to have some top notch New Zealand researchers and practitioners leading these new assessments, including Auckland hearing and speech experts Professors Peter Thorne and Suzanne Purdy and Gisborne ophthalmologist Dr Graham Wilson.”

The study has also launched for the first time four new programmes of research headed by leading University of Otago investigators, each involving larger teams and up-and-coming younger researchers in the formative stages of their careers, a natural and healthy progression for the evolving study.

“When you look at all these new initiatives together they represent the greatest expansion at a single assessment point in the history of the Dunedin Study,” says Poulton. “We’re aiming to position the study well now to make important contributions for decades to come.”

The latest phase of assessments and the new topics are also a timely injection of new blood, involving many younger researchers whom Poulton hopes will take the study on into the future.

“We are just starting to look for indicators of rapid ageing in this latest phase. I hope we’ll find some success first time round, and that the new, younger researchers will taste that success and continue it well into their careers. There comes a time when the old guard needs to start to hand over some responsibility because, in 20 years, they’ll still be around, but we won’t.

“Despite all we have achieved to date, my sense is that we’re about to embark on a new wave of important scientific discoveries, especially as we’re going into uncharted territory in some areas. This makes coming in to work a pleasure, and promises some real excitement not too far down the track.”

2016 Winter Lecture -The Dunedin Longitudinal Study: Superb Science, but so what?

Professor Richie Poulton: Staying Ahead of the Curve 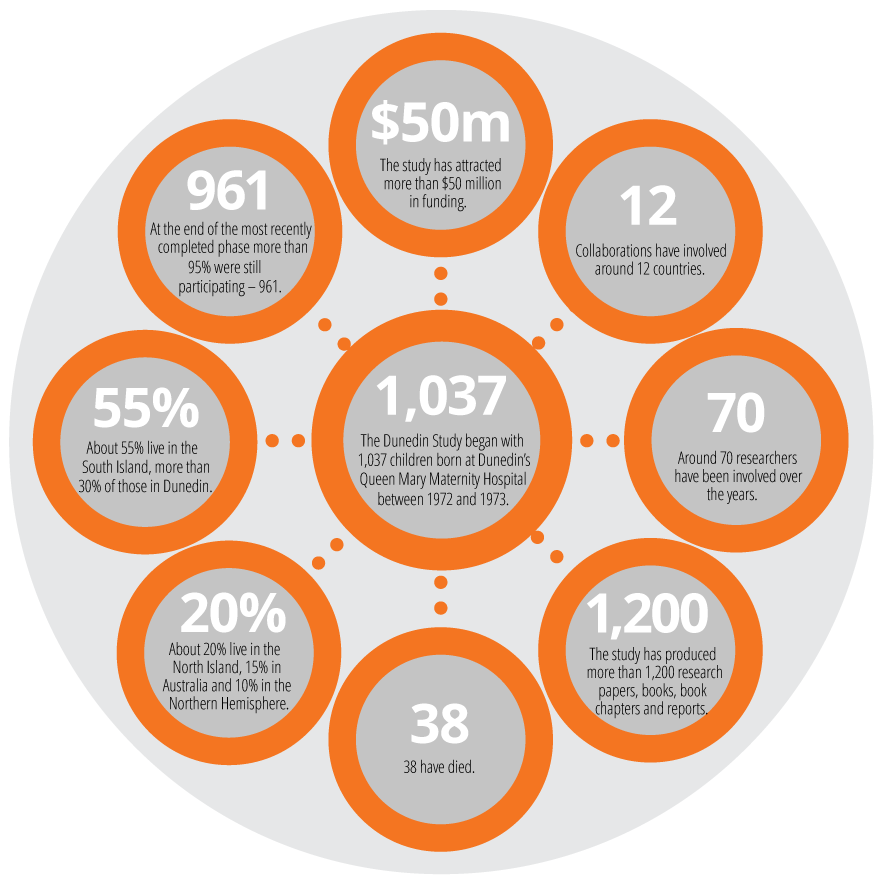