Law of the land

Law of the land

For Māori the land, sea, rivers, forests and all that lies within and stems from them came into being when Papatūānuku (Earth mother) was separated from Ranginui (the Sky) by Tāne Mahuta. Their parting let in light, and Papatūānuku became cloaked in rich and diverse life. It is this korowai (cloak) which has sustained and continues to sustain us all.

The Māori creation story is the foundation for tikanga Māori and establishes the relationship between people and whenua, the land. In te ao Māori – the Māori worldview – people do not necessarily own land or sea in the way Pākehā think of ownership; rather their responsibilities arise from longstanding association with a place. This may include the right to enjoy its bounty, but this, in turn, creates obligations to care for and manage the land.

Rights and responsibilities in relation to land are near to Jacinta Ruru’s heart, although – ironically – the seeds of this passion were sown deep in the forested heart of a landscape that was not of her own people. Her tribal affiliations – Raukawa, Ngāti Ranginui and Ngāti Maniapoto – are North Island, but she grew up in Glenorchy, at the head of Lake Wakatipu. Here her father trapped possums, hunted deer and mined for scheelite. The land provided for her family and the adjacent national park became her playground.

Ngāi Tahu country is where Ruru, now 20 years into a distinguished career at the University of Otago, remains. Her appointment in 1999 made her the University’s first permanent Māori staff member in the Faculty of Law, and she remains the only Māori permanently on staff to this day. In many ways, however, this is an anomaly that belies the considerable progress for Māori to which she has made a significant contribution through both her teaching and research, a contribution recognised in 2016 by the Prime Minister’s Supreme Award for Teaching Excellence, election as one of two first Māori women as fellows of the Royal Society Te Apārangi, and her appointment to a professorship which made her the country’s first Māori law professor.

As you might imagine, 1,500 words can’t do justice to the story of how Ruru got from Glenorchy to this point, although it seems appropriate nonetheless to use some of them to acknowledge Māori storytelling. It is these stories, after all, that have helped Ruru get to where she is today and have shaped her groundbreaking approach to legal research and education.

At 15 years of age Ruru was introduced by the greatest of gifts – a good teacher – to the writing of Patricia Grace and Witi Ihimaera. It was, she says, “a real change moment” in which she realised the power and value of the Māori voice and she determined to find her own way to express it.

At first Ruru thought documentary film-making would be her way of doing this, and she took herself off to study Politics and Māori. However, in the course of her first undergraduate degree she encountered the Treaty of Waitangi in a legal context thanks to a fellow student. A light came on. Ruru recalls “seeing the potential in law to contribute to change in a system”. 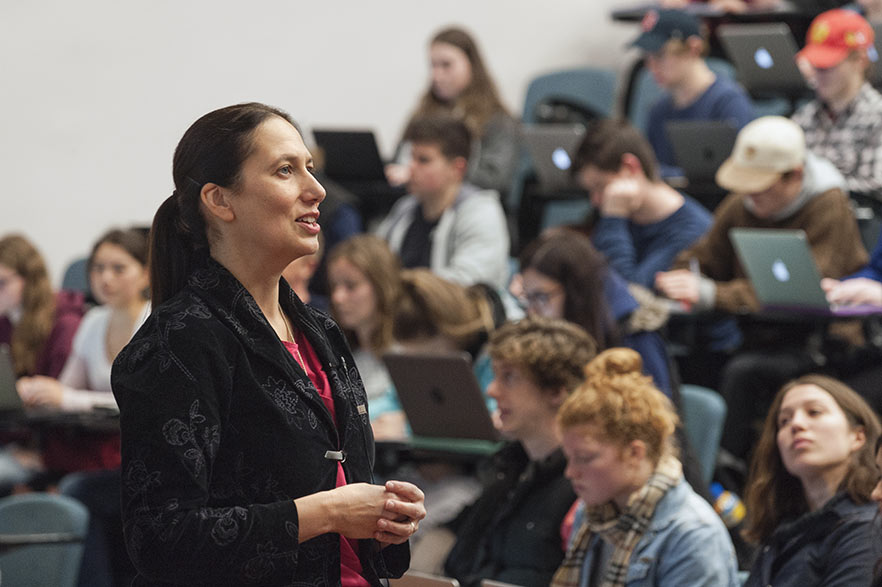 Winner of the 2016 Prime Minister's Supreme Award for Teaching Excellence, Professor Jacinta Ruru believes "all law students coming through now must have an understand of tikanga Māori to practise law in New Zealand".

Ruru completed her LLB at Otago at a seminal moment in history with the passing of the Ngāi Tahu Claims Settlement Act 1998.

“That statute was unique and groundbreaking in many ways,” says Ruru, “but for me it was the schedule, which included Ngāi Tahu stories about their land and places like Mount Earnslaw Pikirakatahi that I knew well, that was incredibly moving. I could see the power of law to tell those stories, and I began to think about law in an entirely new way that’s much more respectful of Māori relationships with land.”

Her master’s thesis, begun in 1999, investigated how – or, perhaps more accurately, whether – the management of New Zealand’s conservation estate was giving effect to the principles of the Treaty of Waitangi as stipulated under the terms of its governing statute, the Conservation Act 1987. Then, in 2006, Ruru embarked on her doctoral project, a comparative study exploring indigenous peoples’ relationship with national parks in New Zealand and Canada. In this she was supervised by the distinguished First Nations scholar Professor John Borrows, whose own use of indigenous storytelling in law had inspired Ruru.

Ruru’s research since then – and there is a significant body of it, with more than 90 publications to date – has encompassed subjects such as rights to fresh water; comparative studies of indigenous rights in New Zealand, Canada, Australia and Scandinavia; and a re-evaluation of the Common Law Doctrine of Discovery. Current research interests include a collaborative legal analysis of the experience of Ngā Rauru in relation to proposed extractive industries, a survey of Māori approaches to caring for Tāne Mahuta (forests) and a study of the legal issues associated with building residential housing on Māori land. She is also involved in a review of the Wildlife Act 1953, exploring how it might better enable Māori to have a relationship with species that are integral to their cultural survival and identity.

“In my early-career years I felt I was being pulled in different directions,” she recalls, “but more recently I’ve realised that all my research is around indigenous people’s rights, responsibilities and opportunities to own, manage and govern land and water.”

Ruru describes being the only Māori academic staff member in the Faculty of Law as a privilege, in that it gives her the opportunity to work with and mentor Māori students (tauira). In 2015 she established a programme called Te Ihaka: Building Māori Leaders in Law, named after esteemed alumnus Chief Judge Wilson Isaac. The programme has been instrumental in supporting tauira Māori to succeed in law. Ruru points to an encouraging increase in the tauira Māori cohort – numbers have doubled over the last few years – and improvement in the level of achievement. In 2016 the top mark in Laws 101 was achieved by a Māori student, while recent graduates have gone on to undertake postgraduate study in Ivy League colleges and clerk for New Zealand’s Supreme Court.

Part of the idea for Te Ihaka came from a casual conversation between Ruru and a University of Auckland colleague at a Māori research hui in which the engineering lecturer, Dr Kepa Morgan, shared stories about a “boot camp” aimed at supporting Māori engineering students. Ruru was inspired to develop Te Ihaka and, in turn, others now build on her ideas to develop similar programmes in other disciplines. She says that such networking helps Māori academic staff overcome the isolation associated with being a minority in most disciplines and sparks interdisciplinary research opportunities.

Ruru is co-chair of Te Poutama Māori, a caucus for the 70-plus Māori academic staff members who are spread across Otago’s three campuses, and co-director of Poutama Ara Rau, the University’s research theme dedicated to Māori research and teaching excellence.

At the national level she is co-director of Ngā Pae o te Māramatanga New Zealand’s Maori Centre of Research Excellence, one of the country’s top 10 centres of research excellence. The centre has 21 partner research entities, including universities, polytechnics, wānanga and Crown Research Institutes, inspiring and enabling significant new Māori-led student and scholar research.

Ruru describes Ngā Pae o te Māramatanga as “a powerful network of Māori researchers who want to make a difference by doing useful research that will help further transform Māori communities and the nation”.

“Our vision is Māori leading New Zealand into the future,” she explains, “because we believe that Māori innovation will enable us to find many of the solutions our country needs going forward.”

This passion for the potential of tikanga Māori is reflected in Ruru’s teaching practice. She teaches papers in Māori Land Law and Law and Indigenous Peoples, and also the first-year law paper that all intending law students tackle. In all her courses Ruru introduces students to some of the stories that inspired her, including those embedded in the Ngāi Tahu Settlement Act, which she sees as particularly relevant given the University’s location.

“I find story an engaging way to connect with students and excite them about the possibilities they may have in the law. I think, as a profession, we’re on the cusp of appreciating the wealth of knowledge that Māori can bring to our legal system and realising that all law students coming through now must have an understanding of tikanga Māori to practise law in New Zealand.”

Ruru tells her own stories of students, both Māori and Pākehā, who have expressed appreciation to her for helping them see the world in new ways – something she believes is the role of university teachers. She also sees the new affirming influence of tikanga Māori on New Zealand law – she cites the 2003 conclusive over-ruling of the historic Wi Parata decision, which ruled the Treaty of Waitangi as a “simple nullity”, and a 2012 Supreme Court decision recognising tikanga Māori as part of our common law – as an opportunity for everyone.

“Māori law sits differently to Western law – there are some fundamental belief differences. One is values-based, while the other is more rights-based. But it’s not that one is better than the other; there are just different ways. As a country let’s look for the best of the solutions and opportunities for all of us.”

A place for all