The 2017 University of Otago Award for Exceptional Performance by General Staff was jointly awarded to two women who work tirelessly to enhance the University and its contributions to the community – the co-ordinator of the University Volunteer Centre Sze-En Watts (above left) and the director of the University’s New Zealand Marine Studies Centre Sally Carson (above right).

Sally Carson leads the University’s New Zealand Marine Studies Centre (NZMSCS) at Portobello and, in addition to the schools and community education programmes offered by the centre, she is the driving force behind many other outreach initiatives including the creation of the New Zealand Shore Guides publications; the Marine Metre Squared (Mm2) project, a nationwide citizen science initiative that encourages long-term monitoring of the New Zealand seashore; and the new Marine Science Aquavan, a facility which can be used by researchers to transport marine specimens and bring the marine world to schools and community.

The second reward recipient Sze-En Watts was employed in 2013 to co-ordinate the newly-created University Volunteer Centre (UVC) and has also been praised for performing well beyond expectations.

Her achievements include co-ordinating a community-wide project to send 600 boxes of crafts and learning materials to Vanuatu following Cyclone Pam; driving the country’s first Student Volunteer Week in 2015; running the Dunedin Sleep Out; co-ordinating the University of Otago Student Leadership Award; and joining the Otago delegation to the Global Citizenship Workshop for the Matariki Network of Universities in Uppsala, Sweden.

The award, which was instituted in 2004, recognises and rewards members of the general staff who have made an outstanding contribution to the University of Otago. The winners receive a grant for a project or professional development initiative that benefits the University as well as the individual.

Dunedin breakfast cereal manufacturer Harraway & Son Ltd has made a $100,000 donation to Otago’s Department of Food Science in recognition of a long association with the University.

The gift was announced at Harraway’s 150th anniversary celebrations in June and establishes the Harraway’s 1867 Visiting Professorship for the Department of Food Science. It will be split into a yearly grant for five years, at $20,000 for visiting professors.

Harraway’s CEO Mr Stuart Hammer says the University has been an important resource for the company.

“The Department of Food Science has been invaluable in helping us develop new products and allowing us to tap into their knowledge and scientific expertise. We have been able to employ excellent graduates and, each year, we engage undergraduate food science students to carry out projects that have generated great new ideas.

“In more recent years we have also enjoyed a strong relationship with staff and students in the Department of Marketing, drawing from their knowledge in areas such as digital marketing."

Mr Hammer says the Harraway’s 1867 Visiting Professorship is about Harraway giving back and will bring added expertise into the country, helping the local community and New Zealand as a whole. 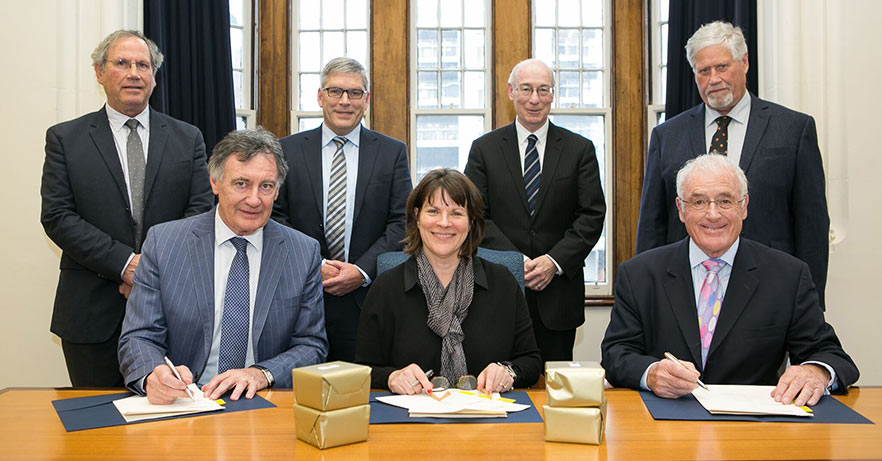 University of Otago researchers from the Dunedin, Wellington and Christchurch campuses have been awarded more than $24 million in new health research funding to support their world-class studies aimed at improving New Zealanders' health and well-being.

The Health Research Council of New Zealand’s latest round of funding supported 19 Otago contracts, including a major multi-million, five-year programme which will examine ways of reducing the burden of stomach cancer in New Zealand. The other projects range from an implantable light stimulator to treat Parkinson's disease, to examining community exercise for long-term management of diabetes and multi-morbidity; from studies into fertility and antibiotic resistance in superbugs, to heart failure and the familial risks of ovarian and breast cancer.

The University of Otago is to lead a $35 million project known as Genomics Aotearoa, a new science platform supporting advanced genomics research.

Led by Professor Peter Dearden at the University of Otago, Genomics Aotearoa is an alliance between the Universities of Auckland and Massey, Crown Research Institutes AgResearch, ESR, Landcare Research, and Plant and Food, and 32 associate organisations including researchers and end users of genomics and bioinformatics.

Funding will come from the Government’s Strategic Science Investment Fund and follows a competitive two-stage application and assessment process managed by the Ministry of Business, Innovation and Employment.

Announcing the new platform, Science and Innovation Minister Hon Paul Goldsmith said: “Genomics Aotearoa presented a strong proposal that was comprehensive in scope and ambition, and seeks to cement national collaboration between genomic researchers and end-users across all life sciences of relevance to New Zealand’s economic, environmental and social well-being.

“This platform represents a new, strategic approach to Government investment in genomics that allows us to build on our existing research capability and remain agile to respond to future opportunities in technologies and approaches.”

The University was placed 151 in the latest QS World Rankings, an improvement of 18 places from last year. This reflects gains across a range of areas including academic and employer reputation, citations per academic staff member and the international faculty indicator in which Otago was placed 28th globally.

The University maintained its overall position in the 201-250 band of the Times Higher Education World University Rankings announced in September, confirming its position within the top echelon of the top two-to-three per cent of universities worldwide, and as one of New Zealand’s top two universities.

Otago was also ranked 31st in the Times Higher Education Asia-Pacific Rankings, which analyse universities throughout 38 nations based on a range of performance indicators including teaching and learning environment, research, citations, international outlook and industry income. 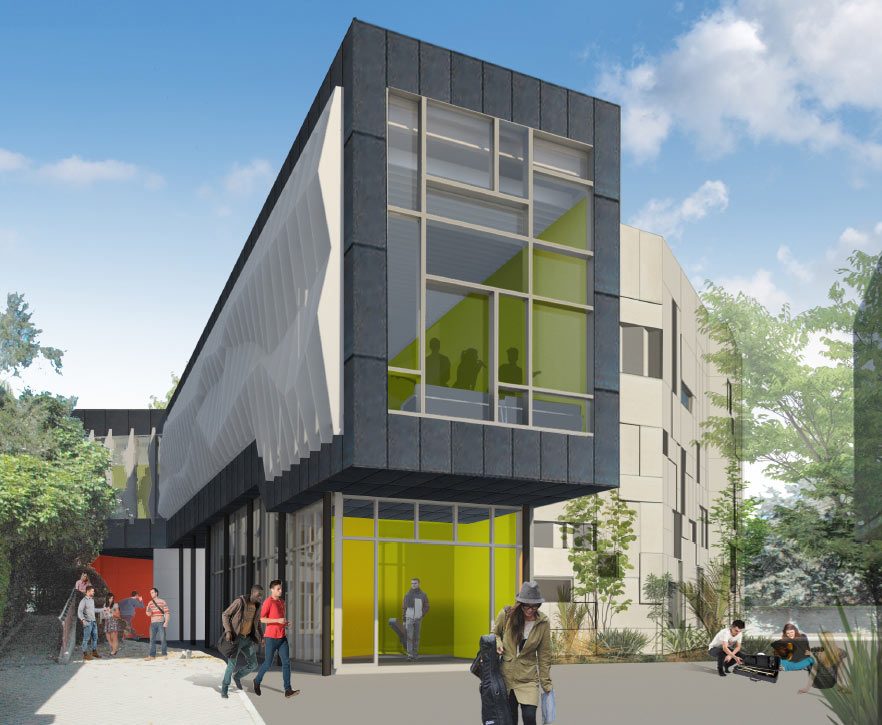 The University has announced plans to build new – and update existing - facilities for the Department of Music, Theatre and Performing Arts Te Kāhui Tau.

The $26 million project is expected to be completed by the start of the 2019 academic year. With purpose-built recording studios, flexible teaching areas and communal areas in which students can showcase their work, the facilities will foster collaboration between the department, college and the music community, potentially developing a research strength unique to Otago.

Deputy Vice-Chancellor (Research and Enterprise) Professor Richard Blaikie says the new facility will be state-of-the-art in the Asia Pacific region and will future-proof Otago’s status as a leading scientific institution.

The University’s Māori Strategic Framework (MSF) to 2022 was launched in June.

This builds on the inaugural 2007 framework, continuing to develop engagement with iwi and Māori entities; deepening the University’s commitment to achieving equitable Māori participation and success rates in tertiary education; and pursuing ambitious goals around embedding mātauranga Māori within the University’s core functions.

The Centre for Translational Physiology/Te Whaiaroaro Whakawhiti at the Wellington campus was officially opened in August. University of Otago, Wellington Dean Professor Sunny Collings says the centre provides a platform to enhance collaborative research between scientists and clinical researchers, using a unique set of facilities to address large clinical issues.

The University of Otago’s senior women’s and senior men’s eights rowing teams have “won big” in China in the 2017 International Universities Rowing Regatta.

The Otago senior women’s eight team took out the winning title in both Hangzhou and Changsha, beating teams from 10 international universities, including Yale, Oxford, Harvard, Chengdu University and Sydney University. It was the fifth successive year that the Otago women’s team has been unbeaten in both domestic and international races.

Leading cancer researcher Professor Parry Guilford (Biochemistry) is this year’s recipient of the University’s Distinguished Research Medal, which recognises outstanding scholarly achievement. Professor Guilford’s breakthrough genetic findings have led to interventions that have saved the lives of many people with inherited stomach cancer and he continues to make important progress in developing innovative tests for detecting, and monitoring the progression of, other deadly cancers, such as bladder cancer.

The contributions of three Otago teachers were honoured at the Tertiary Teaching Excellence Awards in August. Associate Professor Ruth Fitzgerald of Anthropology and Archaeology, Anatomy Teaching Fellow Dr Brad Hurren and Japanese teaching fellow in the Department of Languages and Cultures Haruko Stuart each received Sustained Excellence Awards for their dedication and passion in their respective fields.

Professor Sylvie Chetty (Centre for Entrepreneurship) received an honorary doctorate from Sweden’s Uppsala University, recognising her ongoing ties with that university since 1997.

Former Vice-Chancellor Professor Sir David Skegg received an honorary doctorate from Queen’s University in recognition of his global contribution to health research, university leadership and his innovative and strategic approach.

Professor Barbara Brookes (History and Art History) won the Ockham Book Award in the illustrated non-fiction category for her book A History of New Zealand Women.

First-year student Sisilia Laumanu was awarded one of eight national $25,000 Toloa Scholarships from the Ministry of Pacific Peoples for students studying in science, technology, engineering and mathematics (STEM) subjects.

Internationally renowned physiotherapist Dr Stanley Paris received an honorary degree of Doctor of Laws from the University of Otago in August. Dr Paris is a pioneer in the manual and manipulative physiotherapy, an endurance athlete and noted philanthropist.