What key attributes are required to practise medicine in a country most people in the West cannot identify on a map? Aside from recourse to years of experience, the answer – according to Otago alumnus Dr Nick Woolfield – is self-reliance and self-sufficiency. 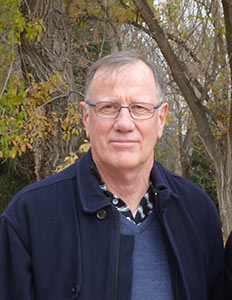 Paediatrician Dr Nick Woolfield says that the skills he gained during his rural upbringing in the Bay of Plenty and while studying medicine at the University of Otago – coupled with lessons learnt during three decades practising in Australia and New Zealand – now underpin his work in a remote region in Kyrgyzstan treating children with cerebral palsy (CP).

Woolfield, with wife Fay, arrived in the Central Asian country in 2013 as a volunteer with the Scientific Technical and Language Institute.
He now does clinical work at the Soviet-era Ak-Suu sanatorium in the Issyk-Kul province, where he is involved in multiple initiatives to inform policy and improve treatment, rehabilitation and education processes nationwide.

“We considered this type of work earlier in life, but embarking on this adventure as a more experienced health-care professional has been hugely beneficial. I’m drawing on professional and personal knowledge that has formed a strong foundation for my wide-ranging work here.”

Recognition of how his work is changing the medical landscape nationally came in July last year when Woolfield received a medal and commendation from Kyrgyzstan’s Ministry of Health for progressing health in the country, and a certificate from the province’s governor acknowledging work done in conjunction with UNICEF. And, late last year, Kyrgyzstan’s Department of Labour and Social Development awarded him its highest honour for his work.

“I think the best thing about these awards is that they show the authorities’ engagement in the process of change and that, long term, what we are doing will assist both the children and the country.”

His clinical and public health work in the landlocked Central Asian country is part of a multi-agency partnership that includes UNICEF and Japanese aid group JICA, with funding from several countries, including New Zealand and Australia and support from Kyrgyzstan’s Ministry of Health.

While he is making “steady progress introducing treatments that work and stopping ones that don’t”, much remains to be done in a country where the number of children with CP is several times higher than in Western countries.

He estimates he sees more cases of dyskinetic CP – one of the most disabling forms of the condition – in a month in Kyrgyzstan than he did “in 30 years in Australia”.

Sadly, many cases are the result of severe jaundice, while others are linked with mother-child rhesus incompatibility. An overarching theme is that many cases are preventable “at a low cost”.

This highlights the need for effective preventive strategies that will inform health policy nationally, he says.

“I’ve been involved in writing a number of national guidelines, which is challenging, but over time and considering local resource levels, I believe we can implement good practice despite the limited resource base.”

A first step in this process has been gathering and analysing information on children coming to Ak-Suu, which Woolfield and staff have done since 2015. At any time about 130 children with CP are patients at the sanatorium.

A key finding was that many children who came to the hospital with acute illness ended up with brain damage. This realisation led Woolfield, with UNICEF support, to initiate paediatric advanced life support training for specialists and now more than 200 doctors and nurses have received this training.

Last year he began a national CP database and information on more than 750 children has since been added. Once more data – including factors determining risk – is integrated the database will guide resource allocation and inform efforts to manage CP and associated conditions.

Anecdotally, “half or more” of the mothers of children who present with CP have suffered violence during pregnancy, and Woolfield says solid data on possible links between domestic violence and the disability may greatly aid preventive measures.

Educating health-care professionals to work in their own regions to improve outcomes for children with CP is also a priority. In 2015 he was joined by three Allied Health specialists to train 28 Kyrgyz professionals in diagnosis and management of cerebral palsy. Earlier this year he held training sessions with a group from south Kyrgyzstan.

“It is very pleasing to see that training is now becoming established as the norm and part of every physician’s work.”

He also works with agencies and parent groups that support the parents of children with disability.

Another priority has been introducing the international classification of functioning, disability and health model for children with disability. The preceding system categorised children as either disabled, or otherwise, and this limited the potential for rehabilitation programmes to be developed for individual cases.

Crucially, better methods for determining levels of disability may also challenge negative perceptions associated with CP and other conditions.

Once children have a “disabled” label, schools are reluctant to accept them. There is also a reluctance to accept that these children can actually do well at school, he says.

Woolfield estimates that while between a third and a half of the children he sees at Ak-Suu could attend a regular school, a much smaller number actually do. Many children with CP are sent to institutions or kept at home.

“One of the challenges is transferring our up-to-date knowledge base from the West to a low-resource nation, and seeing it implemented for improved outcomes. The research work, which is mostly data gathering – and there are so little accurate data here – has assisted in bringing about national changes.

“A legacy of the Soviet era is the continuation of many practices that are not supported by evidence, and we are slowly seeing these change and disappear – but this may take another generation.”

“I’m forced to rely mostly on skills and experience, especially in decision-making. MRIs are available in the capital Bishkek, but lab work is mostly basic stuff with limited metabolic work available.”

Woolfield says that during clinical training in Christchurch – he graduated with a Bachelor of Medicine and Bachelor of Surgery in 1978 and a Postgraduate Diploma in Child Health in 1982 – several Otago faculty members challenged him to continuously strive to develop better skills.

“I particularly remember Ross Bailey, Don Beavan (then Professor of Medicine) and, most of all, George Abbott emphasising the importance of getting good clinical skills and the need to hone them well.

“George was particularly astute in his clinical and deductive skills; assessing what needed doing and what needed not to be done. Now that I’m somewhere with limited investigative abilities I am glad that these people assisted, inspired and challenged me – I have to use this ability constantly in decision-making.”

As with his clinical work, a high degree of self-sufficiency and practical skills are essential for life in the remote mountainous region where he and Fay have bought a property. Along with the “standard chickens and a dog”, which most Kyrgyz houses have, Woolfield is also brushing up on his horticultural skills. In a climate that is “like Central Otago’s, just at higher altitude” their apricot, cherry and apple trees produce good fruit each summer.

“More impressive than any of my medical skills to my local friends is that a doctor can fix taps, repair the roof, fix the car, make furniture and kill a sheep. These skills, learnt during my upbringing on a farm in the eastern Bay of Plenty, have been invaluable here. When things break you need to fix them because there’s little alternative.”

The nearby Ak-Suu sanatorium is located in an area with no mobile coverage, but the installation of a 10 kilometre fibre optic cable from the nearest village means Woolfield and his colleagues can hold telemedicine conferences from a fully-equipped room. The funds for this came from a grant from the Australian embassy in Moscow.

Since December he has held several of these meetings with five centres across the country at which doctors present and discuss cases.

“[In early December], for example, we used the teleconference to look at the case of a child with CP who cannot safely take food orally and now has a gastrostomy tube in place – this led to wider discussion on ways we can work out which children this is necessary for.”

Access to internet capabilities also allows the Woolfields to keep in touch with family in Australia, and these connections may mean they stay in the remote region for longer.

He is also motivated to stay and ensure the work he and others have started is continued for the long-term benefit of many children with CP and other disabilities in Kyrgyzstan.

“One of the challenges in paediatric medicine is bringing the great developments and achievements in child health that have occurred in the West to low-resource countries with developing or emerging economies, and countries that have most of the world’s paediatric population."

“The challenge is to contextualise these advancements and I think it’s what we are doing here bit by bit.”

Woolfield says the experience has reaffirmed his belief both in the need to think like a global citizen to identify where specialist skills can be put to use for the greatest benefit, and in the value of education.

“One of the greatest gifts we get in the West, at institutions like Otago, is a sound and excellent education. Many places do not have this so we need to ensure access for all, and create opportunities that mean the quality of that education is forever maintained.”

Ahead of the crowd