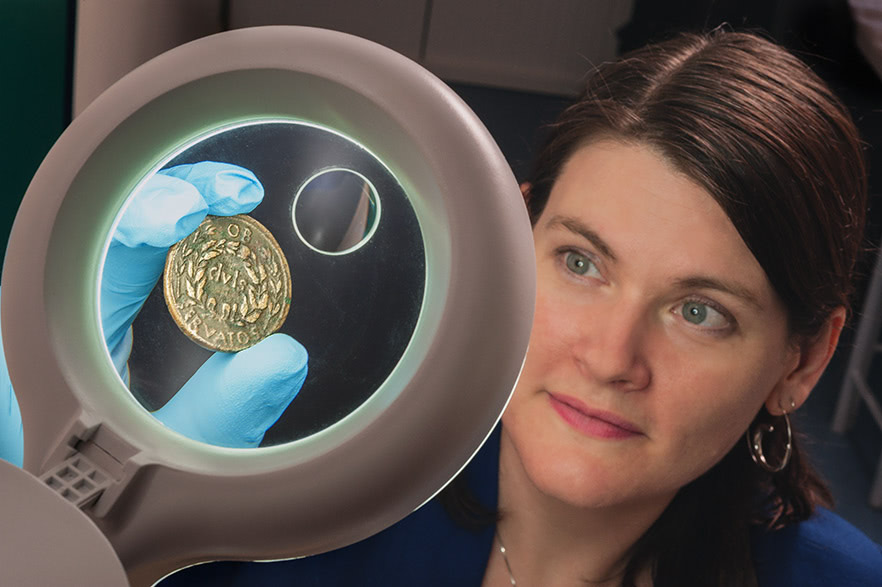 Dr Gwynaeth McIntyre: “We have the best Roman coin collection in New Zealand and it rivals some of those found in large research institutions overseas.”

A collection of Roman coins at the Otago Museum is gaining greater currency.

Dr Gwynaeth McIntyre and Dr Daniel Osland (Classics) are studying the coins and having them digitalised to make them publicly available online.

McIntyre says that most of the 1,000 or so coins were either gifted by the Dunedin businessman and philanthropist Willi Fels or purchased with money he donated.

They date from 211 BC through to the fifth century AD. One is gold and the rest are silver, brass and bronze.

“We have the best Roman coin collection in New Zealand and it rivals some of those found in large research institutions overseas,” McIntyre says.

“About half are low denomination coins and very worn. Collectors don’t tend to go out of their way to collect these coins so we suspect they came from a buried coin horde, potentially from France or Britain.”

McIntyre notes that a few dozen Roman coins are on public display at the museum – but visitors only get to see one side – and the rest are stored in boxes in the museum vault.

She says that the coins were organised by date in about the 1950s but are now being photographed by Dr Charlotte Dunn and catalogued prior to being displayed online. McIntyre is also incorporating the digital images into her teaching.

She explains that the coins are quite small and people will be better able to see the detail in the online images, along with explanations of each coin’s importance.