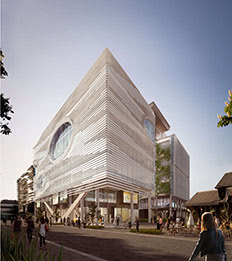 The University last month announced it will construct a new state-of-the-art building to expand its Christchurch health campus. It will cost an estimated $150 million and be the biggest construction project the University has ever undertaken.

When the six-storey building is completed in 2022, it will house much of the health campus’ research facilities, and open up the possibility of other University of Otago courses being taught there.

It will be constructed on a site on Oxford Terrace, close to Christchurch Hospital and the campus’ existing building.

This project is part of an almost half-a-billion-dollars-worth of construction investment the University has underway or recently completed. Other major projects include the $130 million New Zealand national dentistry centre project in Dunedin; a bespoke dental facility for Counties-Manukau in Auckland (see following story); a new Research Support Facility, Music and Theatre facility, and the refurbishment of many of the University’s College of Education buildings in Dunedin.

Vice-Chancellor Professor Harlene Hayne says the new building will enable the growth of the Christchurch campus’ world-class health science research and education programmes. “We have had a very successful health science campus in Christchurch for 45 years. This investment shows our commitment to both the campus, the city and its people.”

Otago’s Christchurch campus is a training base for medical students in their three clinical years. It is also a research-intensive campus, hosting a number of world-class research groups and postgraduate health science students. There are currently more than 1,000 students studying there.

The new building will house the campus’ laboratories and most of its health research groups, including specialist radiology equipment. It will also be home to groups seeking to commercialise their health science discoveries.

Dean of the University of Otago, Christchurch, Professor David Murdoch says the new building will create a true campus feel for staff and students, with the two buildings less than a minute’s walk from each other. It will contain an adaptable lecture theatre for teaching, public events, and will bring staff and students together for learning and collaboration. 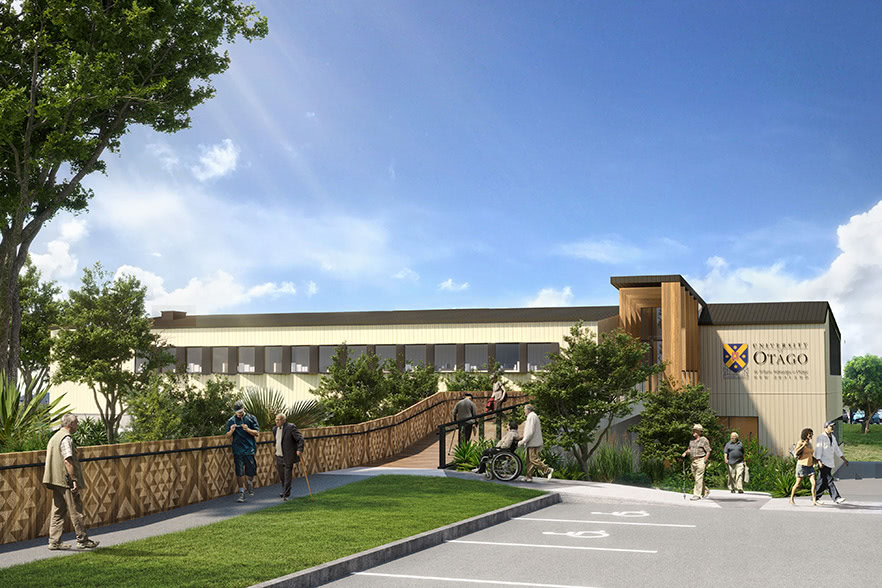 The University of Otago is building a dental teaching facility and patient treatment clinic in South Auckland to help meet health needs, while providing students with wide-ranging learning opportunities in a diverse community.

University of Otago Vice-Chancellor Professor Harlene Hayne says that by making a real difference to people’s lives and a community’s health and well-being, the University will be living its strategic commitment to providing for the national good and improving lives.

The $28.2 million, two-storey, 32-chair building will be built on land owned by the Counties Manukau District Health Board at its Manukau Super Clinic on Great South Road.

The Faculty of Dentistry will regularly consult the community to find out what it needs from the clinics then work to deliver that, and will also provide a wide range of outreach activities.

Pro-Vice-Chancellor Health Sciences, Professor Paul Brunton, says the project is a win-win situation for both the local community and the University.

“Patients are contributing to the education of the country’s future dentists and, in exchange, they have access to high-quality dental care.”

Forty-eight final-year Bachelor of Dental Surgery students will be assigned to the Counties Manukau facility at any one time.

Brunton says treating people in Counties Manukau is only possible because of a much-valued relationship with the district health board, which led to the two institutions signing a memorandum of understanding in November 2014 so they could work together to achieve mutual goals.

University of Otago researchers from the Dunedin, Wellington and Christchurch campuses have been awarded almost $19 million in new health research funding to support their world-class studies aimed at improving New Zealanders’ health and well-being.

The Health Research Council of New Zealand’s latest round of funding supported 17 Otago contracts, including a study, led by Professor Pauline Norris (Pharmacy), which will investigate whether the price of medications is preventing low income New Zealanders from accessing their prescriptions. Norris says a randomised controlled trial of prescription charges is something she and her team have been planning for some time, which will generate some very useful information to present to policymakers. 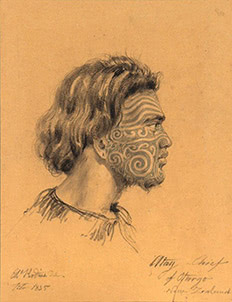 A portrait of a Māori chief from Otago arrived home at the end of July, more than 180 years after it was sketched in Sydney, Australia.

The portrait of “Atay – Chief of Otargo”, by German convict artist Charles Rodius, arrived to a karakia as it made its way to the Hocken Collections – Uare Taoka o Hākena. The portrait has been repaired since being bought at auction by the Hocken in December.

Speaking on behalf of Te Runaka o Ōtākou, Office of Māori Development director Tuari Potiki welcomed the portrait back to the Hocken and to the land. He says the runaka will be working with the Hocken to identify the chief.

An initiative that has enabled more than 100 students, many from Otago, to undertake voluntary work abroad since 2006 has been given a new lease oflife, following the signing of a memorandum of understanding by Vice-Chancellor Professor Harlene Hayne and Volunteer Service Abroad (VSA) CEO Stephen Goodman in Wellington in May.

The UniVol programme at Otago allows third-year and postgraduate students to go to Pacific region countries on 10-month placements to gain hands-on experience of working in communities in developing countries in the wider Pacific region.

The Vice-Chancellor says the retention of this very successful programme and signing of the MOU means ongoing life-changing experiences for Otago students. 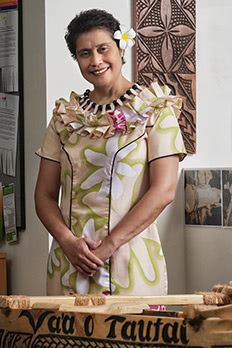 For the sixth time in seven years, the University of Otago has the top tertiary teacher in New Zealand.

She also received an endorsement for Excellence in Supporting Pacific Learners, a reflection of her exceptional commitment to curriculum development and pastoral care of Pacific students.

University of Otago Vice-Chancellor Professor Harlene Hayne has offered her warmest congratulations to the Otago recipients of the awards, and in particular, the outstanding achievement of Faumuina Associate Professor Fa’afetai Sopoaga.

“I am enormously proud that once again, our teachers at the University of Otago are achieving at the highest level in New Zealand. For all the dedication and hard work I know they put into their teaching, they richly deserve this recognition.”

The awards, hosted by Hon. Chris Hipkins, Minister of Education, are administered and managed on his behalf by Ako Aotearoa – the National Centre for Tertiary Teaching Excellence.

In August, the University announced it is now on track to record a roll increase of around 380 equivalent full-time students (EFTS) for 2018.

Earlier in the year enrolments were tracking 300 EFTS ahead of the same time in 2017, but growth has strengthened further following a strong uptake for second semester courses and research degree study. 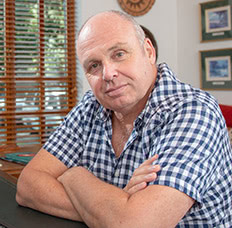 Christchurch bowel cancer researcher Professor Frank Frizelle has been awarded an honorary fellowship from the Royal College of Surgeons in Ireland. The award is the highest honour bestowed by one of the world’s largest surgical colleges. 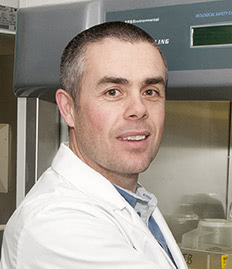 Dr Logan Walker (Mackenzie Cancer Research Group, Christchurch), a geneticist specialising in breast and ovarian cancer, has recently been appointed as the leader of an international working group for the Evidence-Based Network for the Interpretation of Germline Mutant Alleles.

Professor Neil Gemmell (Anatomy) received the Genetics Society of AustralAsia MJD White Medal for his contributions to the field of genetics. This is the first time the award has been bestowed upon a New Zealand-based academic. (See story page 6.)

Professor Gary Wilson (Marine Science) has been elected vice-president of the Scientific Committee on Antarctic Research (SCAR). SCAR is responsible for initiating, developing and co-ordinating international scientific research in Antarctica and the Southern Ocean. 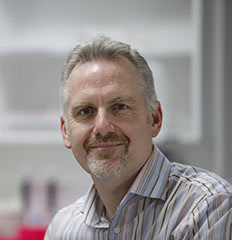 Professor David Murdoch (Dean, University of Otago, Christchurch) was recently appointed to the newly-established International Council on Adult Immunisation, which is charged with providing technical expertise and leadership to advance the agenda of adult immunisation globally.

Associate Professor Rhiannon Braund (Preventive and Social Medicine) was made a Fellow of the Pharmaceutical Society of New Zealand for the significant impact she has made on her profession at a national and local level. 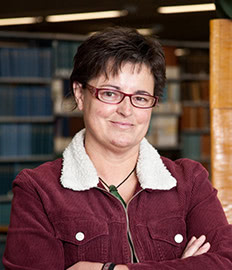 Three Otago geographers were celebrated at this year’s New Zealand Geographical Society awards ceremony. Professor Michelle Thompson-Fawcett was awarded the 2018 Distinguished New Zealand Geographer Award and Medal in recognition of her work in Māori and Indigenous geography, iwi resource management and development and planning. Professor Etienne Nel received an award for Service to the Geographical Society, recognising his seven years as managing editor and chair of the editorial board of the society's journal, The New Zealand Geographer. PhD graduate Dr Jerram Bateman won Best Doctoral Thesis. 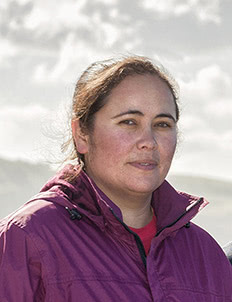 School of Physical Education, Sport and Exercise Sciences senior lecturer, and co-director of Te Koronga, Dr Anne-Marie Jackson (Ngāti Whātua, Ngāti Kahu, Te Roroa) is one of three people profiled for their efforts to diversify academic learning environments in Nature, one of the world’s most prestigious academic journals.

Pauline Smith (College of Education) has won the Best First Book award at the 2018 New Zealand Book Awards for Children and Young Adults for her debut novel Dawn Raid.

Professor Paul Brunton as the new Pro-Vice-Chancellor of the Division of Health Sciences. A former British dental researcher and educator, Brunton came to New Zealand in 2015 to take up the role of Dean of the Faculty of Dentistry. He replaces Professor Peter Crampton who is stepping down from his roles as Pro-Vice-Chancellor of the Division of Health Sciences and Dean of the Otago Medical School.

Professor Richard Barker’s appointment as the Pro-Vice-Chancellor of the Division of Sciences has been extended. He was initially appointed for an 18-month term following the retirement of Professor Keith Hunter in 2016 and the extension adjusts his appointment to the usual five-year term.

Acclaimed Scottish novelist Val McDermid as a Visiting Professor of Scottish Studies and Crime Fiction, in the Division of Humanities, from 2019 to 2021.

Mr Chris Stoddart as Registrar and Secretary to the Council. He will take up his new role at the end of September.

Dr Martin Gagnon as the University’s new Director of Research and Enterprise.

Knight Companion of the New Zealand Order of Merit (KNZM):
The Right Honourable Sir Simon William (Bill) English, for services to the State.

A well-regarded organic chemist and a Fellow of the Royal Society of New Zealand, he joined the staff of the University of Otago in 1945 and became professor in 1966. He held several senior roles during his years at Otago including head of the Department of Chemistry and Dean of the Faculty of Science. He is noted for his contribution to natural product chemistry and was a key figure in the introduction of NMR spectroscopy to modernise chemistry research. He led the planning which led to the development of new Chemistry buildings in the early 1970s. He retired in 1983.

An experienced veterinarian, he joined Otago in 1991 when he was appointed director of the Animal Welfare Office. He was also a long-serving board member of the New Zealand Branch of the Australian and New Zealand Council for the Care of Animals in Research and Teaching. He retired from the University in 2013.

She led the Marketing Services team throughout her nearly five years at the University. Her achievements during that time include the introduction of the Only Otago advertising campaign and the University’s sponsorship of The Highlanders rugby franchise.

His professional experience included anaesthetics, intensive care and medical education. As convenor of the Medical School’s Early Learning in Medicine clinical skills programme he made a major contribution to the training of hundreds of medical students in New Zealand.

As Director of the internationally-recognised Christchurch Health and Development Study for more than 40 years, Emeritus Professor Fergusson's work informed policy decisions on subjects as varied as child sexual abuse, youth drug use and abortion. After his retirement form the University in 2015, he served as scientific advisor to the Ministry of Social Development.