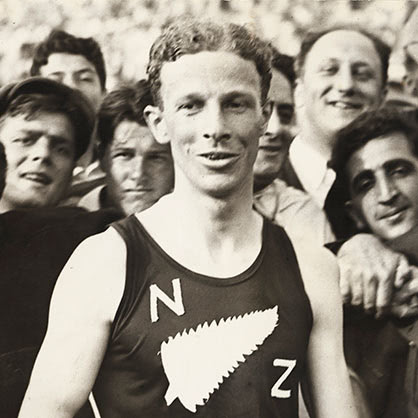 Jack Lovelock is one of New Zealand’s most famous Olympians. After two years studying medicine at Otago, he took up a Rhodes Scholarship in 1931. A promising athlete before leaving New Zealand, while at Oxford he broke the British and world mile records, competed in the 1932 Olympics and won gold at the 1934 Empire Games. He later won the “Mile of the Century” at Princeton and the 1500m event at the 1936 Berlin Olympics, in a dramatic finish which gave New Zealand its first athletics gold medal. He died tragically at the age of 39 after falling beneath a subway train in New York.

Above: Jack Lovelock after his victory in the “Mile of the Century”. Associated Press photograph. Ref: PAColl-8163-31. Alexander Turnbull Library, Wellington, New Zealand. 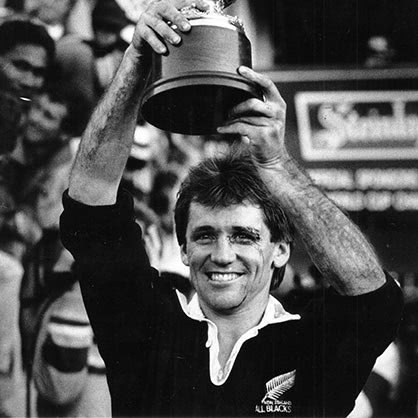 Dr David Kirk is best known for captaining the All Blacks team that won the inaugural Rugby World Cup in 1987. A half-back, he played rugby for the University club while studying medicine at Otago and was first selected for the All Blacks in 1983, playing 34 matches. On retiring from international rugby, he took up a Rhodes Scholarship at Oxford University and subsequently pursued a business career. 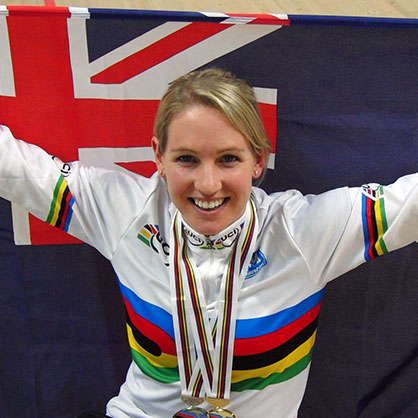 Alison Shanks became a world champion cyclist less than four years after switching from representative netball. Her international successes included a gold medal at the 2010 Delhi Commonwealth Games in the individual pursuit event and world titles at the track cycling world championships in 2009 and 2012.

Sir Graham Henry is arguably one of the most successful rugby coaches of all time. He was head All Blacks’ coach from 2004 to 2011 with a record of 88 wins in 103 tests for a winning percentage of 85.4 per cent. He was IRB International Coach of the Year five times.

An elite track athlete, Lorraine Moller’s international career lasted over 20 years and included a silver medal in the marathon at the 1986 Commonwealth Games and a bronze medal in the marathon at the 1992 Olympic Games. She also won the 1984 Boston Marathon and the Osaka International Ladies Marathon three times. She was the first female to complete four consecutive Olympic marathons.

Dr Farah Palmer is a global women’s rugby icon. She played 35 test matches for the Black Ferns, including three World Cup victories. She represented Otago, Waikato and Manawatu at provincial level: the women’s provincial rugby championship, the Farah Palmer Cup, is named in her honour. She is a member of the New Zealand Rugby Board – the first woman to be appointed to the board in its 125-year history – and was inducted into the IRB Hall of Fame in 2014.

Alpine skier Annelise Coberger achieved an extraordinary feat in 1992, becoming the first Southern Hemisphere athlete to win an Olympic Winter Games medal – silver in the slalom event in the games held at Albertville, France. In recognition of this achievement she was awarded the Halberg Sportsperson of the Year and remained the only Winter Olympic medallist from New Zealand for 26 years.

Paralympic cyclist Phillipa Gray, who is sight and hearing impaired, won three medals at the 2012 Summer Paralympics: gold, silver and bronze. She received the chair’s award from the Royal New Zealand Foundation for the Blind, also becoming an ambassador for Outward Bound and the Spirit of New Zealand. 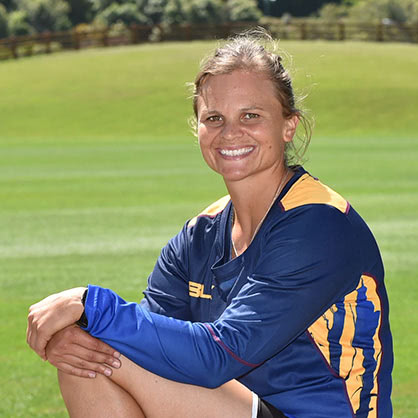 A former New Zealand and professional basketball player, Suzie Bates has also had an outstanding career as a cricketer. A prolific run-scorer, she has been the captain of the White Ferns, ICC ODI and Twenty20 player of the year, and in 2015 was named by Wisden as the leading female cricketer of the year.

New Zealand rower and Olympic medallist Nathan Twaddle and coxless pair partner George Bridgewater won gold at the 2005 World Rowing Championships, silver in 2006 and 2007, and a bronze medal at the 2008 Beijing Summer Olympics. They were named Halberg Team of the Year in 2005.

An outstanding contributor to New Zealand rugby, Anton Oliver captained the All Blacks, Otago and the Highlanders teams, and was the first New Zealander to play 100 games of Super Rugby. Beyond rugby, he studied at Oxford and Cambridge universities, and has been involved in the arts, politics, child health charities and conservation issues.