Documenting the 150-year history of New Zealand’s first university has been more than just a six-year project for historian Dr Ali Clarke. It’s been an odyssey – a pilgrimage through hundreds of untold stories, while carrying with it a responsibility to generations of past staff, students and supporters. 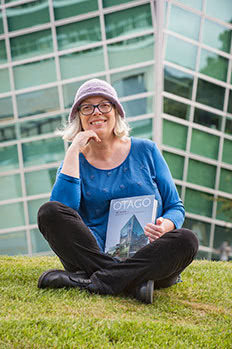 Dr Ali Clarke: I’ve met so many incredible people from all walks of life and I’m enormously grateful to the generosity of those people in sharing their stories.”

It’s 5 July 1871. Two years since the country’s first university – the University of Otago – was established and the doors are officially opened to its first students. Three professors (one to teach Classics and English Language and Literature, one for Mathematics and Natural Philosophy, and the third to cover Philosophy and Political Economy) are in the city and ready to begin lessons.

Located on Princes Street in a building destined to become the Stock Exchange several kilometres from where the University will eventually find its home in 1878, 81 students are enrolled for that first day of classes. Some are as young as 15 and many, according to the writer of the University’s newest history Dr Ali Clarke, are excited, albeit underprepared “with absolutely no idea what they were letting themselves into”.

“It was an astonishing thing to establish a university in 1869,” says Clarke.

“Most people with an interest in tertiary education at the time believed the government should be providing scholarships for people to go back to Europe to study – not establishing something in the colonies. But the people of Otago were determined they were going to do it, so they just went ahead and did it anyway.”

Those original founders – and the city’s forebears – including James Macandrew and Thomas Burns, brought with them staunch Scottish values around the importance of education and the need to make it accessible to all. The University’s motto Sapere Aude – or Dare to be Wise – underwrites what will become a lifelong celebration of learning.

“Anyone could attend,” says Clarke.

“Later they introduced an age limit, but at the beginning it was open to anyone who wanted to seize the opportunity to learn. I think it would have been really exciting for those first students having the opportunity to try things – like chemistry laboratories – that they had never been able to do before.

“To be eligible for a degree, students had to matriculate, but others could still attend classes. For a long time, the University had many more non-matriculating students than matriculating.”

That love of learning – and discovery – has been very much relived in the writing of the history, Otago: 150 Years of New Zealand’s First University. Little-known stories such as the rise and fall of Home Science at Otago, or residential colleges like Helensburgh House – a temporary hall of residence set up between 1984 to 1991 in the former nurses' home at Wakari Hospital – have been unearthed in the new history. It also explores demographic changes in the roll, particularly over the past 50 years, the impact of technology and the University’s other campuses around New Zealand, located in Invercargill, Christchurch and Wellington. Rather than a straight chronological history, the book is structured thematically.

“It has been a fun project to work on, but I did feel the weight of responsibility. It was an enormous relief to finish it, especially knowing the people who have read it are happy with it.

“With such a massive organisation and spanning such a large period of time, you have to be pretty concise. It’s a big book but, even so, you can’t include every great story or every great person.”

Many of those great stories did make it and celebrate the history of an institution filled with life, vibrancy and talent. But this is no rose-tinted history, Clarke says. It also reveals the challenges and changes over Otago’s 150 years.

“It’s not a perfect institution, it’s an organisation made up of humans, so it will never be perfect. It’s a remarkable place – a place of many contrasts. It’s been amazingly innovative and entrepreneurial, but it’s also been very conservative over its 150 years."

"Mostly it’s a place made up of talented people and always has been, from the first professors and the two other staff (the janitor and the secretary) until now. Life-changing research has come out of it and its importance to Dunedin, New Zealand and the rest of the world can’t be overstated.”

An experienced historian and author, Clarke began the project by examining previous histories, launching a blog which helped identify photographs as well as uncover a wealth of anecdotes, memories and information, and establishing a basic structure. Around half of the book focuses on the four academic divisions – Humanities, Sciences, Health Sciences and Commerce – while the remainder looks at other aspects of university life.

“In previous histories, there was not much written about Māori or Pacific students, women, international students or technology, so they all became major focus areas. The University had only just got its first computer within five years of the centenary and, at the time, it didn’t seem very significant. I wanted a structure that would bring out those themes.”

As well as helping to source information, Clarke says the blog played a significant role in testing material as part of her writing process.

One of her favourite blog discoveries was the late Ian Chirnside, who started working at the University in the 1920s as a dental technician. By the time Clarke interviewed him, Chirnside was 106 years old, but still lucid with his memories of his time at Otago. Starting as “the boy” at the tender age of 13, he was given a promotion when his younger brother Alan joined the Dental School and became the new “boy”. The pair later decided they’d like to become dentists, so put themselves through night school to get their secondary education and later qualified as dentists.

After serving in World War Two, Chirnside returned to Dunedin where he began teaching dentistry and eventually retired as an associate professor.

“It was one of those inspiring success stories of the accessibility to education that Otago was founded on. Chirnside came from a large working-class family and no one had ever been to high school before.

Major developments in technology over the past 50 years and the impact on staff, students and the University as a whole are also explored.

Former secretary Shirley Kelly told Clarke about her experience using various typewriters leading up to 1980 when she worked in the Vice-Chancellor’s office, using a “state-of-the-art sensitive-touch electric typewriter” and photocopier machine.

“Though nobody could understand the photocopying machine’s instruction manual, so nothing much has changed there,” Clarke says.

“Kelly went overseas for a year and when she returned was surprised to find the department she was working in were using computer word-processing and the expensive typewriter identical to the one she had been using a year earlier in the VC’s office was sitting unused in a corner. The evolution of technology has been very interesting.”

Says Clarke: “They’d write down all the exams on pieces of paper and spread them all out on the ground and try to work out how best to organise the exam timetable so that no one had two exams at the same time. It would take them two to three weeks to do. But introducing computers revolutionised those tasks.”

Alongside technology, significant differences can also be seen in the face of Otago’s students – with growing numbers of women, Māori, Pacific Island and international students changing roll demographics. In 1986, women took over as the major gender represented on the roll and have remained in that place since. The book also includes information on early Māori students and staff, and the big growth in Māori enrolments in the 21st century.

“The developing consciousness of the University’s place with Māori – something that was very much neglected for a long time, particularly with local iwi – has also been explored in the book,” says Clarke.

“Over recent decades, there have also been much larger numbers of international students coming to Otago and where they are coming from has changed a lot over the years.”

So much so that since 2015 Otago has aimed to recruit some 15 per cent of its 20,000-plus students from overseas, while in 2017 nearly five per cent identified as Pacific Island and Maori made up 11 per cent of EFTS (equivalent full-time students).

In many ways, Clarke says, the University’s history is a reflection of the wider societal changes in the world outside the University. For many years, the now defunct Home Science programme was a hero course of the University of Otago, with student numbers far outweighing other sciences, while an external advisory service (the Home Science Extension Service) went into rural communities, teaching skills such as preserving or cooking.

“One of the last advisory service staff members from the early ’90s said the two things that impacted their service most and essentially replaced what they were doing was talk-back radio and Google.”

But while the student demographic may have changed over the years, the lighter moments and fun associated with the Otago “scarfie” experience are still alive – though the pranks and capping shows of history have been replaced by O-Week celebrations and other student antics.

“There’s a chapter dedicated to student life that explores everything from food to sporting events, clubs, pranks and other social activities. Capping was a really big deal, people used to dress up and put on a procession, and many of the students would carry out various pranks in town.”

Cross-dressing was a big part of the capping show – the Selwyn Ballet, for instance – much of which had its roots from women being excluded from performing during the capping show until 1947 (despite a decision in 1938 by the OUSA student council saying they could take part).

In the 2010s, with gender politics more complex and gender identity more fluid, Clarke says some students have expressed concern about cross-dressing traditions like the Selwyn Ballet, but it remains a popular feature of the show. Other traditions such as the rivalry between students at various residential colleges are also explored: for example, the famous sky rocket wars of the 1970s between Arana and UniCol students.

With so many stories collected over the years of research, Clarke says it has been difficult choosing what makes it to the official history.

“The biggest challenge of all has been organising the material and keeping it to one volume. I’ve been dealing with an enormous wealth of interesting material and have had to leave a lot out. It’s been fascinating looking at some of the programmes that are not so well known and bringing their story together. I knew the book would be used as a reference, so I tried to include a bit about every programme and how it began and when it began.

“So many people have contributed to the project. I’ve met so many incredible people from all walks of life and I’m enormously grateful to the generosity of those people in sharing their stories.”

And after delving into the history of the 150-year-old institution over the best part of six years, Clarke says she is left with an overwhelming sense of the impact of the University of Otago on New Zealand and the world.

“When you look at the big picture, and what the University has achieved around the world, particularly in the Pacific, it is pretty remarkable.

“It’s such a vital asset to the city of Dunedin and contributes so much to the culture of that city. It has also added a lot to New Zealand as a whole, helping grow our country’s education sector and contributing to other cities with its satellite campuses. Through its arts fellowships [the Burns, Mozart and Frances Hodgkins Fellowships] it has also helped shape the careers of generations of artists, musicians and writers. All this, as well as producing life-changing research.”

Copies of Otago: 150 Years of New Zealand’s First University can be obtained from: