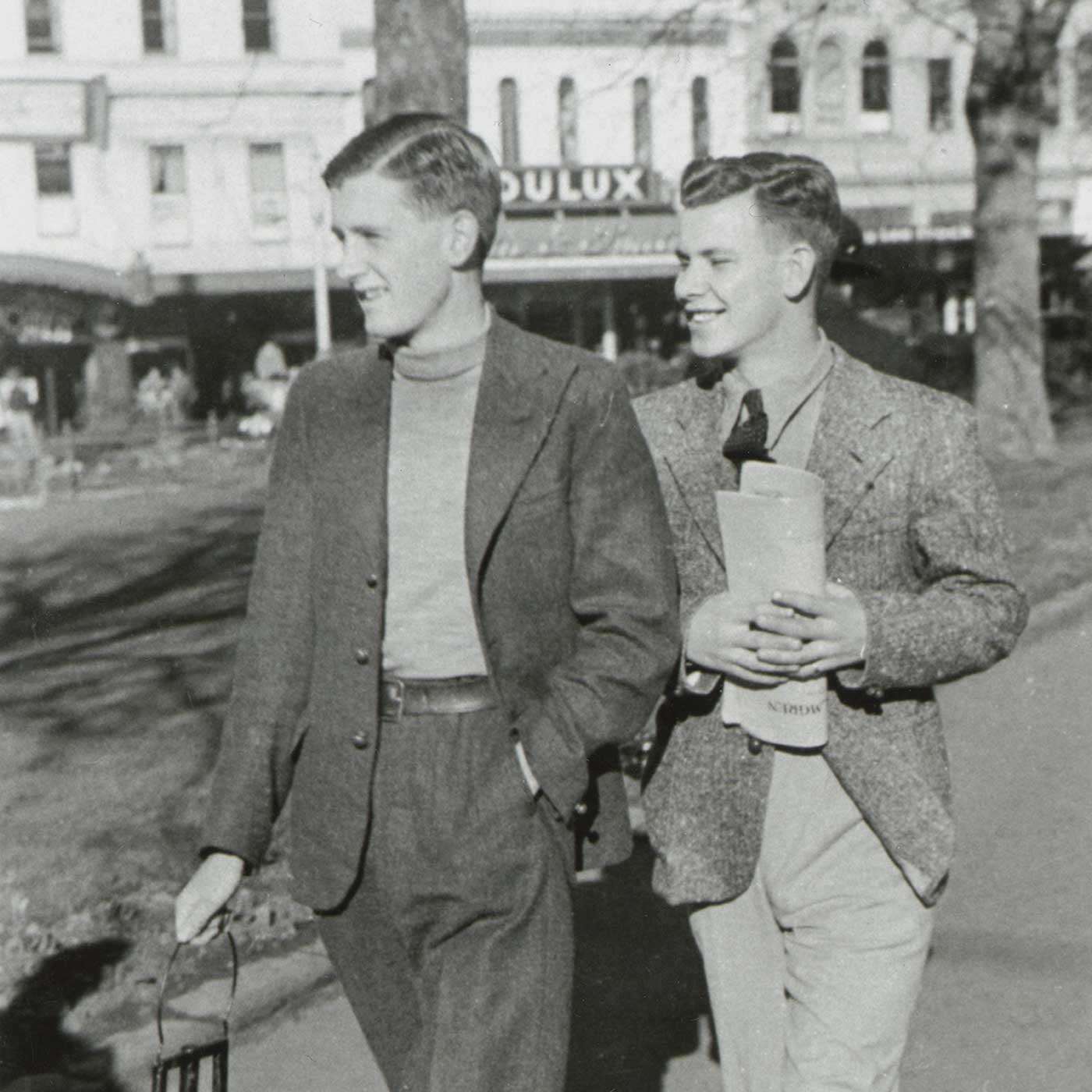 Widely regarded as New Zealand’s foremost artist, Colin McCahon’s artistic career spanned 45 years and a variety of themes, subjects and styles from landscape to figuration to abstraction and the use of painted text. Now, almost 35 years after his death in 1987 (aged 67), Otago’s Hocken Collections celebrates his immense contribution to New Zealand art and art education with an exhibition of his artworks and a notable inscription of his papers into the prestigious UNESCO Memory of the World New Zealand Register

Delve into the Hocken’s extensive collection of Colin and Anne McCahon papers and discover not only a unique insight into the life of New Zealand’s great artist and art educator Colin McCahon and his wife and fellow artist Anne, but also many other significant figures in the art world as well. Across 4.21 linear metres – the largest selection of unpublished material created by the McCahons anywhere in the world – the collection documents the couple’s life and work between 1918 and 1987, from professional correspondence between fellow artists and galleries, business papers and inspiration for artworks, to more personal childhood drawings and writings, a handwritten and illustrated book for his son, or a hand-drawn Christmas card.

Inscribed earlier this year into the UNESCO Memory of the World New Zealand Register – the Hocken’s first inscription for a New Zealand artist ¬– the Colin and Anne McCahon Papers also include papers belonging to McCahon’s mother Ethel McCahon that round the collection further and offer a unique perspective of his childhood.

Much of the collection is made up of personal letters from Colin to Anne (1915-1993) and his family over the years, including letters from a young Colin to his parents and to his many friends, including members of the New Zealand art community: John and Anna Caselberg, Patricia France, Doris Holland (nee Lusk), Ron O’Reilly, Ralph Hotere and Toss Woollaston.

“One of the values of the McCahon papers is their focus on Colin and Anne McCahon, but also the information they contain about other noted New Zealand artists,” says Head Curator Archives Anna Blackman.

“There’s a mixture of the sorts of books and little pictures from childhood that many families would keep, as well as the material that’s clearly related to the development of his art – including a manifesto about the nature of art and the role of the artist that he wrote with John Caselberg.”

Archivist Tom Riley, who put the application together for the Memory of the World inscription, says the collection reveals a different side to the artist than is historically known.

“There are the more unusual – or unexpected – inclusions in the papers,” he says. 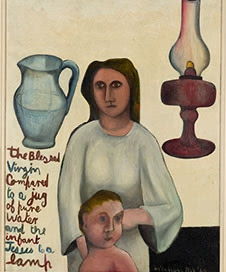 “There is a catalogue from ‘Anything Left-Handed’ in London [McCahon was left-handed], a magazine he made when he was young that includes boyish pranks or past times, and a copy of Mad Magazine.

“A book to McCahon’s son, William, falls into this category too. I’d always thought of McCahon as quite a hard person, a man of his time, but to see such an explicit expression of tenderness is revealing.&rdquo.

“I am William. I live in a little white house beside the sea. In the morning the sun rises up out of the sea and shines in through my bedroom window. In the evening the sun sets behind the walls. In the garden, there is a sunflower, it’s much bigger than I am, and some lettuces and tomatoes and beans my father planted. I found a snail in the garden. At high tide, the sea comes right up to the bay in front of my house. When the tide is out there is a sandy beach to play on.”

So wrote McCahon, capturing the intimate portrayal of his first son William’s early years in a little illustrated book William and his home by the sea, now housed in the collection of papers at the Hocken. The book is one of Riley’s favourites – partly, he says, because it’s a lovely object, but also because it provides a unique insight into the McCahon family life.

Riley says throughout the correspondence from the artist, there is also a sense of “striving and questioning” for which McCahon’s work is better known.

“One of the key themes in his work is that quest for fulfilment and some connection to the unknown, the almighty, and you see that through the correspondence.

“You also get a sense of his closeness of his family, his parents in particular, and his relationship with Anne, which are very personal and intimate and there’s an immediacy to them. For instance, in one letter from Anne: ‘Dearest, your parents have just gone for a walk and I am alone by the fire’ – you feel like you’re sitting there with Anne.”

As well as personal correspondence, the collection includes business letters – from galleries, societies and art dealers, some including financial details and receipts, even the names of people who bought his work, and instructions in McCahon’s hand about the conditions for the sale of his work. Other papers relate to specific projects, including the commission, sketches and photographs for the Waterfall mural he created for the University of Otago Library, as well as correspondence and sketches for his famous Urewera mural.

There are also books and pictures – from preparatory material for various works or designs of the drama productions he was involved in – to the more personal, including a picture created by McCahon and his son William, of William going to school in the rain. A number of Bibles and other religious texts – some of which are annotated – highlight an influence that became significant in his paintings, while a notebook from his trip to America with Anne in 1958 references the things he’s seen, text he’s read and addresses of places he’s visited. An education handbook from 1971 delivers his advice to artists around the preparation of materials and tools – not, as he says, “how to prepare your car for flower power decoration” but the sorts of materials “usually painted on”.

“I think McCahon could be really funny, quite witty and humorous, which is sometimes overlooked, but you see it in his communications,” says Riley.

Head Curator of Hocken Pictures Robyn Notman, says the art collection includes over 200 works by McCahon, ranging from major paintings to sketches. In the last few months two further works by the artist were donated to the collection. One is a drawing, The Three Marys at the Tomb (1947), a gift from Gary Blackman who originally purchased the work as a young man from the artist’s exhibition held at the Dunedin Public Library in 1948. Blackman taught pharmacology for many years at the University of Otago and was actively engaged with the development of the Hocken’s art collection. This recent gift perfectly complements the Hocken’s current holdings of McCahon work, especially those from the artist’s early religious/figurative period, which includes iconic works such as The Virgin and Child compared (1948).

The second recent gift, from former Hocken Pictures Curator and art historian Gordon Brown, is a small painting from the Jump series of the 1970s, a series not previously represented within the Hocken’s collection.

These two gifts are the most recent of an ongoing series of generous and considered donations from the McCahon family, friends and supporters.

Regarding the Hocken as a place of culture with an ongoing role to play in research, McCahon gave works to the Hocken’s collection and ensured his parents John and Ethel’s collection of his work was also bequeathed there.

“The collection has a lot of integrity because the people who formed it, including Rodney Kennedy, Charles Brasch, Patricia France, Michael Hitchings, Gordon Brown and Tim Garrity, were directly connected to McCahon as friends, supporters, advocates, collectors and patrons,” Notman says.

“One of the first McCahons that came in here was a gift from Rodney Kennedy in the ’50s – it was a drawing. After Charles Brasch died in 1973, he left a bequest primarily intended to purchase artworks for the collection. But most of the works here in the collection are gifts.”

An exhibition at the Hocken Gallery – “Colin McCahon: A Constant Flow of Light” – is being held from August 2020 to 1 May 2021 as part of the commemorations of the 100-year anniversary of the birth of Colin McCahon in 1919.

Growing up in Dunedin, McCahon’s artistic foundations were forged in Ōtepoti Dunedin. He attended the Dunedin School of Art (now known as Otago Polytechnic School of Art) from 1937 to 1939.

With a focus on the period from the mid-1930s to mid-1970s, including his early art school works, the exhibition also included some of his most well-known paintings and represented many of the artist’s key ideas, formal aesthetic innovations and influences.

Notman says the title of the exhibition was inspired by the artist’s interest in light and dedicated pursuit of his artistic vision. The text is drawn from the inscription on McCahon’s mural A Waterfall Theme (and variations) (May-August 1966), which was commissioned for the University of Otago’s Central Library (now housed in the Information Services Building) by Brasch and his cousins and fellow arts patrons, Mary, Dora and Esmond de Beer, to enhance the library and create an inspirational space for students.

“I also wanted to associate the artist with what he did while he was here in Dunedin, not only at the Art School, but also emphasise the importance of having a handful of friends and supporters who understand and believe in what you’re trying to do, which is to make new art that expresses your ideas. I think it’s very significant that Dunedin played that role for McCahon.”