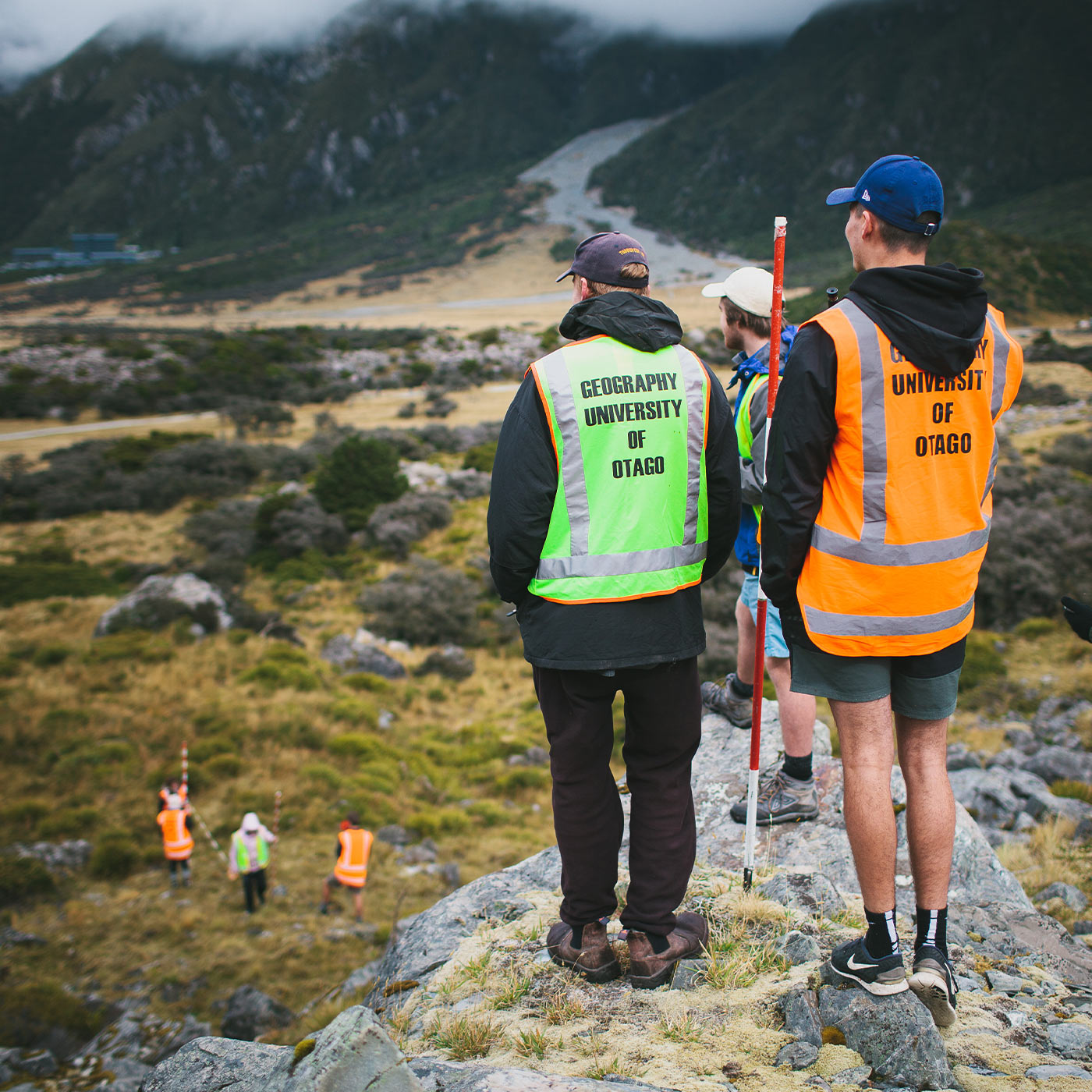 2021 is a milestone year for several Otago subjects. The Archaeology and Social Anthropology programmes are celebrating 100 years at the University, while Geography is celebrating 75 years. The Otago Magazine looks at their histories.

When Geography joined a growing list of University of Otago teaching subjects in 1946, New Zealand was grappling with the practical aspects of a post-WWII rebuild, such as surveying and mapping. Today it has expanded and matured into a School of Geography, grappling with a range of issues shaping the future of the planet and humanity, investigating, amongst others dynamic physical processes, climate change, food security and planning and development challenges.

It would be hard to describe Geography’s beginnings as anything other than modest, with a single staff member, lecturer-in-charge Ben Garnier, and 75 to 80 students. Seventy-five years on, it is a modern, outward-focused department, offering research-based teaching. The School, which includes the Centre for Sustainability has nearly 30 staff – with 117 postgraduate students and 260 undergraduate EFTS.

“We’re the only stand-alone geography unit in a New Zealand university. Elsewhere they are all parts of other schools. We’re quite proud of that.”

The School’s 75th Anniversary Committee has been planning celebrations for the milestone, including producing special publications and holding an event to mark the occasion.

Geography’s development as a subject at Otago owes a lot to the charismatic leadership of key individuals such as Ben Garnier and Ron Lister – the first Professor. Others, such as Blair Fitzharris and Peter Holland, subsequently played key roles in nurturing Geography at Otago.

Research and publishing have gradually evolved to reflect broader changes in society, academia and new understandings of environmental processes. At the same time, staff composition has changed to better reflect both cultural and gender diversity.

Current Head of School, Professor Etienne Nel, says a feature of today’s School of Geography is the degree to which staff are teaching and researching on key cutting-edge global issues.

“These reflect both staff interests and the changing needs of society, focusing on key issues such as climate change, development and planning, indigenous knowledge, resource management and dynamic earth processes.” 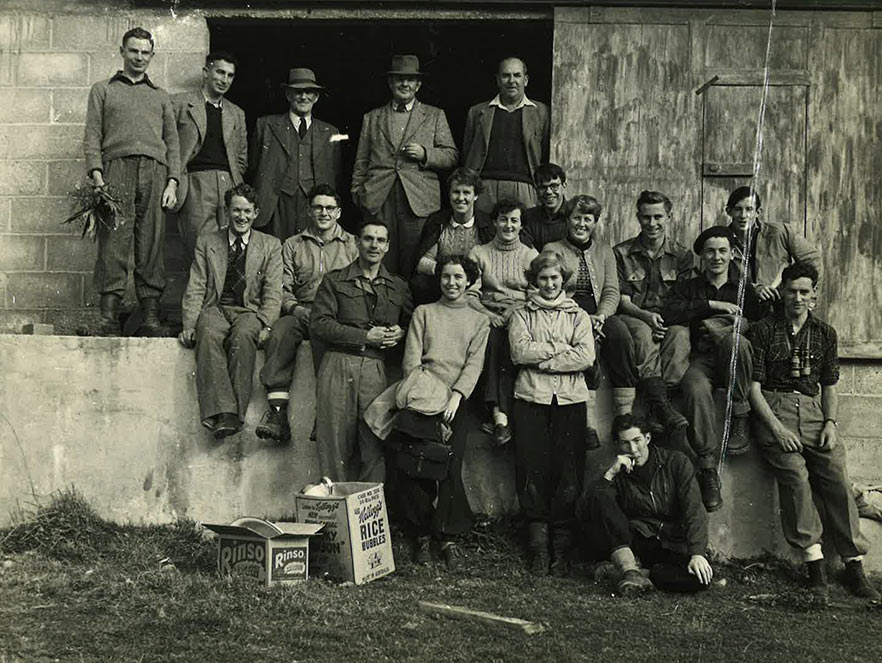 Looking back: A third-year geography fieldtrip to Kaitangata, 1954.

Current holder of the Ron Lister Chair of Geography, Professor Tony Binns says a significant step came just three years ago when the department became the School of Geography. “We’re the only stand-alone geography unit in a New Zealand university. Elsewhere they are all parts of other schools. We’re quite proud of that.”

Rankings improved in the latest PBRF review, while, in international terms, the subject scores well, with Development Studies – which involves geographers as part of an interdisciplinary group of researchers from across the University - ranked number one in New Zealand and 44th in the world.

The School enjoys strong links with multiple departments and research clusters across campus, including the Otago Global Health Institute and the Otago Energy Research Cluster.

This is also reflected in the wide range of research areas postgraduate students are pursuing, such as climate change, adaptation, migration, development issues, community development, planning, and themes in physical geography, ranging from glacier melting and biography to lake-bed sediments and riverine processes to coastal issues.

"One of the highlights of the last 15 years has undoubtably been the setting up of the UniVol programme with Volunteer Service Abroad (VSA), which has given over 100 Otago Geography students the opportunity of working for a year in a range of community-based development projects in Pacific Island countries," says Binns.

Looking ahead, the School of Geography is embracing new and emerging research directions, including a stronger focus on the understanding of, and shifts in, our relationship with the environment, and the associated power relations embedded in global and local environmental change.

Of key significance is the need to draw on matauranga Māori and te ao Māori to engage in decolonising. Engagement with issues that are relevant to the contemporary climate- and pandemic-changed world, hearing and valuing the voices of the marginalised, and promoting an ethical, just and resilient world are also seen as key imperatives.

Many Departments can point to an influential early figure who helped them get established. For Geography that figure was Professor Ron Lister.

“Lister was a legend – a founding father – and very well known in the Dunedin community,” says Professor Tony Binns, who now holds the Ron Lister Chair of Geography, established under the Leading Thinkers programme.

“He fought like hell to get Geography recognised as a department and was a great teacher and a very charismatic figure.”

Lister retired in 1981 and sadly died just a few years later. Binns says that aside from the Chair he holds, there’s a lot of evidence of Lister still in the School, including travel grants and an annual memorial lecture.

There were many other influential staff over the years, for example Professor Blair Fitzharris, known for his work on climate change, and Professor Peter Holland, recognised for his work on environmental histories of New Zealand.

Two publications have been produced to mark the 75th Anniversary.

A book of alumni reflections provides cameos of each decade, from amusing anecdotes to memories of staff and some legendary field trips, including going right down to the Kaitangata mine coalface.

The 11-paper collection is designed to provide a small, but representative, selection of the many significant contributions Otago geographers have made over the decades.

A century of Archaeology and Social Anthropology at Otago

They have changed names several times, had an amicable separation and, if human, would have recently received telegrams from the Queen – the dynamic entities that are Archaeology and Social Anthropology at Otago have many reasons to celebrate their joint centenary this year. 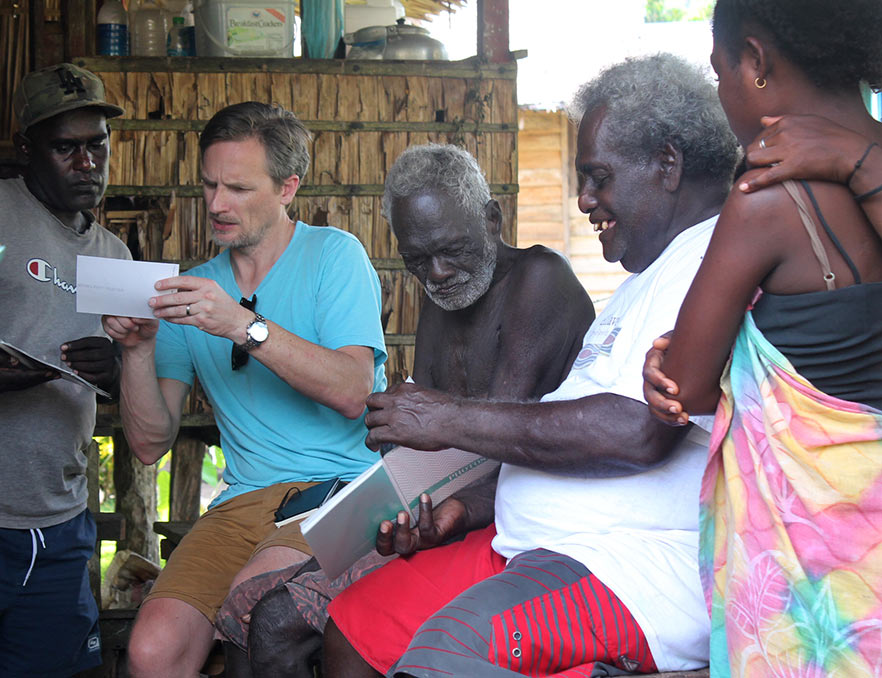 Anthropology was offered from 1921, with Skinner’s physical and cultural anthropology lectures augmented by classes from professors from other disciplines.

After Skinner’s retirement in 1952, the course was offered intermittently by visiting lecturers until Peter Gathercole’s appointment in 1958. Gathercole revived the Stage I course and by the early 1960s, staff numbers had increased, a stand-alone department emerged, and students could major in the subject for the first time.

By 1970 the department had one of the largest first-year courses in the Faculty of Arts, with over 200 students, 12 MA students and five PhD candidates. This trajectory continued, and there have been more than 2,000 Otago Anthropology graduates since the major was first offered.

In 1968 a Chair in Anthropology was announced and there was surprise when Gathercole, who had worked hard to consolidate the department’s position, announced he wouldn’t apply for the position.

In gaining the position, Charles Higham ONZM became the first professor of prehistoric archaeology in Australasia, but this wasn’t a universally popular appointment: after it was announced he’d got the job someone gained access to his office overnight and reduced his chair to kindling.

Although some had reservations about the impact of an archaeologist holding the position, Higham supported social anthropology throughout his tenure.

At the time of his retirement in 2018, Higham was an internationally-recognised archaeologist whose corpus on the prehistory of mainland Southeast Asia included several documentaries about the Angkor civilisation in Cambodia and Northeast Thailand. When awarding him the Mason Durie medal in 2014 the Royal Society Te Apārangi called him “New Zealand’s premier social scientist”.

Another long-serving faculty member, Helen Leach ONZM, started her Otago career as an undergraduate in 1963, completed the department’s first master’s in 1968 and in 1976 became the first woman to gain an archaeology PhD in New Zealand.

Archaeologist Associate Professor Donn Bayard came to Otago in 1970 and taught until 2002, during which time his focus switched from Southeast Asian archaeology to sociolinguists.

“Management of our heritage and archaeological legacy is a growing sustainability issue … helping protect and manage archaeological sites from risks associated with climate change and development is now a priority.”

Anthropologist Erich Kolig was at Otago from 1974 until 2006, and published widely on a range of topics, including Aboriginal religion and Muslims in Aotearoa. Through his work recording sacred sites and native title issues in Australia he was involved in the pivotal Noonkanbah and Rubibi land rights cases.

Wilson came to Otago in 1970 and wrote up findings from ethnographic research in the  Caribbean, Madagascar and Malaysia. He later concentrated on questions around human evolution; Frazer says his publications, such as Man, the Promising Primate, still attract interest.

Frazer, also an Otago undergraduate in the 1960s, returned in 1977 and went on to study the Pacific and Melanesian cultures.

Professor Glenn Summerhayes arrived at Otago in 2005 to take up the Chair vacated by Higham, becoming Head of Department for seven years.

Summerhayes initiated a new phase of research into Papua New Guinea (PNG) and headed a Marsden Grant funded project on Austronesian migrations that began 3,300 years ago and led to the colonisation of Remote Oceania. 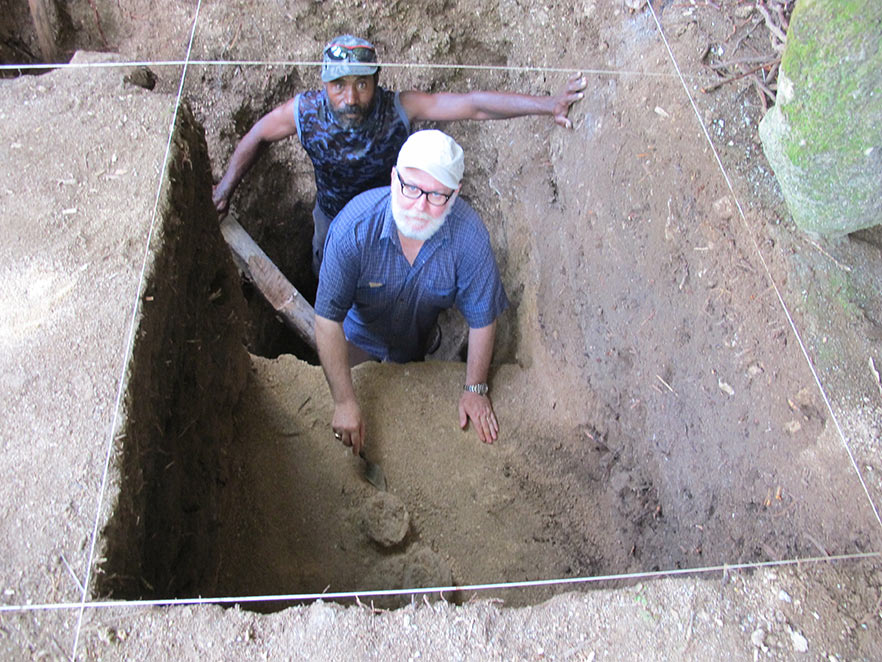 Published in the journal Science, the research brought staff and students into the field,  pushed understandings of humanity’s story in this part of the world back to 50,000 years, and led to relationships with the National Museum and Art Gallery of PNG and the University of PNG.

For his contribution to PNG archaeology, Summerhayes was made an Officer of the Order of Logohu of PNG in the 2014 New Year’s Honours listing.

Summerhayes believes his work complemented that of Higham working in Southeast Asia, Richard Walter in the Solomons, and Ian Barber in New Zealand.

“With other staff, I’ve enjoyed nurturing research students, and I’m pleased to be one of many people from Otago that have improved our understanding of how humans came to this enormous area of the globe, and how they not only survived but established so many fascinating and vibrant cultures.”

Associate Professor Jacqueline Leckie, who taught at Otago for 27 years from 1989, was Head of Department until 2015, when Richard Walter took that role.

The Department also experienced loss in 2015, when respected anthropologist Dr Cyril Schäfer – a researcher and teacher specialising in studies of ritual, the anthropology of religion, and death and dying – passed away suddenly.

In 2019, Archaeology and Social Anthropology became two independent programmes within the newly established School of Social Sciences in the Division of Humanities (they continue to share a single Anthropology major).

Current Archaeology Head of Programme Tim Thomas says the programme’s long tradition of research excellence has kept the programme in the top 50 of the QS global ranking system for years, appearing as high as 28th in the world in 2018.

While ‘archaeology’ evokes images of excavation pits beneath pyramids or leafy jungle canopies, the discipline is far more dynamic.

“Increasingly, research draws on disciplines such as genetics, geology, environmental science and indigenous knowledge systems, and collaborations with Māori, Pasifika and other descendant communities.

“Management of our heritage and archaeological legacy is a growing sustainability issue and while these have always been key, they are taking on an added dimension – helping protect and manage archaeological sites from risks associated with climate change and development is now a priority.” 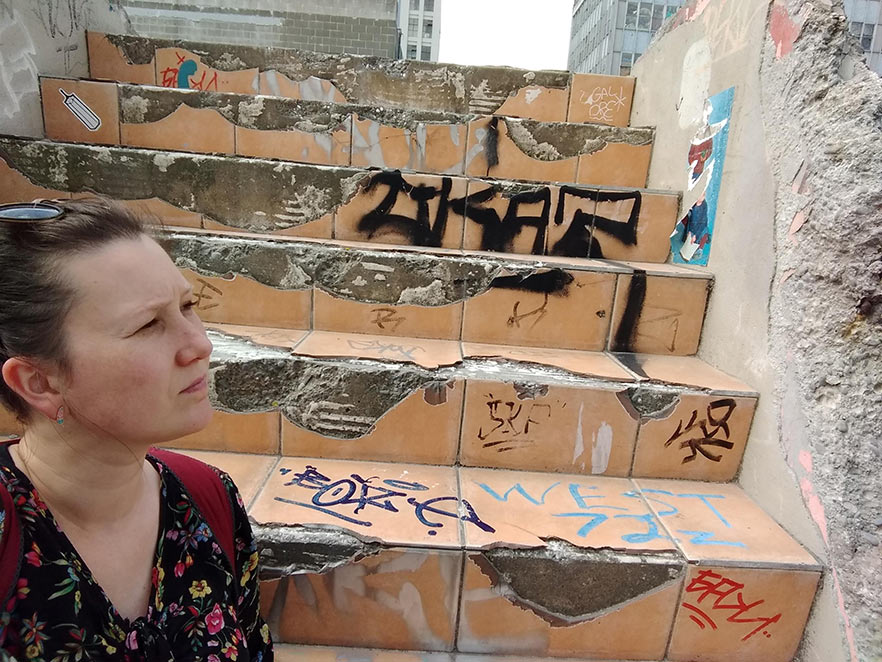 Social Anthropologist Dr Susan Wardell conducts fieldwork in Christchurch on the 10th anniversary of the second Canterbury earthquake for a project on collective memory after trauma.

An emphasis on strong, vocationally focused teaching – and qualifications like the advanced degree in professional heritage management (the MArchP) – has seen graduate students increasingly find work as professional archaeological consultants or in a range of emerging jobs.

Social Anthropology Head of Programme Dr Greg Rawlings says since emerging as a distinct entity in the School of Social Sciences in 2019, a “relatively small number” of programme staff have offered a full suite of papers contributing to the Anthropology major and have successfully recruited a steady number of students year-on-year.

Rawlings says this, combined with its international reputation for research on citizenship, development, ethnohistory, globalisation, social media, medical anthropology and moral reasoning, saw the programme ranked in the top 51 to 100 global QS band this year.

“Our graduates find work in museums, as central or local government policy advisors, in community development, the police, or for non-governmental organisations such as Volunteer Service Abroad. The programme prides itself on fostering critically engaged, cutting-edge, cross-culturally informed research.”