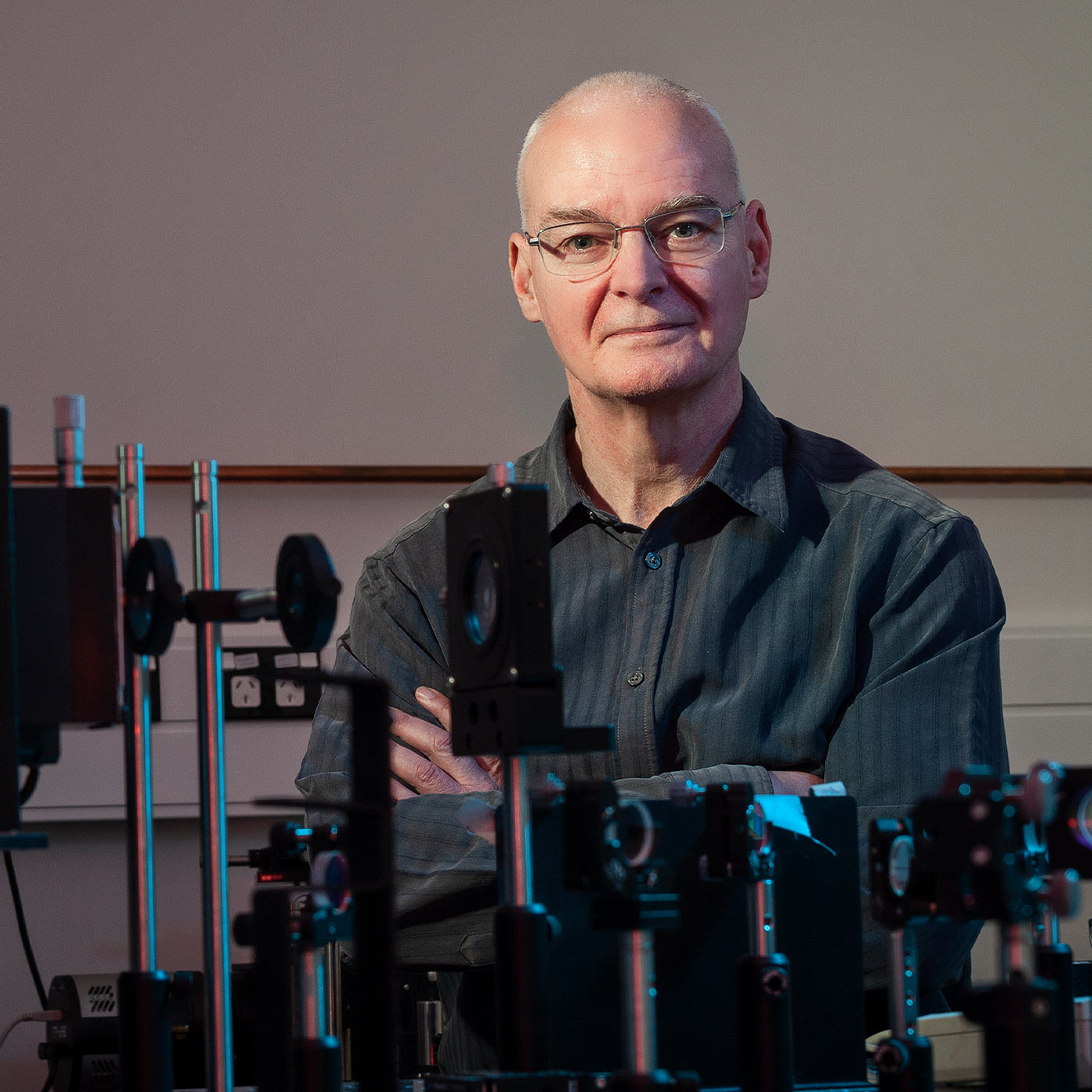 Professor Keith Gordon’s youthful interest in solar energy has helped power a prolific and influential research career. And the winner of the University of Otago’s Distinguished Research Medal for 2021 has no plans to slow down.

Chemistry Professor Keith Gordon describes his students as his colleagues – “they’re just at a different stage of their career” – and is continually discovering new branches of investigation and opportunities to collaborate. It seems fitting that a scientist brimming with such enthusiasm specialises in what are known as “excited states”.

But while “excited states” of matter occur at barely comprehensible speed and scale, Gordon’s research output is less complicated to calculate.

In a career over three decades, during which he has adapted techniques to measure excited states to examine conventional materials more easily, Gordon has published more than 350 papers in scientific journals which have accrued more than 11,000 citations. In recognition of his outstanding work spanning both fundamental and applied research, he has been awarded the University of Otago prestigious Distinguished Research Medal.

Working extensively with researchers in both New Zealand and overseas, his research lies across a range of areas that broadly span photonics as well as new materials for energy use (either as energy generators, photocatalysts and solar cells, or as efficient energy systems such as organic light emitting diodes).

“He has made a huge contribution, based on his unique understanding of the relevant science, to the development of solar cells and enabling compounds for the human harnessing of light energy,” says physicist Garth Carnaby, a former Royal Society Te Apārangi President.

University of Otago Acting Vice-Chancellor Professor Helen Nicholson says Gordon’s publications record speaks for itself, placing him in the top tier of New Zealand researchers. “His work is also distinctive in the direct benefits that his techniques and discoveries have had on end users in New Zealand and elsewhere, across diverse industries involved with food, pharmaceuticals, energy and agriculture. He is endlessly curious and open to collaboration, exhibiting creativity and resourcefulness.”

Keith Gordon grew up in Belfast during the oil shocks of the 1970s and says there was a dawning realisation that fossil fuels were not a sustainable energy source. During his undergraduate degree and PhD at the University of Belfast, he became interested in solar panels, specifically using spectroscopy to measure and improve the minute chemical reactions at the heart of the technology.

“… chemistry seems like an old traditional subject, but actually our opportunity to make a difference and to help society is actually pretty damn good.”

During his PhD he worked to develop new techniques using time-resolved Raman spectroscopy – “we weren't the only people to do it, but we got it to work and that was great” – and was later awarded a Director’s Postdoctoral Fellowship at the Los Alamos National Laboratory before applying for a job at the University of Otago after meeting then Head of the Department of Chemistry Brian Robinson. He moved to Otago in 1993 and, in the decades since, has found fulfilment in both the laboratory and the classroom.

“I would argue that research and teaching go together. I’ve never thought of them as being meaningfully separated. Part of what you teach is because of what you research. We've developed new techniques and some aspects, because they're used so widely, you introduce into your teaching.

“I think what makes a university a university is research, so it’s critically important, but teaching is equally critical to me. If you imagine a rope bound with the twines of research and teaching, that's how I think of it.

He is driven both by a powerful curiosity and a desire to help his students and the wider community: “You really need to publish the work so other people can see it and see what was done. Not to make yourself more important, but to give people an advantage so they can build on your work.”

A recent focus has been using analytical spectroscopy to look under the surface of pills and meat using methods developed to probe solar cells.

“We started worrying about solar cells – that's why we started the experiment. And we ended up using those experiments on pharmaceuticals and now we're going over to doing it with various agricultural products.”

Since his undergraduate days, great strides have been made in the solar power field, largely driven by China which has “fantastic materials scientists” and the development of new techniques such as making solar cells based on plastic which can be printed in the same way as banknotes.

Gordon is pleased to have played a part in the advancements of solar technology and is a strong supporter of its use.

“I’ve advocated for solar cell use in New Zealand for some time and you get the same tropes every single time: ‘It's not sunny enough, it’s not sunny in the right places,’ and so forth. So, let's take an example of a country that's less sunny than ours – Germany. The deployment of solar cells in Germany is sufficient to completely replace our current energy needs fulfilled by oil. You can make dramatic changes in how you use energy. There's no magic required; you just have to deploy the solar cells.”

He stresses to his students that chemistry is all around them, from the “indestructible” blue dye in their pens to the workings of their smartphones.

“Human society is extremely complex and the chemistry that we've done to facilitate the complex society we live in is not done in isolation – and it's not good and it's not bad. It can create bad outcomes, or better outcomes.

“We take an awful lot of materials totally for granted and don’t really appreciate that they are only here because of chemistry. Which is kind of cool because chemistry seems like an old traditional subject, but actually our opportunity to make a difference and to help society is actually pretty damn good.”

Professor Keith Gordon: “I would argue that research and teaching go together. I’ve never thought of them as being meaningfully separated.”
Photo: Alan Dove

At the cornerstone of crisis