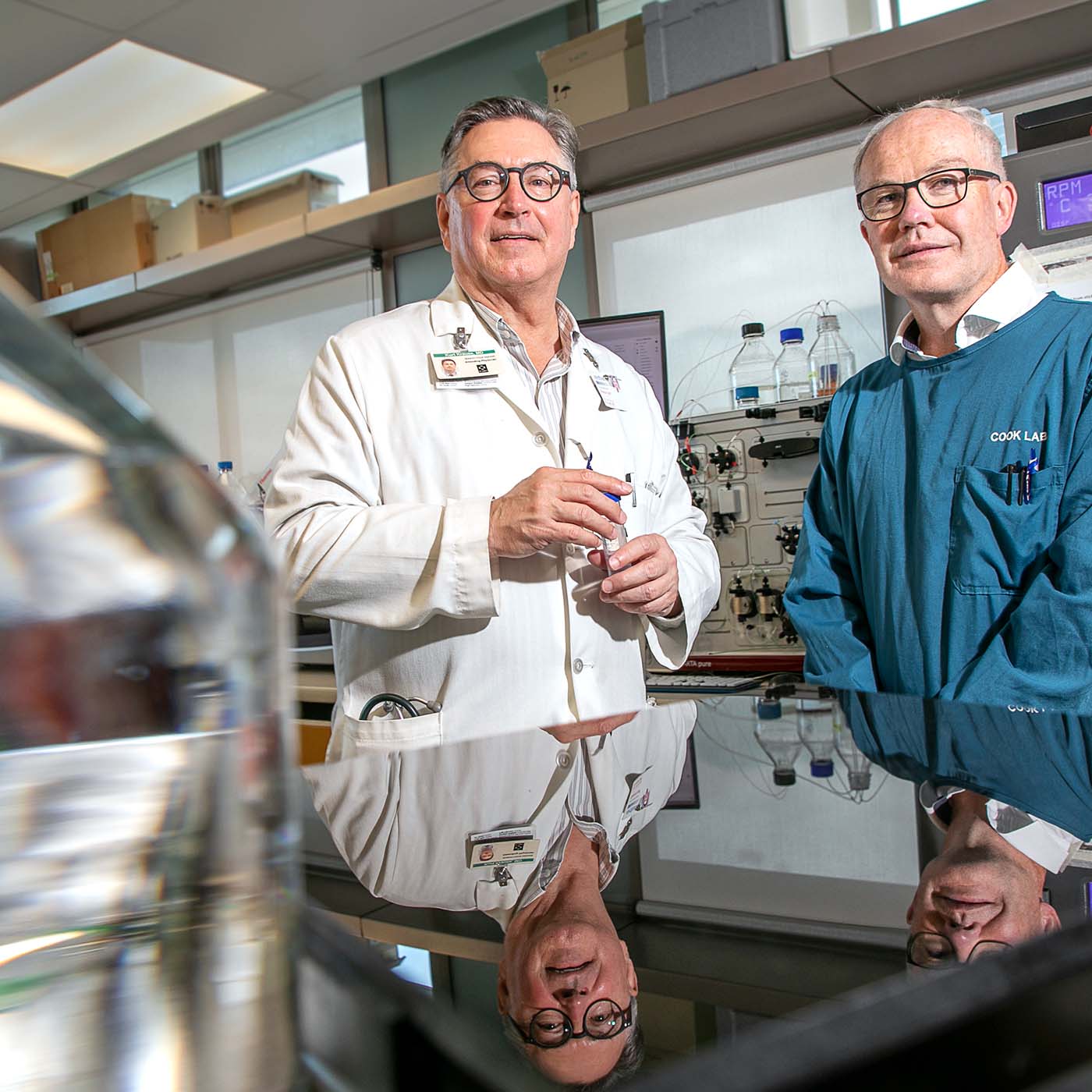 Otago scientists are contributing to cutting-edge research which could transform the treatment of tuberculosis (TB) and eliminate it as one of the world's most prominent infectious diseases.

Kurt Krause and Greg Cook share a dream: To transform the treatment of TB from a six to 18-month protocol of hard-to-tolerate medicines to a short course of antibiotics.

Their target? Bd oxidase, a protein which helps Mycobacterium tuberculosis, the deadly bacteria that causes tuberculosis (TB), to breathe.

The Otago Professors, from Biochemistry, and Microbiology and Immunology respectively, and their team have been working in close collaboration with Nobel laureate Professor Hartmut Michel and Dr Schara Safarian from the Max Planck Institute of Biophysics in Germany to determine the atomic structure of the bd oxidase protein, so new TB drugs can be designed to target it.

“Right now if you get TB you are signed up for six months of therapy,” explains Kraus. “You start out taking four drugs – a tonne of pills that are very hard to tolerate – and continue on two to four medicines for six months. If you happen to have a resistant TB strain you may be taking drugs for 18 months.”

For the two researchers, the holy grail is to be able to treat TB like any other infection with an antibiotic prescription for a week or two.

Krause, who worked in the US as an Infectious Diseases clinician, could see how prevalent TB was in his HIV-infected patients and became involved in the use of X-ray crystallography to determine the structure of potential drug targets in pathogenic microorganisms. Cook, following postdoctoral study overseas on respiratory enzymes, returned to New Zealand in 1998 and became interested in the metabolism and respiration of Mycobacterium tuberculosis realising that New Zealand had a number of groups working on this pathogen. Most of the ongoing TB research in New Zealand was focused on the animal form of the disease caused by Mycobacterium bovis. 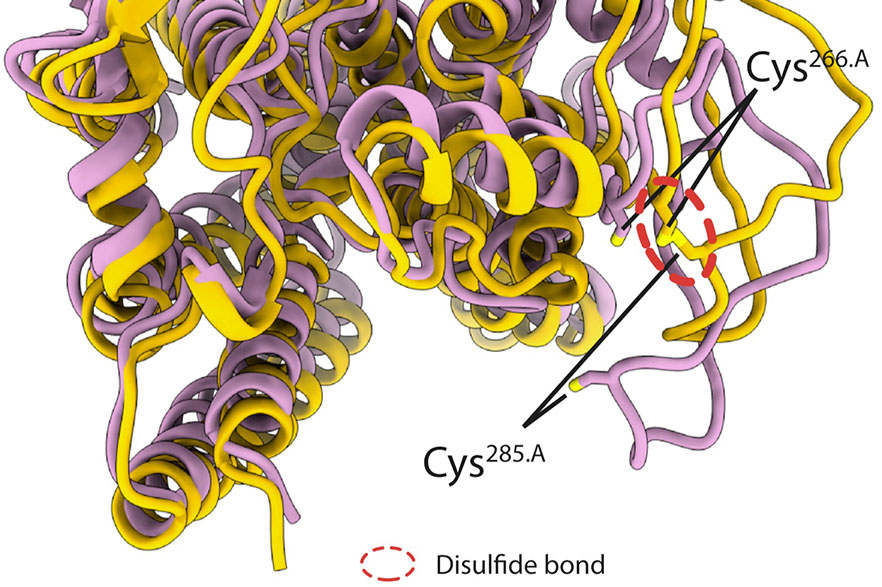 The protein at the heart of the work: bd oxidase, which helps Mycobacterium tuberculosis, the deadly bacteria that causes tuberculosis (TB), to breathe.

Krause and Cook started working together on TB in 2005 and their research was able to progress to another level in 2013 when the University acquired a special lab with physical containment level III capabilities for this research. Since then TB research has grown at the University of Otago with strong international links. Some of this research occurs under the umbrella of the Maurice Wilkins Centre for Molecular Biodiscovery, a Centre of Research Excellence with a focus on TB research.

“That was a eureka moment as current dogma at that time suggested TB could survive in host tissues without oxygen,” says Cook.

“If we can target the two enzymes in TB that together respire with oxygen then we can potentially rapidly cure TB infections, and over time we would have the potential to eradicate TB completely from humans.”

TB uses two proteins to respire with oxygen. One of the proteins proved to be a good target and now there are drugs in clinical testing, but the other protein, bd oxidase, which is being studied at Otago, was uncharacterised in the pathogen. 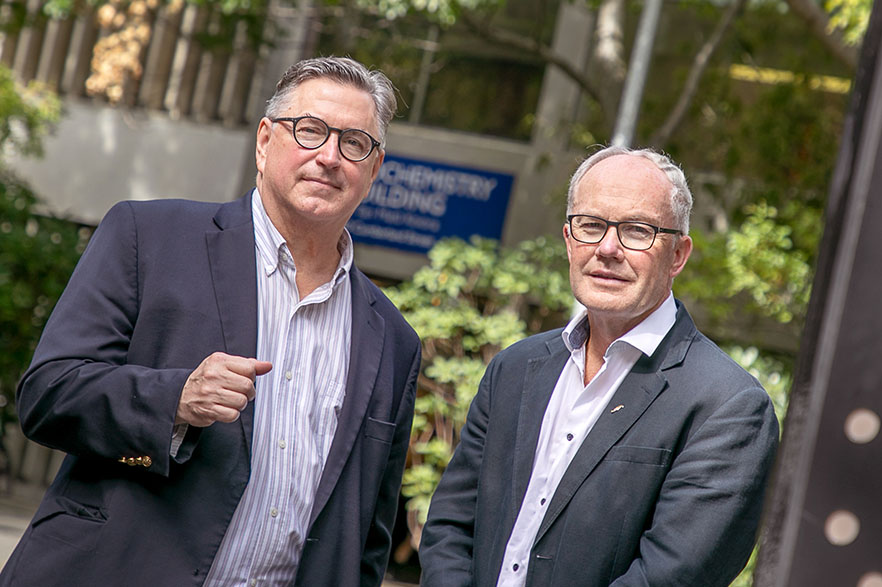 Professor Kurt Krause and Greg Cook: “That’s the beauty of the Marsden Fund. They fund high-risk, curiosity-driven research. It’s difficult to get that funding elsewhere in New Zealand.”

A Marsden grant was obtained in 2016 from the Royal Society Te Apārangi, as well as Royal Society Catalyst Funding, allowing the Otago team to pursue this high priority target. The team worked together to make the protein, test its activity and solve its high-resolution atomic structure to provide a molecular blueprint for discovering inhibitors.

“That’s the beauty of the Marsden Fund. They fund high-risk, curiosity-driven research. It’s difficult to get that funding elsewhere in New Zealand,” says Cook.

"From a clinical perspective, bd oxidase has the potential advantage that you could combine targeting it with targeting other ‘energetic’ targets in TB and rapidly cure TB,” says Kraus. “One of the other beauties of bd oxidase is that it is not found in mammalian cells so blocking it completely is not likely to cause side effects."

That brings the discussion back to their shared holy grail - to be able to treat TB in a week or two, like any other infection.

"If we can target the two enzymes in TB that together respire with oxygen then we can potentially rapidly cure TB infections, and over time we would have the potential to eradicate TB completely from humans,” says Cook.

There is considerable international interest in this new structure and the next step is to work with organic chemists and theoretical chemists to try and locate small molecule inhibitors for this protein and eventually take it through to human studies.

Cook says there is also scope to see this work extended into tackling other bacteria which also have bd oxidase, something that could also open up new lines of research for curing other infectious diseases.