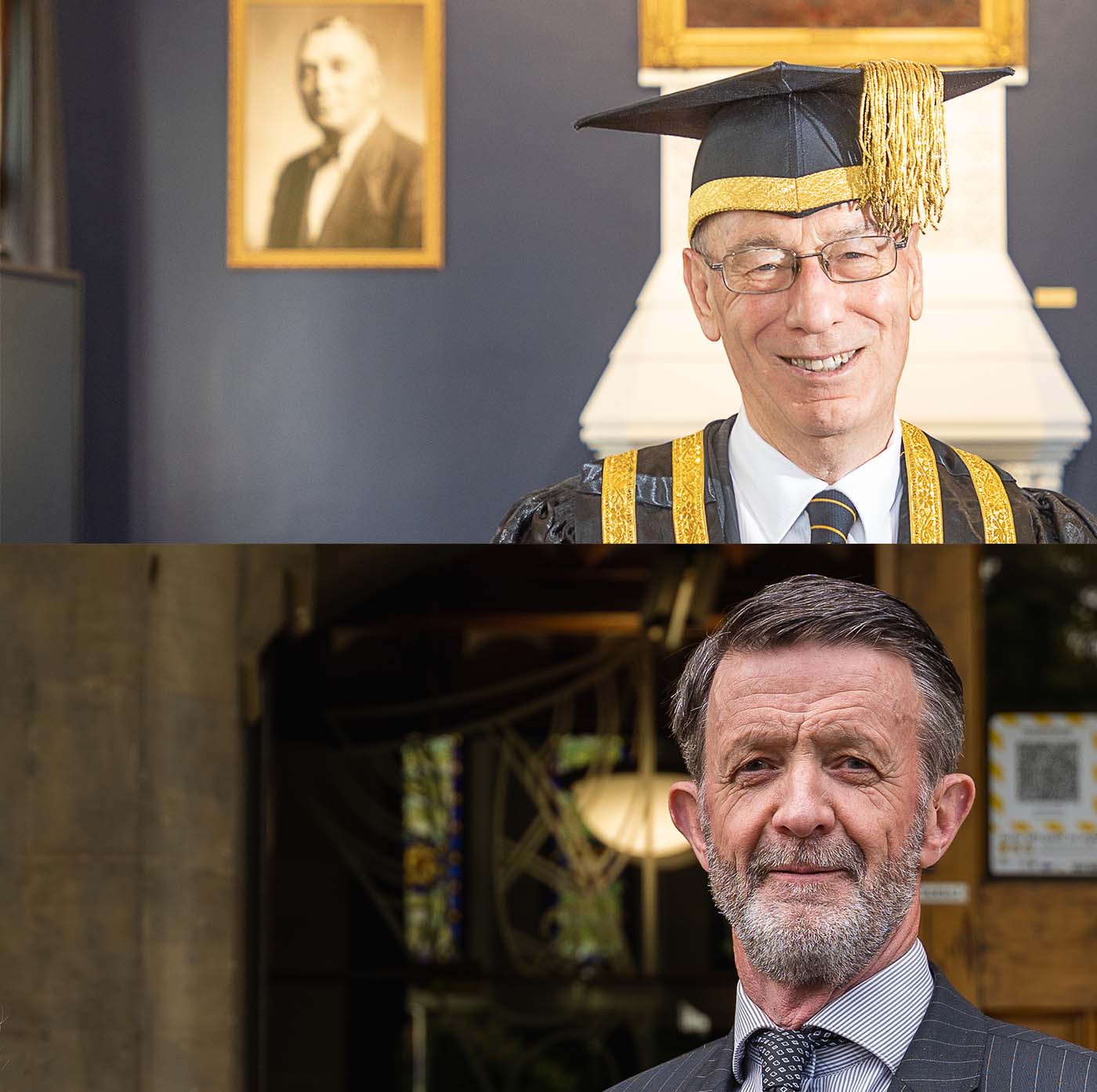 Stephen Higgs comes into the role as Otago's 20th Chancellor, taking the baton from Dr Royden Somerville QC who held the appointment from 2018.

As the Otago Magazine discovers, the pair share a similar story of long links with Otago as graduates and a huge enthusiasm for the University's future.

Co-opted onto the University of Otago Council in 2010, departing Chancellor Dr Royden Somerville QC has enjoyed a long association with the University as a student, graduate, staff member and Council member.

"I have always been very conscious of the significant role it plays as a public university, both nationally and internationally."

Somerville is quick to acknowledge what he describes as the skilled and dedicated Council members he has served with.

"I wish to acknowledge their stewardship and constant diligence to ensure that the resources, finances and infrastructure of the University are maintained and enhanced, and that the strategic vision for the University is developed, while recognising the importance of the wellbeing of our academic and professional staff, and students."

He is also full of praise for the way the University community has tackled the COVID-19 pandemic.

"The University Council has been so proud of the extraordinary and tireless work of our academic and professional staff at all of our campuses, and of their resilience and adaptability during these challenging times. The senior leadership team has ensured that the University has continued to operate in the face of constantly changing circumstances," he says.

"I also wish to acknowledge Professor Harlene Hayne’s leadership as Vice-Chancellor of the University from 2011 to 2021. As a very experienced leader with a passion for Otago she worked assiduously and selflessly for it. She also very effectively applied her skills to promote student wellbeing," he says.

He also thanks Professor Helen Nicholson for her invaluable service as Acting Vice-Chancellor over the 10 months between Professor Hayne's departure and the appointment and arrival of Professor David Murdoch as the University's ninth Vice-Chancellor.

“The best advocates for our University are its staff, students and alumni. The achievements of its staff and graduates provide us with great hope for the future, and sustain the high regard in which the University is held throughout the world.”

"I am confident that Professor Murdoch will be an inspiring and inclusive leader of the University. I wish him all the very best in this important role."

Somerville is proud of initiatives such as becoming the first New Zealand university to commit to the United Nations Sustainable Development Goals 2030.

During his time as Chancellor there has been a busy building programme. In 2021 alone, there was the opening of the refurbished Walsh building at the Faculty of Dentistry, the new Eccles Building, the Performing Arts Building Te Korokoro o te Tūī, and the Auckland Dental Facility.

A particular highlight was his involvement with the 2019 celebrations marking Otago's 150th anniversary.

"It was a lovely coincidence that I was serving as Chancellor during these sesquicentennial celebrations, as my great-great-great grandfather, the Reverend Dr Thomas Burns, was the University’s first Chancellor. I was also proud to be the first Kāi Tahu Chancellor," he says.

"I have always been very conscious of the University’s obligation to honour the principles of te Tiriti o Waitangi, and the need for the University to continue to develop an enduring partnership with Kāi Tahu."

But it is the various interactions with academic and professional staff, students and alumni that Somerville has particularly enjoyed.

"The best advocates for our University are its staff, students and alumni. The achievements of its staff and graduates provide us with great hope for the future, and sustain the high regard in which the University is held throughout the world," he says.

"I wish Stephen Higgs, the incoming Chancellor, all the very best. I am sure that he will find the position as rewarding and stimulating as I have."

In recognition of Somerville’s service, the University conferred on him the special degree of Honorary Doctor of Laws at the first of the recent May graduation ceremonies.

Since graduating with a Commerce degree "a long time ago" Otago's 20th Chancellor, Stephen Higgs, has maintained strong links with the University.

After lecturing in tax, serving on an advisory board for the Business School and acting as a tax advisor for the University, he joined the Council about nine years ago.

"It's a long association and one I have always enjoyed," he says. "For the last 20 years I have been in governance roles on various boards, so those are the skills I bring now, along with a commercial and financial background."

Higgs says he comes into the role at an interesting time, but instead of talking about challenges he prefers terms such as issues and priorities.

"Like all organisations, we have many exciting and important opportunities, so we have to make decisions about our key priorities – we can't do everything," he says.

"We will be a bit financially constrained for a period with limited international students, constrained funding and rising costs, so we are going to need to prioritise where we choose to invest or spend."

In the near term, the ever-changing COVID-19 landscape will be a factor, something he says the senior leadership team has done a fantastic job with.

Higgs enters his new role at the same time as a new Vice-Chancellor comes on board, and he believes Professor David Murdoch's 20-year association with the University will smooth the way.

"David knows the institution well, and I've had nine years on the Council. The senior leadership team alongside him, and the Council alongside me, have significant institutional knowledge, great capability and a shared passion for the University of Otago. I know it will be a very positive relationship."

Higgs acknowledges the efforts of previous Chancellor Dr Royden Somerville QC and Acting Vice-Chancellor Professor Helen Nicholson who he says have served the University and the wider community superbly.

“David knows the institution well, and I've had nine years on the Council. The senior leadership team alongside him, and the Council alongside me, have significant institutional knowledge, great capability and a shared passion for the University of Otago.”

Looking ahead, one of the key drivers will be the Vision 2040 document, which, after widespread consultation, provides a comprehensive view of what the University should look like, and a steer on where some of its priorities should sit.

He says a major plank for Vision 2040 is the University's relationship with Iwi and the desire to genuinely be a Treaty-led organisation at both a governance and operational level.

"Sustainability is another key plank. That's about what we teach, that's about our research, and it's about the University itself achieving carbon zero by 2030. We have the expertise within the University to help us achieve that goal and it will require substantial commitment in time and money."

Higgs says as Chancellor he looks forward to working closely with the Vice-Chancellor on behalf of the Council, and the wider ambassadorial role with the community, staff, students and alumni.