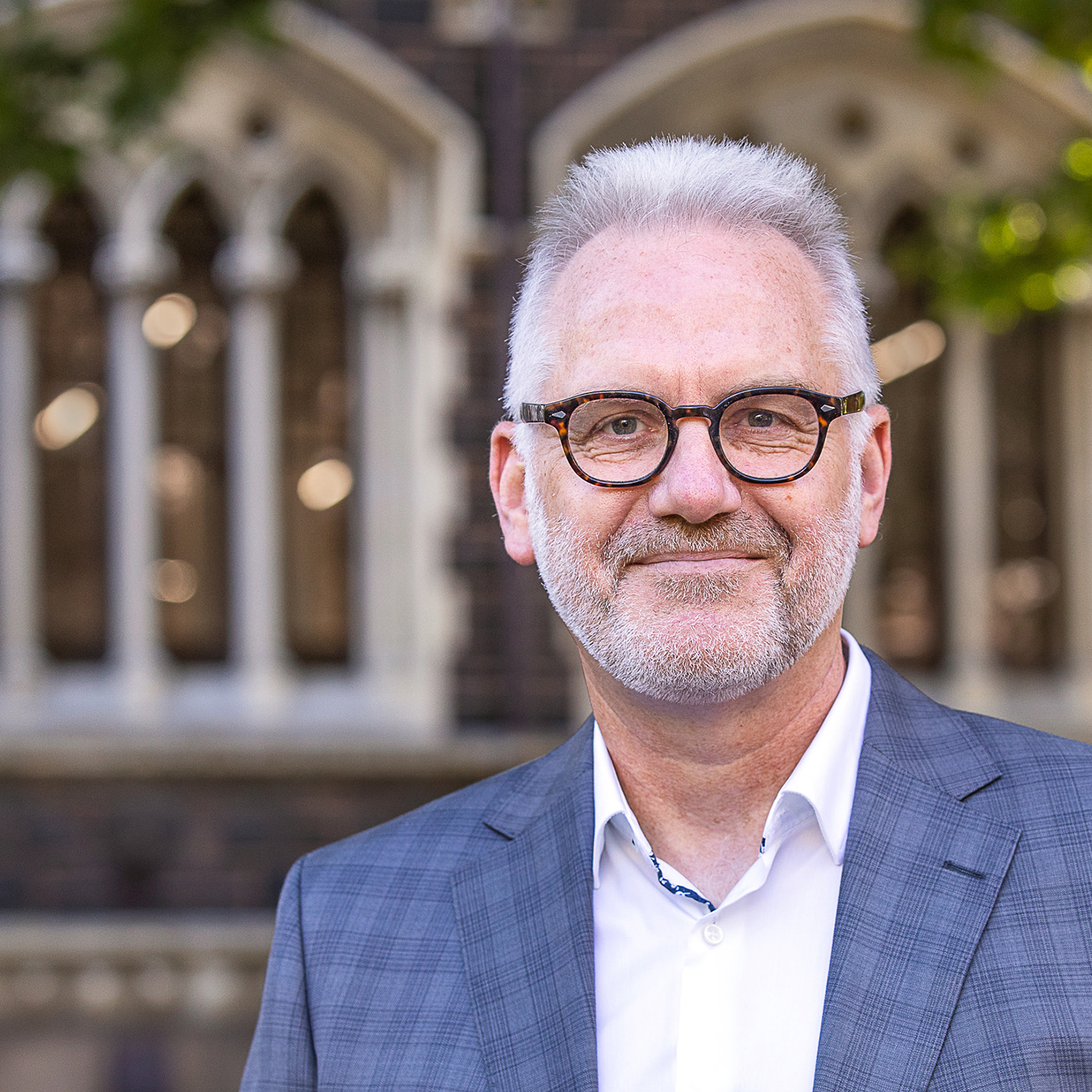 Professor David Murdoch is no stranger to adventure – and now he embarks on a big one, as the University of Otago’s new Vice-Chancellor.

When Professor David Murdoch was appointed as the University of Otago’s new Vice-Chancellor, people were quick to offer well-intentioned advice.

“They told me that the job was a big one and that the weather in Dunedin could be inclement,” he laughs. “They weren’t telling me anything I didn’t already know.”

Murdoch’s move south from being Dean and Head of the University’s Christchurch campus is a kind of homecoming.

His mother came from a long-established Dunedin family, and Murdoch was actually born on campus at Queen Mary Maternity Hospital, which is now Hayward College. He attended Ōpoho School before his family moved to work in Christchurch.

Both parents were teachers and Murdoch believes they instilled strong values into him and his three sisters. “My father was well ahead of his time at the college where he worked, including supporting women to senior roles.”

At school Murdoch was interested in the biological sciences, and was encouraged to study medicine, which he did in Dunedin and Christchurch, graduating in 1985 with an Otago Bachelor of Medicine and Bachelor of Surgery.

He’d met his future wife Lynley Cook at Medical School and the couple decided that their medical elective could be both a learning experience and an adventure. It was to be the first of many.

Murdoch loved mountains, and Cook’s father had been born in India, so they headed off to study in Nepal and India.

“It was my first trip overseas and our first big adventure. It’s where we started learning about how to read the place you were in, acknowledging you were just a guest and the rules might be different. Those early years were deeply formative.”

The experience gave them inspiration for their future, leading to many returns to Nepal, further qualifications in the UK and the USA, and burgeoning careers with international reach. Early exposure to the developing world’s need to counter infectious disease influenced many of Murdoch’s subsequent projects, often improving the health of nations.

“Since I was quite young, I had always been concerned about global and social injustices,” says Murdoch. “Infectious diseases had been brewing as an option as I studied Medicine, but going to Nepal and having to deal with so much preventable disease sealed it for me. We were part of national treatment programmes and witnessed the transformative nature of public health programmes.”

In between doing medical locums in the UK, Murdoch and Cook continued their adventures working in Nepal and he completed a diploma with the Liverpool School of Tropical Medicine and a Master’s degree in Epidemiology at the London School of Hygiene and Tropical Medicine.

Murdoch also befriended Oxford University paediatrician Andy Pollard while planning a Mount Everest expedition. They shared a world view and work ethic and a love of Nepal and mountains, together writing The High Altitude Medicine Handbook, which has become known as one of the best clinical reference books of its kind and a proven life-saver in the mountains.

They didn’t know it at the time, but work they would do together later was to become a life-saver for millions.

On a two-year fellowship at Duke University in North Carolina, Murdoch ran a project in Nepal to discover which infections were causing the most hospital admissions, using personal contacts to further research and solutions. “It was one of many studies that cemented my view that the best research outcomes come about through friendship, respect and true collaboration.”

“They told me that the job was a big one and that the weather in Dunedin could be inclement. They weren’t telling me anything I didn’t already know.”

By 2000 Murdoch and Cook were keen to return home to Christchurch, where he worked with the district health board and she worked as a public health physician.

Murdoch applied for an academic position at Otago, hoping to lecture and to continue work he had started overseas. He was appointed in 2002 to lead the Pathology Department in Christchurch – much to his surprise. “I was a little anxious to start with. I never thought my first university job would be as a head of department.”

He completed a doctorate at Otago and started putting into practice some of the experiences he had had overseas. He worked with colleagues to establish the world’s first national surveillance study of Legionnaires’ disease, discovering that New Zealand had the highest reported incidence globally.

Murdoch’s growing international research reputation soon had him reunited with Oxford’s Professor Andy Pollard to identify causes of pneumonia and meningitis in children in Nepal and the suitability of vaccine schedules.

“It directly led to major policy decisions in the country, including the introduction by the Nepalese government of Haemophilus influenzae type b and pneumococcal vaccines into their national immunisation programme in 2009 and 2015, respectively. This work is an absolute career highlight for me and a source of immense pride. It has had a substantial impact on child health in Nepal and helped established a new generation of young Nepali researchers.” 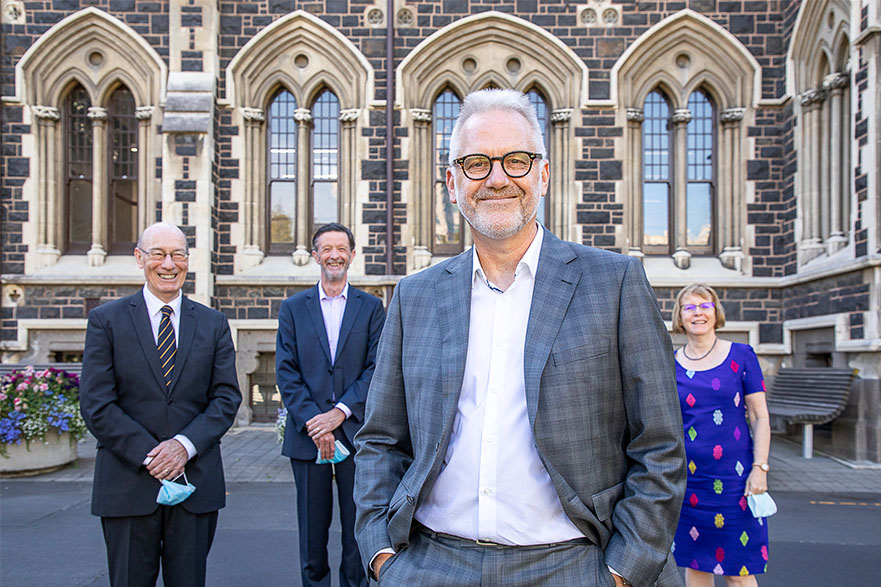 The work involved building strong relationships with the Ministry of Health in Nepal, the local office of the World Health Organization (WHO), and the Global Alliance of Vaccine and Immunisation (GAVI), which provides a mechanism for funding vaccines in poor countries.

It also led to an invitation to join the largest-ever study of childhood pneumonia, funded by the Bill and Melinda Gates Foundation, and further adventures in advancing public health.

“We were approached by the Gates Foundation because pneumonia is the single biggest killer of under five-year-olds globally,” says Murdoch. “I was on the leadership team and we ran it out in parts of Africa and Asia for the best part of 10 years.”

One of Murdoch’s tasks was to set up diagnostic laboratories for the Pneumonia Etiology Research for Child Health (PERCH) study in seven countries in Asia and Africa.

“I travelled so much to study sites that it began to feel as if I was living in parallel worlds – one working with groups in New Zealand and the other with groups who met all over the world. I was privileged to be able to collaborate with so many amazing people from so many places.”

The foundation’s US$41 million funding made all the difference. “We were well funded and could pull in expertise from anywhere. It just illustrates what can be done with appropriate funding and forward thinking.”

In New Zealand Murdoch and Massey University veterinarian Professor Nigel French co-founded One Health Aotearoa, investigating how human health is impacted by environmental change and animal health, as evidenced by the COVID-19 pandemic.

Murdoch is pleased to see the recent government response to One Health Aotearoa’s calls with the Ministry of Business, Innovation and Employment announcing a $36 million investment in an infectious diseases platform to be hosted by the University of Otago and the Institute of Environmental Science and Research.

“This should build on what One Health Aotearoa has been working on for several years,” he says. “We need to strengthen capability in areas such as epidemiology, modelling and outbreak management, and build generic pandemic plans that are flexible enough to respond to all eventualities.

“This requires a culture change and investment so research is regarded as business-as-usual within our public health system, providing the science needed to inform policy, preparedness and best practice.”

Murdoch advised the New Zealand government on COVID-19 and was one of three international specialists invited to Oxford University to oversee clinical trials of the Astra Zeneca vaccine being developed by a team led by his friend and collaborator, Professor Andy Pollard, a world-leading expert in the field and now knighted for his work. 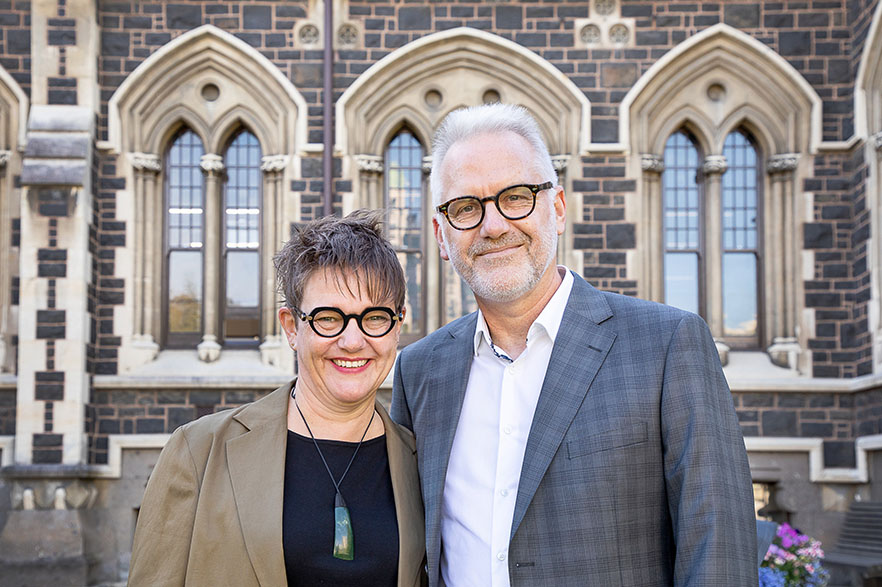 He was made Dean of the University of Otago, Christchurch in 2016 and took up the Vice-Chancellorship early this year.

Murdoch is fully aware that he has taken on the top job at Otago in uncertain times. “The role is absolutely massive,” he says. “But COVID is an immediate challenge and my primary concern is staff and student welfare.

“We need to reconsider how the University delivers education and safe accommodation in light of COVID while providing students with the best University experience possible. All our staff are devoted to that idea. COVID is finally here but there is an end in sight. We are going to get through this.

“I think the University has an important role in addressing major global existential issues like infectious diseases, climate emergency, biodiversity and sustainability.

“There’s a lot of anxiety. We have to do what we need to do. I’ve been in leadership roles in crises before — earthquakes in Kathmandu and Christchurch and the mosque shootings — and so hitting the ground running is not new to me. My key role is to ensure we are prepared for coming events and keep us working together as a team.”

Murdoch is keen to set the right tone for collaboration throughout the University. “Good teamwork is essential as we tackle the challenges of the future. Maintaining good connections and trust are critical to the culture of the University at any time, and we’re facing the toughest time for universities in a generation.

“Even before COVID, the legacy of rising costs and maintaining buildings has meant having to balance the books when our funding has not kept pace with inflation. So we need to remain accountable to the population we serve and maintain good working relationships with the government.

“We also have to keep relevant in a global perspective and that means working towards being a true University of the Pacific, including building the partnership with tangata whenua and tackling sustainability and climate change. Those challenges get me excited.”

Murdoch will continue to follow his own research interests in infectious diseases and epidemiology, although now more as a mentor to younger researchers.

Murdoch and Cook are enjoying being back in Dunedin. “We have a lot of friends here and have been made very welcome. We’re loving getting out into the regions again, both to old haunts and new places we’ve never been.

“We’ve had a lot of adventures in our lives and we thought we had one more big one in us, although we had not expected it to be this. So now we see this experience as both an adventure and a privilege.”