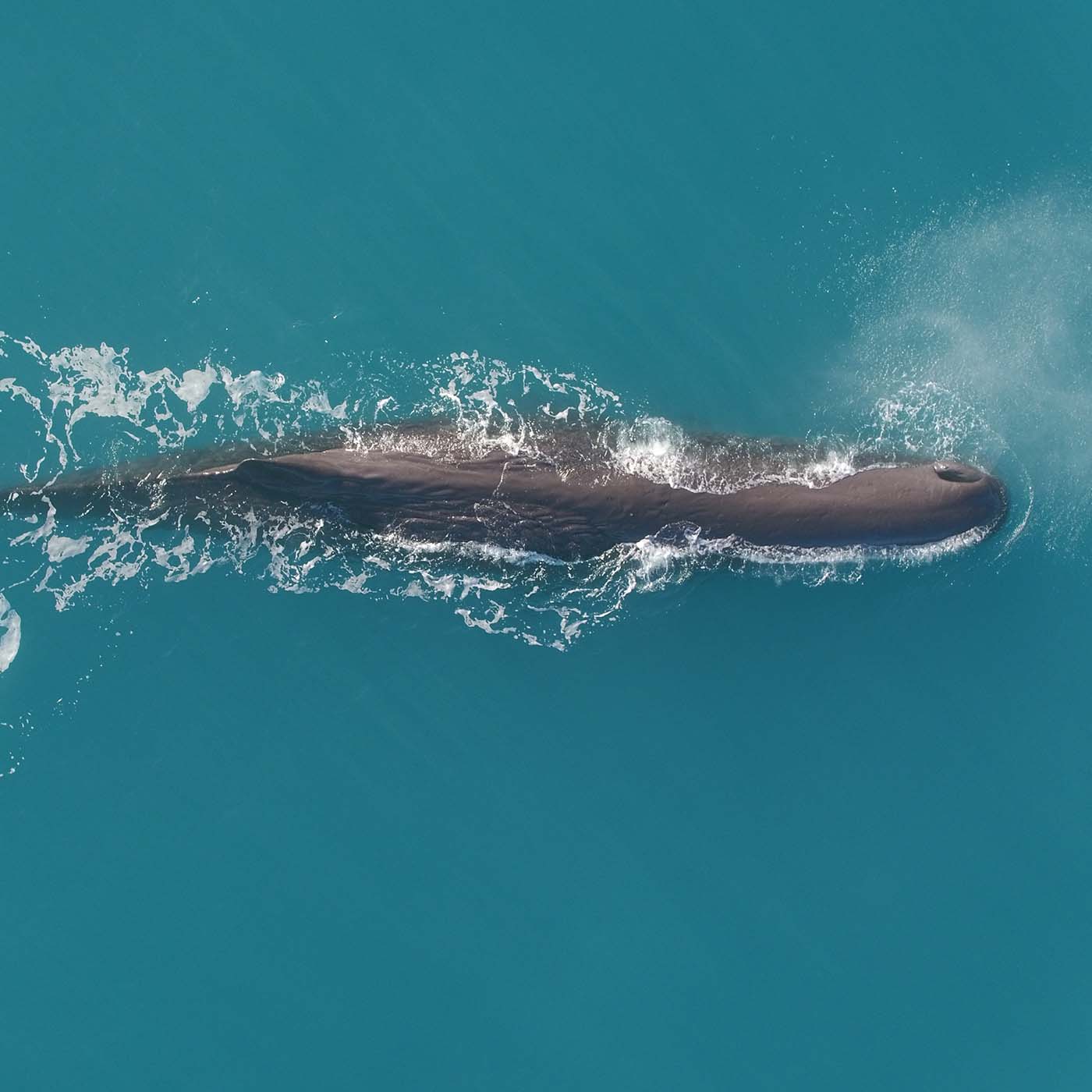 Investigating the Parāoa of the South Pacific

Otago researchers are this year expanding a long-running project on Kaikōura parāoa (sperm whales) to include parāoa populations found in Otago and Northland. With fieldwork already underway, the Otago Magazine takes a look at the mahi.

Aotearoa New Zealand’s unique marine topography, which includes deep submarine canyons and steep continental slopes, makes it one of the few places in the world where parāoa (sperm whales) can be seen close to the coast.

Parāoa are a taonga species that hold cultural significance for Māori and Pacific peoples across Te Moana nui a Kiwa (the Pacific Ocean), and as large, apex predators, they also fill an important role in the marine ecosystem.

Since 1990, Otago’s Marine Megafauna Research Group has been researching the population of parāoa at Kaikōura, and the study is now one of the world’s longest-running studies on cetaceans.

Now this research group, led by Dr Will Rayment of the Department of Marine Science, is expanding this mahi with funding from the new Centre of Research Excellence, Coastal People: Southern Skies, hosted at the University of Otago.

Over the next three years, the Marine Megafauna Research Group will build on the proven research methods, knowledge and relationships made through their mahi in Kaikōura, to investigate the ecology, movements and conservation status of parāoa across other parts of Aotearoa.

“We will take what we have learned and refined at Kaikōura and apply this to two other parāoa populations, in Otago and Northland, where the whales have been consistently seen in recent years,” Rayment says.

“Undertaking systematic surveys in these new locations will enable a more comprehensive outlook on the status of parāoa in Aotearoa, and also help grow knowledge of the connectivity of parāoa around the motu (country), as well as the wider Pacific region.” 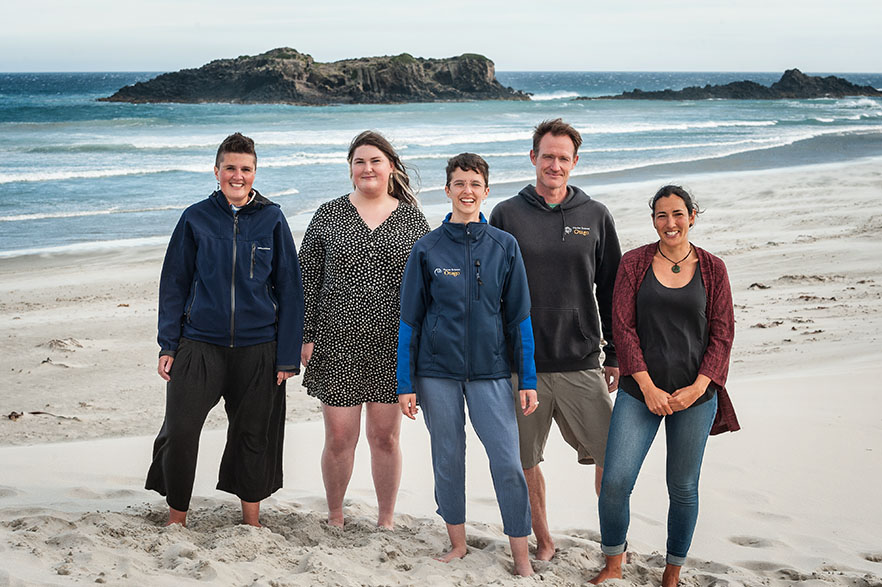 Due to ease of access, research to date has focused on the population of parāoa visiting the Kaikōura Canyon, an extremely productive deep-sea habitat and an important foraging ground for male sperm whales.

Assistant Research Fellow for the new project, Dr Marta Guerra, has been involved with the Kaikōura research for almost 10 years, including her PhD thesis that focused on the foraging ecology of parāoa.

“It didn't take long to become fascinated by these creatures, which are a key part of the submarine canyon ecosystem, and strongly entwined with the human history and lifestyle of Kaikōura,” Guerra says.

“Even over these 10 years, however, which is not that long considering that sperm whales live for more than 50 or 60 years, we have seen some substantial changes in their population, and it has become clear how fluctuations in their abundance can really impact whale-watching tourism in the area.”

Guerra says the number of parāoa seen at Kaikōura is declining, and possible drivers could include climate-mediated changes in local oceanographic conditions, or impacts on other parts of the whales’ range such as their presumed migratory destinations to the north of New Zealand.

“There are still many questions about their population that remain unanswered, and while Kaikōura is certainly an important hotspot for these animals, they are wide ranging nomads who spend much of their time in other regions around the deep moana, following movements which are yet unknown to us.”

The new project will allow the opportunity, for the first time in Aotearoa, to study female and young sperm whales who generally inhabit warmer waters. To assess the movements of individuals in the new sampling locations, the research team will utilise techniques including photo-identification and comparisons of acoustic dialects, in addition to applying genetic methods using state-of-the-art sequencing and genotyping techniques.

Overseeing the genetic analysis of the project is Associate Investigator Dr Alana Alexander (Ngāpuhi: Te Hikutu, Pākehā), a Research Fellow based in the Department of Anatomy.

Alexander explains sequencing technologies have advanced significantly over the past decade, and that it’s now possible to analyse both maternal and paternal genetic markers spread right across the genome, obtained from sloughed skin samples the whales shed naturally as they swim.

“This data will hopefully allow us to get a better sense of the whakapapa of the individual whales in the study, and to understand questions around “Nō hea rātou?” - where are the whales in Aotearoa coming from - and who else in the Pacific are their whanaunga?”

“This data will hopefully allow us to get a better sense of the whakapapa of the individual whales in the study, and to understand questions around “Nō hea rātou?” - where are the whales in Aotearoa coming from - and who else in the Pacific are their whanaunga (relations)?”

Piecing together such connections sits at the core of the project, and Alexander explains her interest in the project also draws parallels to our own existence. “Much like our tupuna (ancestors), parāoa use the moana as a highway to get around. And connections between parāoa in Aotearoa and elsewhere reflect the connections we as humans have in Aotearoa with our Pacific whānau.”

“At the same time, human activity is making the ocean a more difficult place for parāoa and other marine life. So having a greater understanding of where our whales are coming from, and how they are related to each other, will help us understand the threats they face here and on their way to our shores, and help facilitate tiaki (protection) to mitigate these threats.”

Historical and cultural relationships with parāoa will also be central to the expanded research project, which will combine contemporary research and traditional ecological knowledge.

“Our aim is to empower and learn from communities that have important relationships with parāoa, including hearing from tohunga (experts) to better acknowledge other forms of knowledge regarding these whales,” Rayment says.

“By working with communities to interweave mātauranga (Māori knowledge) and Pacific traditional ecological knowledge with insights from this study, we will gain a greater understanding of parāoa and the impacts they are facing, so that traditionally-important connections may persist and thrive into the future.”

Rayment adds that acknowledging the relationships coastal communities have with parāoa will help to promote the physical and spiritual health of those people and their connectedness with te taiao (the environment).

Research collaborations will continue with Whalewatch Kaikōura and the New Zealand Whale & Dolphin Trust, and in Northland new surveys will be undertaken in collaboration with the Far Out Ocean Research Collective. The system of submarine canyons incising the Otago shelf is now regarded as reliable year-round habitat for parāoa, and data collection will be conducted using the University of Otago’s research vessels.

It is intended that research outputs will also support the sustainability of Kaikōura’s whale-watching industry, as well as inform future marine policy in Aotearoa. The study also coincides with the upcoming review on the moratorium on whale watch permits administered by the Department of Conservation.

The Centre’s mission is to connect, understand and restore coastal ecosystems through transformative research and local action, with mauri ora (flourishing wellness) of coastal communities guiding its overall vision.

Jackson acknowledges this parāoa project is a great example of the aspirations of the Centre and is timely given the release and recommendations of the IPCC (Intergovernmental Panel on Climate Change) report.

“This project is leading the way because it integrates both marine and wellbeing components within its research programme, and provides opportunities for the researchers to engage with Indigenous communities to facilitate knowledge exchange and to make a real difference.” 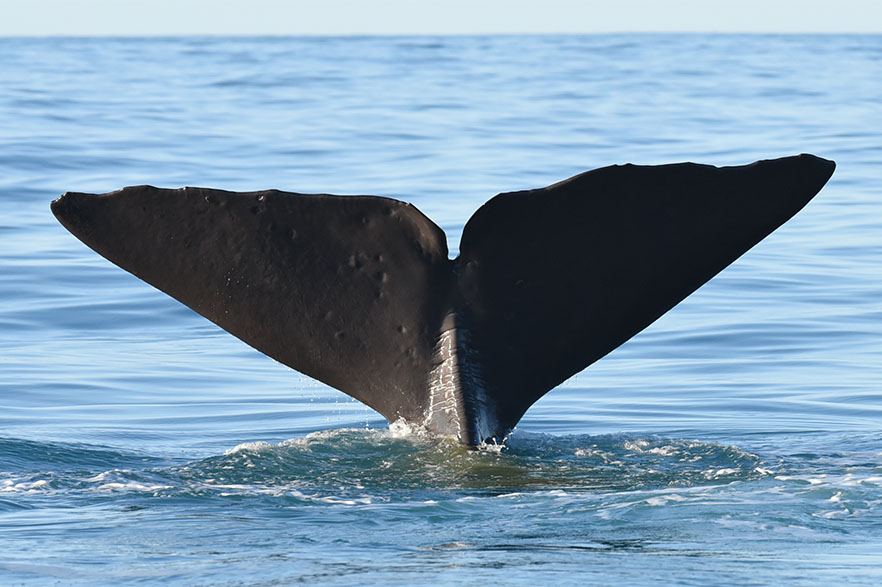 A parāoa at Kaikōura
Photo: Will Rayment

Rayment says the parāoa research is a natural fit for the Centre with its concerns for changing climate, oceanic conditions and connected communities.

“To be given this fantastic opportunity and be supported by the Centre in an inclusive and collaborative process has been really positive,” says Rayment.

“With so many opportunities for research and community engagement, I’m really excited by the potential of this project for making a real difference to this taonga species and the communities parāoa are closely connected to.”

South Pacific Sperm Whales is a citizen science initiative seeking to collect sightings and information about parāoa (sperm whales) around Aotearoa New Zealand and the Pacific Islands. This initiative is part of the research project “Parāoa of the South Pacific” based at the University of Otago, which aims to better understand the connections of parāoa around Aotearoa and its Pacific neighbours, as well as the impacts facing the species in a rapidly changing ocean. Users can log any sperm whale sightings by uploading a photo, time and location to iNaturalist at: inaturalist.org