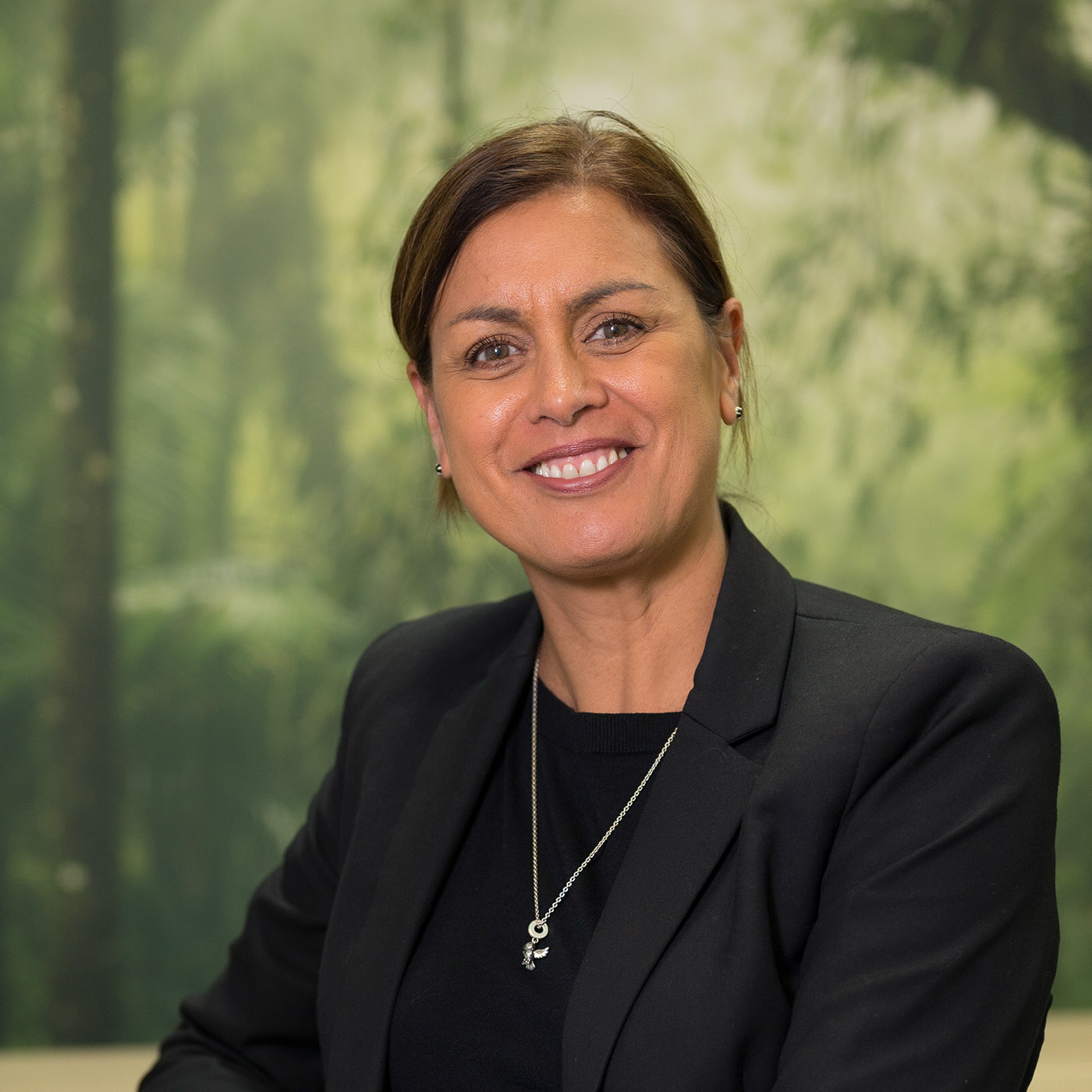 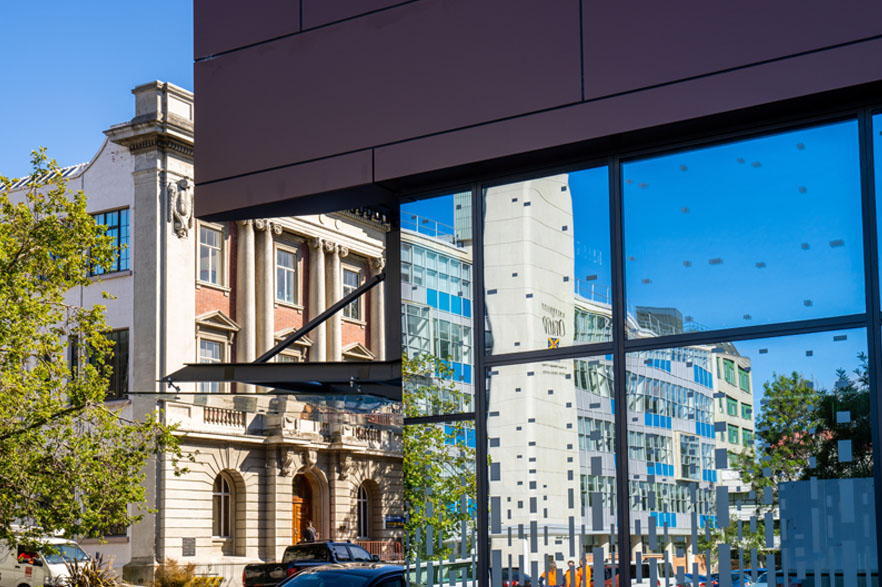 The Faculty of Dentistry redevelopment reflected in the glass of the Eccles Building.
Photo: Dave Bull

He Kāika Toitu, he Kāika ora: The Sustainability Neighbourhood won the Build Back Better category at Australasia’s tertiary sector Green Gown sustainability awards late last year. This initiative is a group of University-owned flats where students are supported to live sustainably and agree to be the focus of sustainability research.

Twenty-three University of Otago projects received a share of $17.2 million in the most recent Marsden Funding round in November. The projects range from Zoology to Philosophy and comprise 17 main projects and six fast-start grants.

Otago researchers were awarded almost $2.9 million in funding from the Health Research Council Career Development Awards in November, including two prestigious Sir Charles Hercus Fellowships. Dr Matthew McNeil (Microbiology and Immunology) and Dr Nina Dickerhof (Pathology and Biomedical Science, Christchurch) both received about $600,000 for their projects. Dr McNeil is examining the global issue of drug-resistant Mycobacterium tuberculosis (TBM), while Dr Dickerhof’s focus is on respiratory illness, both chronic and infections. Theirs were two of 22 successful Otago grants. 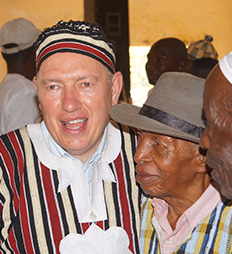 It was fitting that Geography Professor Tony Binns’ last act before retirement late last year was boxing up hundreds of books for donation to the University of Sierra Leone in Freetown.

But this wasn’t the “final act” in his 50-year career working with African communities and institutions; Professor Binns will continue broader research and development projects in Kayima, Sierra Leone.

In recent years, with student and service groups, Binns has raised about $50,000 for a vegetable garden at Kayima’s secondary school, building a nursery school for 200 young children, and refurbishing the community’s health clinic.

For these efforts, he was made Chief Manjawah of Sandor (Master Farmer) and Sahr Kayima (Son of Kayima) of the village in 2014.

His research and development work is driven by a belief that “reducing poverty and improving the quality of life should be a concern for all of us”.

“In many African countries, life expectancy is still in the 50s: 30 years less than in richer countries such as New Zealand. I believe that academic research should have some benefit and tangible outcome for others. With my students and VSA volunteers, I always ask the question: what benefit has your work had for the people with whom you were working?” 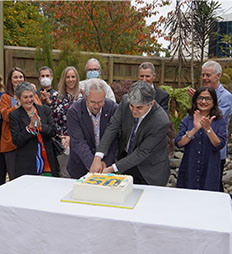 The longitudinal Dunedin Study celebrated its 50th anniversary on 1 April, marking the significant international contribution it has made to the field of human development.

1 April 1972 represents the first birth date of Dunedin-born babies enrolled in the University of Otago’s Dunedin Multidisciplinary Health & Development Study, which over the course of the following year resulted in a total of 1,037 study members.

Since then, the cohort has been assessed regularly, with researchers having published more than 1,400 peer-reviewed journal articles, books and reports on many aspects of human health and development including, but not limited to, behavioural, oral health and respiratory domains.

Some of these significant contributions were recently recognised as among the most important for psychology and social science in the past 100 years, as acknowledged in the Science News 2021 ‘Century of Science’.

The Otago Magazine will take a closer look at this significant milestone in the November edition. 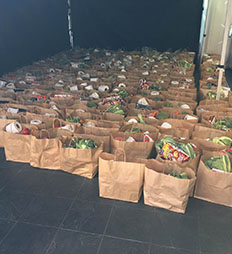 Staff from across the University stepped up to help in March, when the Omicron wave of COVID-19 hit all campuses.

In Dunedin, thousands of students in flats and residential colleges became unwell and needed to isolate. Staff from across the University were re-deployed or volunteered to help staff in the colleges. The Otago University Students’ Association (OUSA), with financial and logistical support from the University, put together and delivered over 4,500 food and care packages to flats in isolation.

Financial support for students was also provided from the University’s Putea Tautoko initiative, which has now distributed close to $6 million in financial aid to students since it was established in 2020.

The University of Otago is now offering a Bachelor of Pharmaceutical Science degree — the only degree of its type in Aotearoa New Zealand.

Offered for the first time this year, Pharmaceutical Science encompasses a broad range of scientific disciplines critical to the discovery and development of new drugs and therapies, and can lead to a career at the forefront of science and technology. 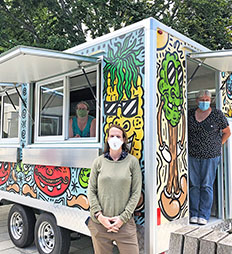 The Department of Nutrition has launched its own food truck, to sell food on campus and in the community.

The brightly painted truck bridges the gap between theory and practice, providing students with a mobile venue to cook food and connect with the public.

A mix of undergraduates studying food service environments and postgraduates covering food service skills will be making use of the truck, which was sourced from Christchurch and painted by Lyttelton artist Jonny Waters.

Any leftover food will be donated to KiwiHarvest, which distributes excess food through the community. 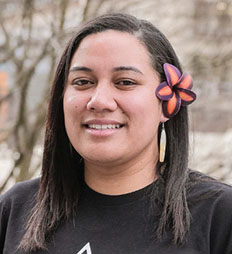 In a milestone moment for Pacific development at the University of Otago, the Otago University Students’ Association (OUSA) has its second president of Pacific descent – directly after having its first.

In 2021 Michaela Waite-Harvey, who is of Fijian-Māori descent became the first OUSA president of Pacific decent. She has this year handed the reins to Melissa Lama, who is of Tongan descent.

Waite-Harvey acknowledges the significance of this.

“People like to minimise firsts and say that it’s tokenistic. I don’t share this opinion. It’s completely necessary to encourage our people to enter new spaces, especially colonial and Pākeha-dominated spaces. It’s a journey towards decolonisation and sharing power.”

Director of Pacific Development, Dr Tasileta Teevale says the legacy of being an OUSA student President at Otago is strong, with past OUSA Presidents going on to greater leadership roles.

Lama says she was inspired by Waite-Harvey’s step up to leadership. 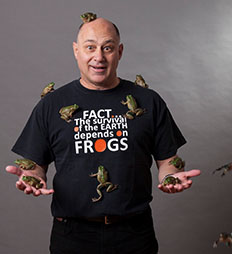 The following University of Otago academics were promoted to the position of professor (effective 1 February 2022):

Distinguished Professor Philippa Howden-Chapman and researchers at the He Kāinga Oranga – Housing and Health Research Programme at the University of Otago, Wellington, have been awarded the 2021 Rutherford Medal, New Zealand’s top research honour, by the Royal Society Te Apārangi for their groundbreaking research into the impact of housing interventions on residents’ health and wellbeing. The medal was awarded to Professor Howden-Chapman and her colleagues, Professor Julian Crane, Associate Professor Michael Keall and Associate Professor Nevil Pierse, as well as the wider research team. The He Kāinga Oranga team has been researching a wide range of housing and health issues for more than 20 years.

Three Otago early-mid career researchers have been awarded Rutherford Discovery Fellowships from the Royal Society Te Apārangi that will support them to accelerate their research careers in Aotearoa: Dr Alana Alexander (Anatomy), Dr Htin Aung (Microbiology and Immunology) and Dr Khoon Lim (Orthopaedic Surgery and Musculoskeletal Medicine, Christchurch). Dr Khoon Lim has also been awarded the European Society for Biomaterials' coveted Jean Leray Award for 2022 – rarely granted to researchers outside Europe – for his work in the area of bio fabrication and 3D bioprinting.

Dr Neil Vallelly (Division of Humanities) has been awarded a prestigious Rutherford Foundation Postdoctoral Fellowship from the Royal Society Te Apārangi. Dr Vallelly will use the Fellowship to examine the relationship between contemporary capitalism - often referred to as neoliberalism - and the rise of migrant detention, especially of asylum seekers, during the past four decades.

Associate Professor Aniruddha Chatterjee (Pathology) and Dr Rajiv Kumar (a medical oncologist in Christchurch and honorary Senior Research Fellow in the Department of Pathology) have won the 2021 Roche Translational Cancer Research Fellowship Award, worth $30,000, for their project on lung cancer.

Associate Professor Sarah Wakes (Mathematics and Statistics), has been made a Fellow of Engineering New Zealand. Associate Professor Wakes expertise is in computational fluid dynamics with a particular research focus on applications to engineering design and wind flow over complex coastal geomorphology.

Professor Michael Baker (Public Health, Wellington) has been awarded the 2021 Cranwell Medal from the New Zealand Association of Scientists. The Cranwell Medal is awarded to a practising scientist for excellence in communicating science to the general public in any area of science or technology.

Emeritus Professor Brett Delahunt (Pathology and Molecular Medicine, Wellington) has been awarded a unique Gold Medal from the New Zealand Society of Pathologists in recognition of his 41 years of service, including his 10 years as President.

Professor Richie Poulton (Psychology) was named in the Clarivate PLC list of Highly Cited Researchers, indicating the significant and broad ongoing influence of the “Dunedin Study” and Professor Poulton’s research into human development, and the Study’s continuing influence on policy makers in New Zealand and overseas.

Trade Services Operations Manager Russ Linwood received the Vice-Chancellor’s Award at the University’s 2021 Professional Staff Awards in recognition of his long and dedicated service and adaptability to the challenges caused by COVID-19. Other awards went to Dave Hood (IT Training and Development Adviser); Chris Smith (Curator of the WD Trotter Anatomy Museum); and Carol Dunstone (Anatomy Technical Manager). The Procurement Office won the 2021 Sustainable Practice Award.

The Otago Business School (OBS) has received reaccreditation from EQUIS for an extended five-year period. EQUIS accreditation is the most comprehensive institutional accreditation system for business and management schools and is acknowledged worldwide. The OBS is one of fewer than 100 business schools worldwide to hold dual EQUIS and AACSB accreditation.

Professor Suzanne Pitama is the new Dean and Head of Campus at the University of Otago, Christchurch. See feature story.

Professor Joanne Baxter has been appointed as the new Dean of the Dunedin School of Medicine. She will take up the role on 1 July 2022. See feature story.

Associate Professor Vivienne Anderson is the new Dean of the University of Otago College of Education.

Professor David Baxter is the new Dean of the Graduate Research School.

Emeritus Professor Peter Innes (Faculty of Dentistry). Joined the University in 1965 as Research Officer, Basic Services, in the Dental School, becoming Lecturer in 1967. He left for 25 years, returning in 1992 to the position of Dean, a role he held until his retirement in 2005.

Erina Hunt (Pathways and English Language Centre). From 2003, she was a committed and excellent teacher whose enthusiasm inspired both students and colleagues.

Dr Moana Jackson, who had strong links with the Faculty of Law and the wider University. Dr Jackson was a world-renowned Māori leader who made an enormous contribution to social justice, decolonisation and uplifting and raising awareness of Māori issues. He was a regular visitor to Te Kaupeka Tātai Ture (The Otago Faculty of Law), and was also a mentor to those in Te Roopū Whai Pūtake, the Māori Law Students Association at Otago. May the legacy of his work continue on, and may the spirit in which he carried himself be an inspiration to us all.