The annual Fulbright-Ngā Pae o te Māramatanga Graduate Award is for a promising New Zealand graduate student to undertake postgraduate study or research at a US institution in the field of indigenous development. The award is valued at up to NZD$57,000 (US$40,000). 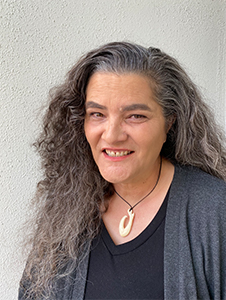 She will undertake her research at Amara, a not-for-profit organisation in Seattle, Washington, and at the National Native American Boarding School Healing Coalition in Minneapolis, Minnesota.

She plans to take up her scholarship in 2022 and spend six months on her research.

Jenni says she was stunned when she heard she had been awarded the scholarship, which was presented in a ceremony in Parliament.

“I had to keep reading the email over and over again to be sure.”

She says her studies are part of a personal journey, as she is an adoptee and her research is about identity of Māori who were adopted in Aotearoa New Zealand.

“It’s about that lifelong search for identity and self, which I have pursued in more formal parameters in terms of my doctorate and thesis.”

The Fulbright will enable her to work further with other organisations internationally which are also exploring the development of an indigenous identity.

She has already been contributing online to work with Amara, which has an adoption initiative project. The Native American Boarding School Healing Coalition provides research and work of a similar thread of connection and reconnection to whakapapa.

“The Fulbright has given me a huge opportunity to work alongside others. It’s an honour to be able to work with people who I greatly admire for their contribution to indigenous identity development,” Jenni says.

Jenni was accepted onto the Master of Indigenous Studies course at Otago in 2009 as a mature student.

“I’ll always be hugely grateful to Otago for giving me an opportunity way back.”

She says she has had “amazing tutelage” from staff in Te Tumu, including Dr Paerau Warbrick and Dr Erica Newman. She has also felt very supported by supervisors Professor Michael Reilly, Associate Professor Karyn Paringatai and Dr Lyn Carter, alongside support from Tofilau Nina Kirifi-Alai at the Pacific Islands Centre and Pearl Matahiki at Te Huka Mātauraka, the University of Otago’s Māori Centre.

“Jenni undertook her Master of Indigenous Studies with us as a distance student. This always presents challenges, but Jenni succeeded in completing her MIndS with Distinction, and carrying on with doctoral studies,” Professor Paterson says.

The Fulbright scholarships were established in the United States (US) in 1946, with New Zealand joining the educational and cultural exchange programme in 1948.