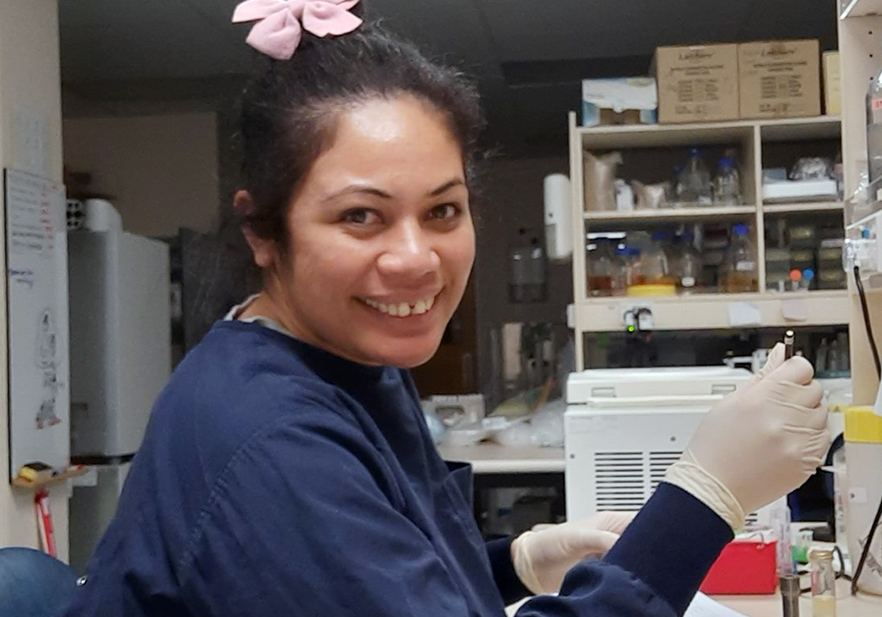 Witnessing anti-biotic resistance in her homeland of Samoa has Lupeoletalaleleiamaima Isaia concerned that we may be returning to a period where people die of simple infections.

Miss Isaia (known to her friends as “Lupe”) is about to finish a PhD research in the Department of Microbiology and Immunology, on antibiotic resistance.

“It’s one of the biggest global health problems”.

She says humanity is “fast approaching an era where most, if not all, antibiotics will no longer be able to treat infections caused by bacteria”.

Her research topic focuses on identifying antibiotic resistance genes (ARGs), the mobile genetic elements (MGE) carrying these genes, and determining the phylogenetic or ancestral relationships between the antibiotic-resistant bacteria found in Samoans living in Samoa and Samoans living in New Zealand.

“Essentially, bacteria are in the process of acquiring ARGs that make them invincible to the antibiotics we have, and these ARGs use a sort of ‘Uber service’, called MGEs, to move from one bacteria to another which essentially results in a whole lot of bacteria equipped with the skills they need to avoid being killed by antibiotics,” Miss Isaia says.

Miss Isaia then uses specialised technology, like whole genome sequencing and bioinformatics, to determine how closely related these antibiotic-resistant bacteria are to other bacteria outside of Samoa, which is almost like viewing the bacteria’s “travel itinerary”.

She was able to identify that there are linkages in the bacteria from Samoans living in Samoa, and bacteria from New Zealand, Fiji and Australia, indicating that antibiotic-resistant bacteria from these countries had all shared a common ancestor.

“It’s like COVID contact tracing, where we’re trying to identify where these bacteria originate, which ward within the Samoan hospitals they are concentrated, and how we can use this information to prevent further spread,” Miss Isaia says.

“Understanding what ARGs are used by bacteria in Samoa is useful in determining the right antibiotic to be used and to optimise patient outcomes.”

Miss Isaia has witnessed a great deal of antibiotic resistance while working in her laboratory in Samoa and is concerned that people could return to the pre-antibiotic period where they would die from simple infections.

She would ultimately like her PhD research to advocate for the rational use of the few effective antibiotics left, to give people a better chance of fighting bacterial infections.

“There’s this picture from the pre-antibiotic era which shows children infected with TB sunbathing, an antiquated treatment of TB, and survival was a matter of luck,” Miss Isaia says.

“This paints a rather grim picture of what life could be like if all antibiotics lose their effectiveness.”

Miss Isaia began her research journey by completing both her bachelor’s and master’s at the University of Sydney in Australia, before leaving study behind to return to the Clinical Laboratory at the Tupua Tamasese Mea’ole Hospital in Samoa where she worked in the Microbiology and Immunology Division for over 10 years.

Her motivation to return to study and attend the University of Otago came after she met Professor Philip Hill, of the Department of Preventive and Social Medicine, and other staff and students of the University who visited her laboratory while conducting research in Samoa.

They inspired her to pursue her PhD and she earned the University of Otago Pacific Doctoral Scholarship which enabled her to come to Dunedin and pursue this.

She shared that her name means “messenger of peace” or “dove of good news” and though she loves what that represents, she finds that it can be a challenging name to live up to.

“I can tell you that I haven’t always been the bringer of good news, as some of my transcripts from undergrad can testify,” Miss Isaia says.

She also shared how she has been dealing with Imposter Syndrome throughout her studies, especially when seeing other students present their data while she felt “stuck in the same place she was a year ago”.

It has been a steep learning curve for her, both academically and spiritually, but it has also been rewarding as she acknowledges all the support she has received from her supervisors, Philip Hill and James Ussher, as well as family and friends.

“COVID has definitely made things harder, not being able to go home, but with God’s amazing grace and the constant encouragement and prayers of my family and friends, I have learnt to trust in Him more and to take life one day at a time.”