Associate Dean (Pacific) steps down after a successful term 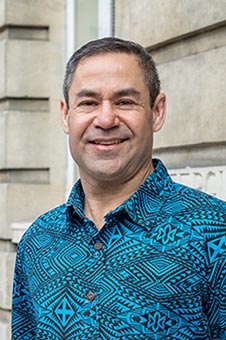 Associate Professor Daryl Schwenke leaves his Associate Dean (Pacific) role satisfied he has contributed to the advancement of Pasifika, but says he could not have done it without the support of his committed team.

Dr Schwenke has been an advocate for Pacific achievement within the School of Biomedical Sciences (BMS) since taking up the role in 2018.

This year’s analytics reveal that grade disparities between Pacific and non-Pacific at the BMS have reduced by approximately 10 per cent under his leadership.

Dr Schwenke attributes these improvements to “an amazing group” that have implemented the Pacific Strategic Framework (PSF) goals within the BMS, which has largely informed their approach to supporting their Pacific students.

Without losing sight of the other goals of the PSF, the BMS decided to focus on “strengthening student recruitment, retention, and outcome”.

“As a school we decided to pour all of our energy into getting alongside our Pacific students,” Dr Schwenke says.

“We wanted to provide focused support so our Pacific students know who we are, and who they can come to if they struggle.”

In order to achieve this, Dr Schwenke and his team gathered data on the academic performance of Pacific and non-Pacific students during the past 10 years to analyse the discrepancies in attainment.

“It was important to break it down by major, subject, paper and year,” he says.

“What emerged was a clear disparity between Pacific and non-Pacific students.”

Dr Schwenke says this disparity may be caused, at least in part, by the generic strategy and style used to teach the curriculum that amplified the differences between Pacific and non-Pacific students.

“We presented our teaching to one class, assuming that they all have the same style of learning, but they are not all the same.

“We needed to move away from the concept of ‘one-shoe-fits-all’ and start to research and uncover more ethnic-specific practices for teaching.”

The BMS also liaises with the Division of Sciences Pacific support network to closely monitor the progress of Pacific students in order to identify those who are struggling from an early stage in the year. From there, Dr Schwenke says that early intervention is key.

“Our team of Pacific representatives from across the BMS and other Divisions meet several times throughout the year.

“If by the middle-end of semester one, we see that certain students are struggling with things like progress tests, we try to offer them extra support.”

Dr Schwenke leaves his position as Associate Dean (Pacific) to focus on other leadership roles within the University.

“I’m passionate about helping our Pacific students, but I’m also coming to the realisation that they need role models in other mainstream leadership positions. It is important that they don’t just see Pacific academics in Pacific roles at the University,” he says.

“For me, taking on other mainstream leadership roles within the University is an opportunity to show that Pasifika can be selected based on merit alone, independent of the Pasifika aspect.”

In addition to his other leadership positions, Dr Schwenke will continue his research on the physiological differences between Pacific and non-Pacific peoples, specialising in cardiovascular health and heart attacks.