History made at Otago with consecutive Pacific student leaders 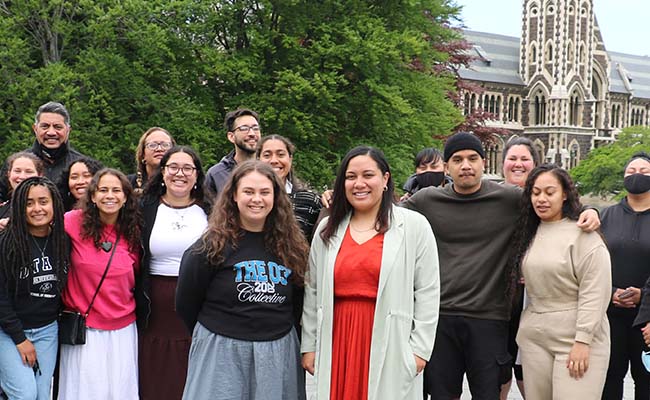 In 2021 the oldest university students’ association in Aotearoa, founded in 1890, elected its first president of Pacific decent. This year, she hands over to another Pasifika president for 2022.

This year’s Otago University Students’ Association (OUSA) president, Michaela Waite-Harvey, who is of Fijian-Māori descent, is delighted to be handing the reins to Melissa Lama, of Tongan descent, who is currently serving as the University of Otago Pacific Island Student Association (UOPISA) president.

Ms Lama was elected by students to become their OUSA President in 2022 and will become the second student of Pacific descent in history to serve as OUSA president.

Director of Pacific Development, Dr Tasileta Teevale acknowledges the Pacific student's leadership as a milestone moment for Pacific development at the University of Otago.

Dr Teevale says the legacy of being an OUSA student president at Otago is strong with past OUSA Presidents going on to greater leadership roles.

Ms Lama has several areas she would like to support in her new capacity, including the Queer Space, Te Roopū Māori, and the Disabilities Information and Support Office.

“I want to add to what has come before me, Michaela’s work in particular. It just makes me want to keep up her work of inclusivity.

“It’s an opportunity to share my point of difference, and what I can contribute to the work that has already been done,” Ms Lama says.

She was inspired by Ms Waite-Harvey’s step up to leadership in 2021 and admits she may not have had the confidence to stand herself otherwise.

“It’s good that we’re encouraging more of us to get into these spaces.”

Ms Waite-Harvey understands the significance of her status as the first OUSA president from the Pacific.

“It’s completely necessary to encourage our people to enter new spaces, especially colonial and Pākeha-dominated spaces. It’s an association for all students.”

“It’s a journey towards decolonisation and sharing power,” she says.

Ms Lama commends her predecessor on her successful tenure and the work she has done in the Pacific space, particularly the Memorandum of Understanding between OUSA and UOPISA.

As well as focusing on her studies and leading UOPISA, Ms Lama is involved in many community-based projects, including co-chairing the national Tongan youth COVID‑19 Response Group.

“Our committee has been tasked with drawing up a youth strategy around engagement.

“In this group I am joined by medical doctors, professionals, clinicians, and community church leaders. I bring young people’s voices to the table,” she says.

During her time in Dunedin, Ms Lama has felt well supported by the different Pacific communities of which she is a part.

“I want to take these communities with me,” she says.

“I think you’ll be seeing them at some of our events next year. They always turn up to show their support, which is fantastic. They should have ownership over whatever I achieve in this role.

“The members of these communities show their love and support to students who aren’t even their kids. These groups help retain our Pacific students at the University.”

While Ms Lama is brimming with ideas for next year, she is looking forward to working with her OUSA team.

“I want to know where they feel the focus needs to be and how I can best support them.

“I want to be a relatable president. One that they feel comfortable enough to be able to hold accountable and have conversations with and I want our students to feel that if they come to us, they will be heard.”

Meanwhile, Ms Waite-Harvey is reflecting on what she considers a successful term.

Her decision to stand as OUSA’s first Pasifika President in 2020 stemmed from her passion for leadership.

“As it got closer to the elections, I realised that I had ideas and I could see myself as someone who could lead other student leaders.

“OUSA used to be a male-dominated space so being able to guide other female leaders and other women of colour was something that I was very interested in.”

During the year, she wasted no time making effective decisions about pressing matters.

“I’ve mastered the art of reducing executive meetings down. When I was on the exec last year, our meetings would go on for an hour and a half every week. I think I’ve cut that down to 20 minutes.”

Being a member of the queer community herself, she is particularly proud of her contributions to establishing the Queer Space on Campus.

“It’s the tangible initiatives that I am the proudest of. They involve a lot of actual mahi like painting walls and moving furniture.

“If you don’t do those tangible initiatives, it can kind of feel like an admin job where you’re just sending emails and that isn’t really fulfilling in a representative lobbyist role.”

Life will still be incredibly busy for Ms Waite-Harvey next year. She is studying law and classics at Otago, while undertaking a clerkship at Anderson Lloyd working in the litigation team part-time.

She has some advice for her successor.

“I think specifically for women of colour in the role, it’s very important to be protective of yourself and be firm in your beliefs and opinions so that you don’t get sidelined, minimised or criticised.

“And make sure you have the right support around you. I lean on a lot of people to make sure that I’m double-checking the decisions I’m making. In this role you have to ensure that your decision-making reflects the collective voice.”

At a socially distanced and limited-in-person event held in their honour, both women were acknowledged by Pacific staff leaders and dedicated Pacific student support staff who offered them words of advice and encouragement as they progress into the new year.