When Faumuina Professor Fa’afetai Sopoaga learned she had made the New Year’s Honours List, she dedicated it to her parents, her Samoan upbringing and the colleagues she works alongside. 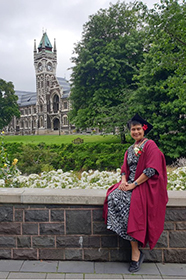 Professor Sopoaga has been named as a Companion of the Order of Merit in the 2022 New Year’s Honours List for services to Pacific health and tertiary education.

“To me this is a reflection of our collective contribution as Pacific peoples in Aotearoa New Zealand,” she says.

“It signals that we are engaged and contributing positively to the fabric of New Zealand society.”

But she says it is also reflection on how her parents had instilled in her the importance of education and contributing to the wellbeing of others.

Obtaining a scholarship was necessary if Professor Sopoaga was to travel overseas for training beyond High School, as her parents could not afford international fees for higher education.

“My aim was to go overseas for further studies, so I worked hard. I wanted to help my family, the community and others,” she says.

“To me, education and service are interlinked.”

Her career has been devoted to improving Pacific health and education outcomes through capacity building in the tertiary sector - the focus of her doctoral studies, which she completed last year.

Professor Sopoaga had intended to complete her doctoral thesis on sabbatical in 2019, but this coincided with her work supporting the coordination of the Samoan Doctors Worldwide Volunteers Group during the measles outbreak in Samoa.

“Sometimes you have to put things on hold to focus on what is more important,” she says.

Professor Sopoaga and her colleagues Leota Dr Lisi Petaia and Dr Debbie Ryan mobilised the largest number of Samoan doctors from New Zealand and Australia to provide support for the local efforts in Samoa.

In 2009 Professor Sopoaga became the inaugural Associate Dean (Pacific) at the University of Otago.

It was in this role that she was able to build Pacific capacity in the University’s health professional programmes and enhance the training of Pacific students interested in a career in health. She acknowledges the ongoing support from the New Zealand Ministry of Health and the Ministry of Pacific Peoples in these efforts.

She is a public health and primary care physician and has worked as a GP locum around the Otago region.

She was also awarded the Prime Minister’s Supreme Award for Excellence in Tertiary Teaching in 2018.

Last year, she became the first Pacific woman promoted to Professor at the University of Otago, and was the first medical doctor of Pacific descent in Australasia to be promoted to a Professorial role.

Professor Sopoaga is currently the director of Va’a o Tautai, a team that supports Pacific academic excellence within the Division of Health Sciences at Otago University.

“I’m able to do what I do because of my amazing team. I am also sincerely grateful for the excellent support from the University leaders”.

“I realised early on that I couldn’t do this by myself. I was passionate, but it’s like being in a waka; if you’re paddling by yourself, you’re not going to get very far. Working in a team is always better.

“We can achieve better health and education outcomes through a collective approach,” she says.

Professor Sopoaga is grateful for the opportunity to take up a part-time role as a Health Adviser in Samoa for NZMFAT.