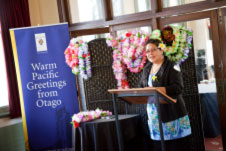 These profiles offer you the opportunity to hear the voices of some of our Pacific students, both past and present.

We believe the stories showcasing some of the Pacific students who have previously studied at the University of Otago will truly serve as inspiration to others.  Alongside these stories are the earnest accounts of some current Pacific students, students who are extremely driven, determined and deliver in showcasing academic success.   These current students offer words of wisdom to new students and they share with us some of the key things that have led to their positive academic experience thus far.

Please scroll below to see a selection of photographs of Pacific students taken during their time at the University of Otago. 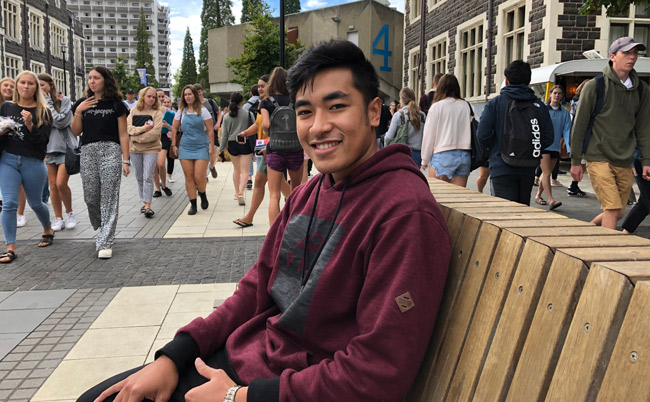 Above Image: Geodes Laufanuaosamoa Mefiposeta Maualaivao from Samoa is following in his mother's footsteps and studying surveying at Otago.

A name can say a lot, especially one as long and beautiful as surveying student’s Geodes Laufanuaosamoa Mefiposeta Maualaivao. Read more... 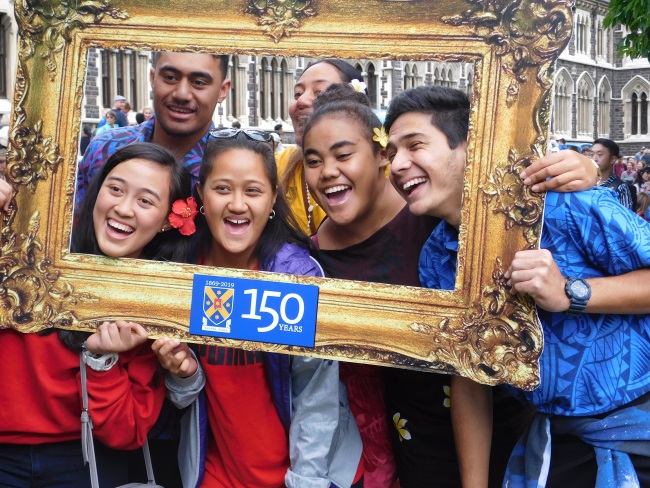 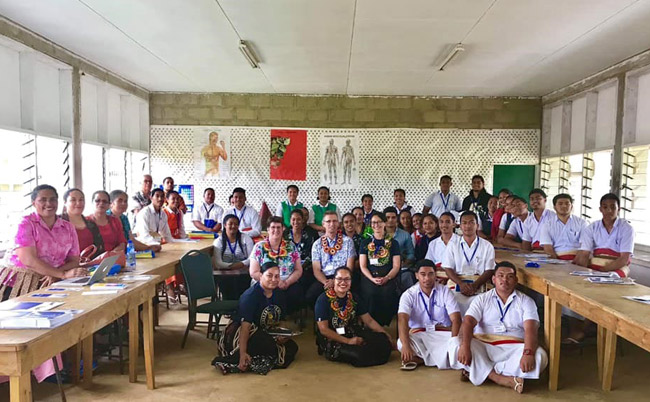 Above Image:  Mary Jane Kivalu (sitting on the floor at left) with the University of Otago delegation at Takuilau College in Lapaha, Tonga.

Raised in a Tongan speaking family in Auckland, the first time Mary Jane Kivalu visited Tonga was as a teenager with her mother. Recently she made her second trip to the Kingdom to help launch the Otago Tongan Alumni Network. Read the full story. 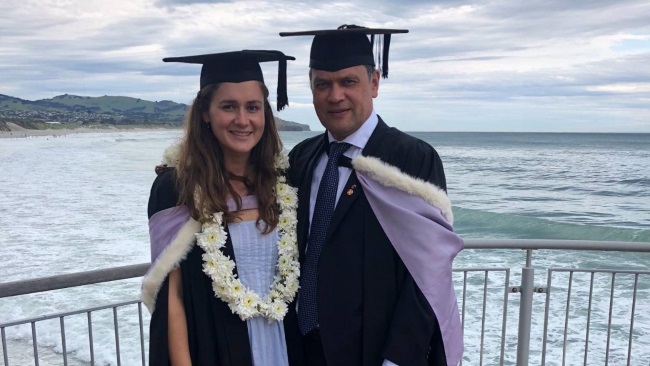 Above Image:  Brogan Maoate and Kiki Maoate, her father, at her graduation from the University of Otago School of Medicine. She is the third generation of her family to graduate as a doctor.

From the back roads of the Cook Islands to the hallways of Christchurch Hospital, the Maoate family cares for people. Read the full Maoate family story on Stuff.

Michael Ligaliga is "relieved" to have completed his University of Otago PhD, and has become the first Pacific Island student to complete an Otago doctorate in peace and conflict studies. Read more about how this PhD marks two firsts for Michael Ligaliga. 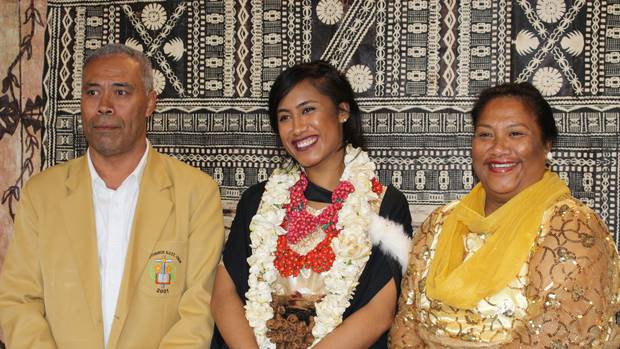 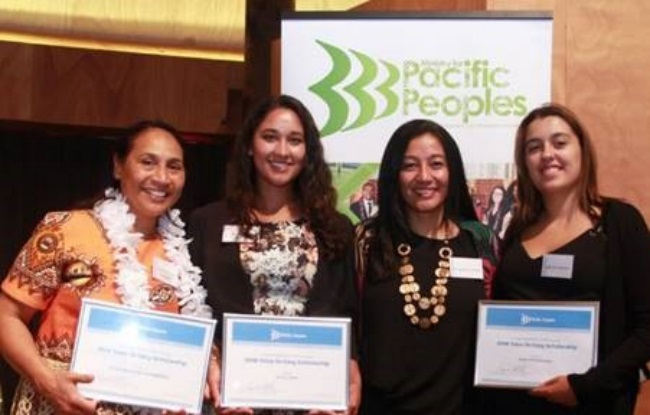 Established in 2015, the Toloa Tertiary Scholarships are funded by the Ministry for Pacific Peoples to support Pacific students to pursue studies in Science, Technology, Engineering and Maths (STEM) subjects. Read more here and meet the University of Otago Recipients here. 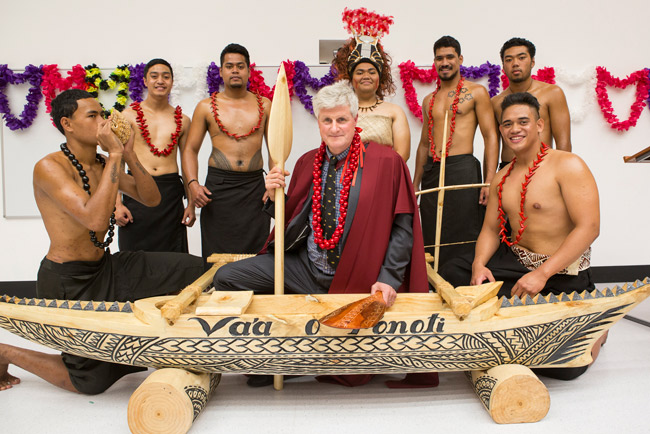 Above Image: Members of the Pacific community presented Pro-Vice-Chancellor Health Sciences, Peter Crampton, with a traditional va’a (waka) at a welcoming function for Pacific Island students into the Division of Health Sciences on Friday (Feb 2018). Photo: Sharron Bennett.

The University of Otago continues to lead the way in education for Pacific peoples with the development of Va’a o Tautai, the Pacific entity within the Division of Health Sciences. Read the full story... 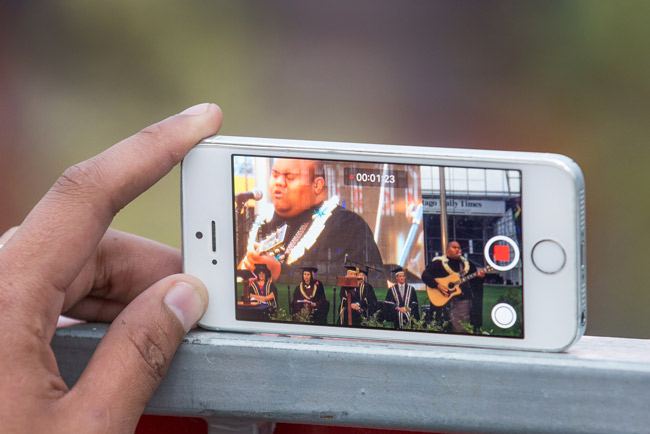 The Convocation ceremony marks the start of the University of Otago Orientation.  This year a highlight of the ceremony was the energetic and mesmerising performance of Otago music graduate Metitilani (Lani) Alo who sang two songs, and left the stage with at least 4000 new fans and a standing ovation. Read the full 2018 Convocation article... 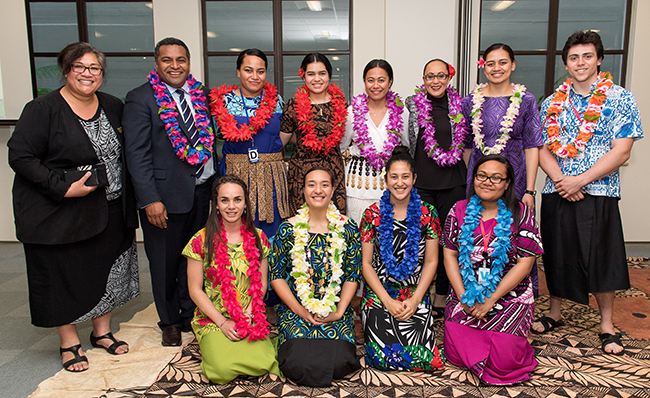 Otago students are riding a wave of success after filling half of the places offered by several government departments backing a 2017 summer internships programme. Read more... 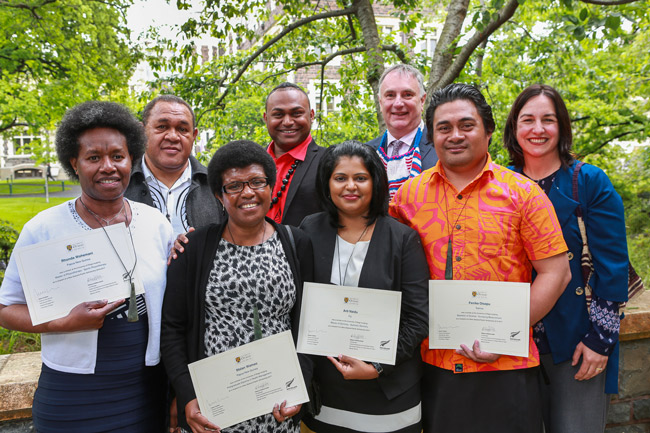 The hard work and sacrifices of international Pacific scholarship students were rewarded last Friday when the University of Otago New Zealand Development Scholarship Completion Ceremony was held to celebrate and acknowledge the journeys and achievements of undergraduate and postgraduate international students during their time at Otago Read the full story. 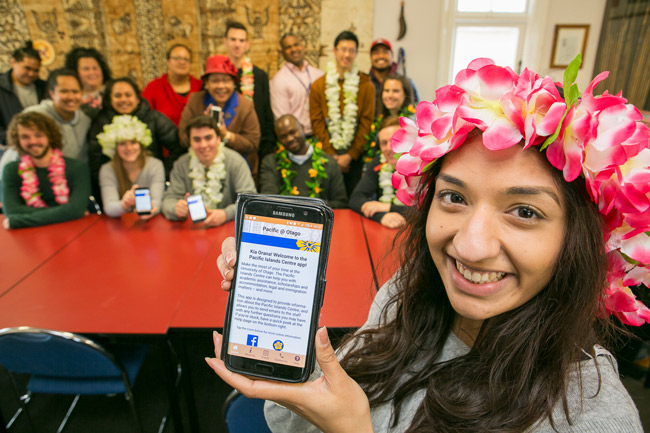 Above image: Student Anneka Gandhi shows off the app she helped create for the Pacific Islands Centre. Photo: Sharron Bennett.

An app created by Information Science students will make it easier for the University’s Pacific Islands Centre to communicate with the students it supports. Read the full story. 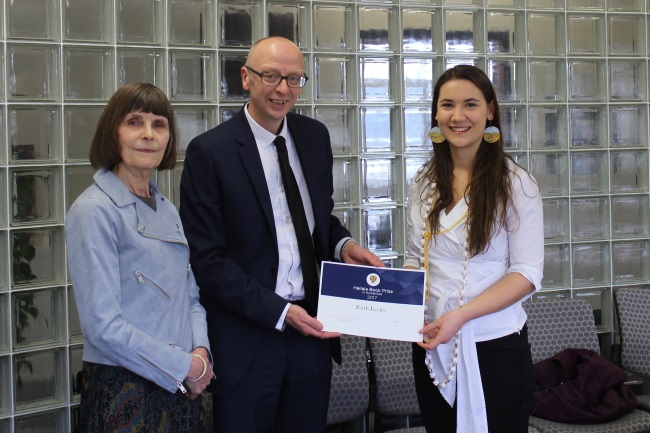 A new book prize has been established to celebrate the highest achieving Pacific female student in a 200-level paper in the Humanities. This year the 2017 prize went to the inaugural winner, Faith Eccles, at an event held in August. Faith received the prize for her outstanding result in Anthropology 210 Translating Cultures. Read more...

Above Image: The Principal of South Auckland's Aorere College Gregory Pierce and University of Otago Deputy Vice-Chancellor Professor Helen Nicholson (centre) sign a Memorandum of Understanding between the two institutions earlier this month.

Otago is actively working to support Pacific youth into tertiary education – with the signing of a Memorandum of Understanding (MoU) with one South Auckland secondary school this month underscoring these efforts.  Read the full story. 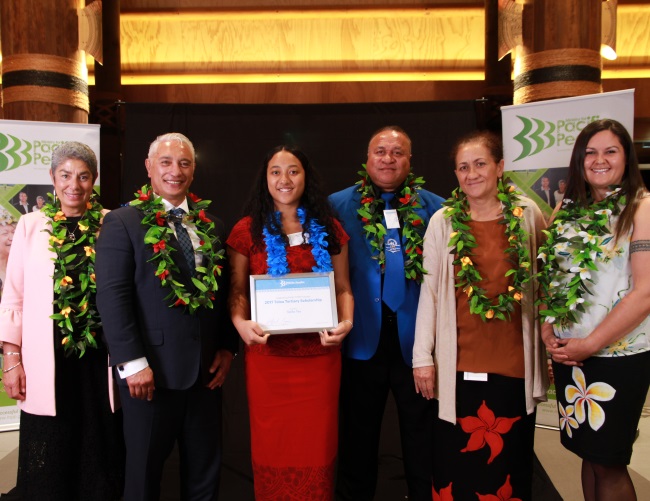 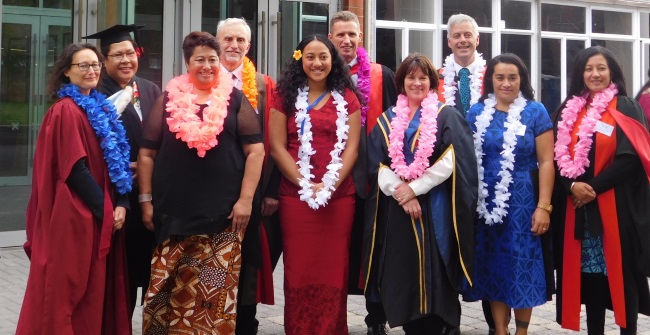 In honour of University of Otago Pacific Peoples Entrance Scholarship Awardees a celebratory event was held in March 2017, with the official address delivered by Professor Harlene Hayne, Vice-Chancellor. This year as seen in the above image success was also celebrated with regards to Ms Teu receiving a Ministry of Pacific Persons Toloa Scholarship. Read Sisilia's full story. 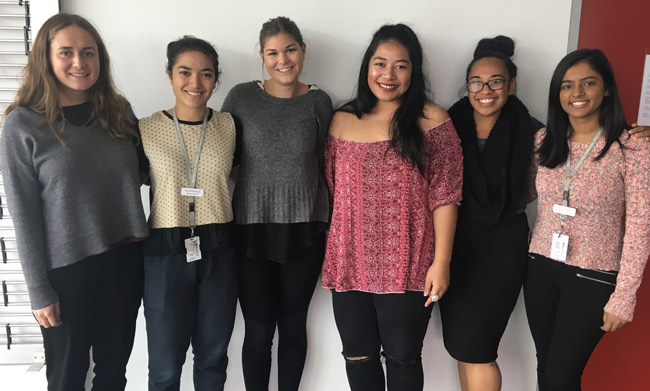 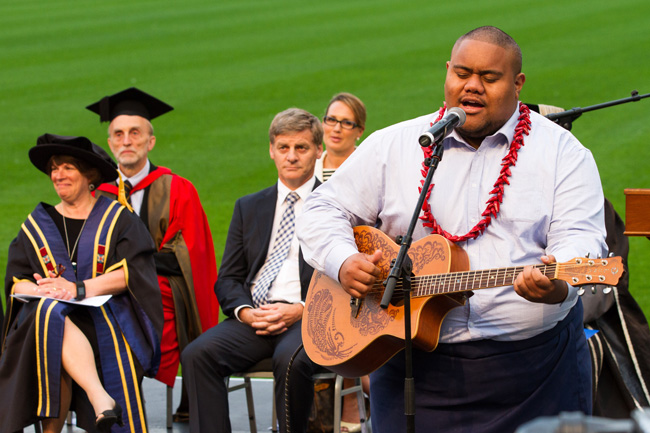 The Convocation ceremony marks the start of the University of Otago Orientation Week and this year saw 3000-first year students in attendance.  For the full article... 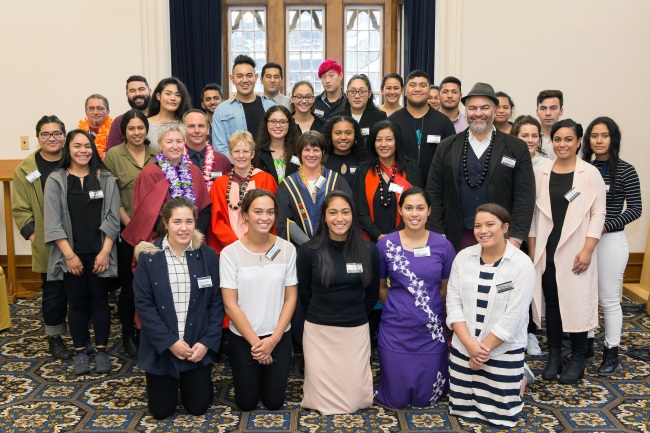 Above Image:  Staff and some of the Pacific recipients who were awarded University of Otago Māori and Pacific Peoples Entrance Scholarships (2016) 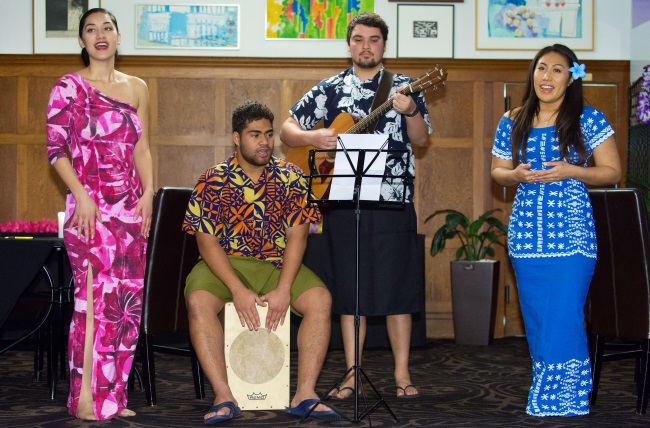 Above Image: Latafale Auva'a, C.J. Sopoaga, Callum Lynch-Hines and Eden Iati perform in song at the formal launch of the Pacific Academic Staff Caucus on 11 July 2016

"I had many transferrable skills, gained from family, my culture, working in factories, playing sport and living in South Auckland, that enabled me to relate to the content in the social work papers."
See more...

I used the Foreshore and Seabed Debate as a case study to unearth the equality and rights arguments that New Zealanders employ…
See more...

Mercy Ah Siu-Maliko says that her main purpose in coming to the University of Otago was that it “was able to offer postgraduate opportunities especially for women in areas that were mostly dominated by men”.
See more...

Filipo Levi says "it was very hard at the beginning", fitting in university studies with his rugby playing. Nonetheless, plenty of hard work, determination and support ensured success.
See more...

The study of law as well as its practice fosters a particular type of individual and personality – one Fanaafi Aiono-Le Tagaloa…
See more...

Becoming a teacher wasn’t always Nathan’s plan. He moved to Otago from Christchurch to study Phys-Ed exclusively, on the recommendation of teachers who had told him it was “the best place in the country” to study the subject.
See more...

Tautala Asaua is aiming to rewrite the early prehistory of Samoa.
See more...

“I gained a range of transferable skills during my time at university – the ability to read, analyse and interpret information in a meaningful way is really valuable in my day-to-day working life.”
See more...

Albany Lucas studying towards a DipGrad in Psychology
See more... 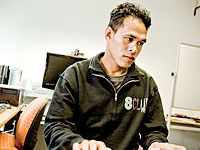 Hobert Sasa says he has "a strong sense of belonging here". The lecturers, he says, are "awesome" - and the University's Pacific Islands Centre is his "second home".
See more...