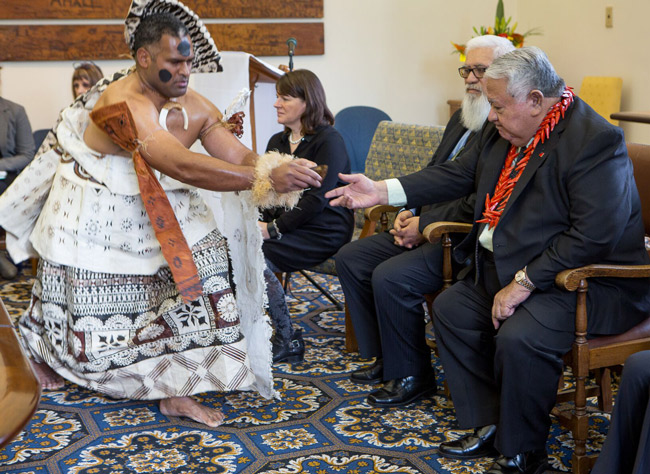 The Prime Minister of Samoa Hon Tuilaepa Sailele Malielegaoi believes it is vital that elected leaders in the Pacific respond to the needs of their people, in order to maintain national stability.

The University was honoured to host the Prime Minister last week, in a three-day visit which aimed to develop further the relationship between Otago and the Samoan government.

During his visit he gave a public lecture: Leadership & The Blue Pacific Identity underpinned by Political stability, in which he described the commitment of Pacific Island governments to work together to achieve a vision of peace, harmony, security, social inclusion, and prosperity in their region, allowing all Pacific people to lead free, healthy, and productive lives for now and into the future.

“While the world be-labours the issues of security around military might and the wonders of technological advancement in reaching such ends, our priority in the Pacific is to maintain stability of our governments and countries. We can do this through a review of our governance pathways and ensure that our elected leaders respond to people’s needs,” he said. 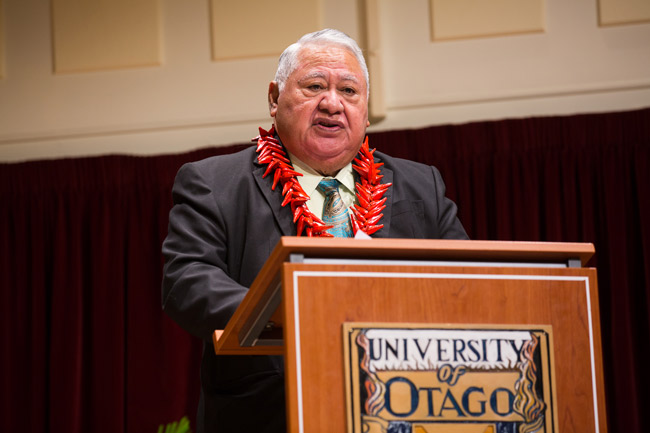 Hon Tuilaepa Sailele Malielegaoi is Samoa’s longest serving Prime Minister, holding the role since 1998. Prior to last week he had never been to Otago or Dunedin, although his eldest daughter and her husband are alumni of the University.

He was formally welcomed to the University last Wednesday morning by the Vice-Chancellor and Chancellor in a Clocktower event which included both a Mihi Whakatau conducted by Hata Temo (Kaitohutohu Māori/Māori Advisor in the Office of Māori Development), and a Pacific Kava Ceremony coordinated by the University’s Pacific Island’s Centre.

Last Wednesday also saw the New Zealand launch of his memoir Pālemia (which translates from Samoan as “Prime Minister”) which he co-wrote with Victoria University of Wellington academic Dr Peter Swain followed by his public lecture, delivered to a packed Marama Hall, and then dinner at the University Lodge. He also met with the divisions of Health Sciences and Otago School of Business.

On Thursday he was hosted by Acting Mayor of Dunedin Chris Staynes at a Civic reception, had lunch with 50 Pacific staff and student leaders of the University at Toroa College and later met with the Chief Executive of Otago Polytechnic and visited the Forsyth Barr Stadium and met with the Otago Rugby Football Club.

On Friday he met with key Pacific and External Engagement staff of the University, before departing at lunchtime. 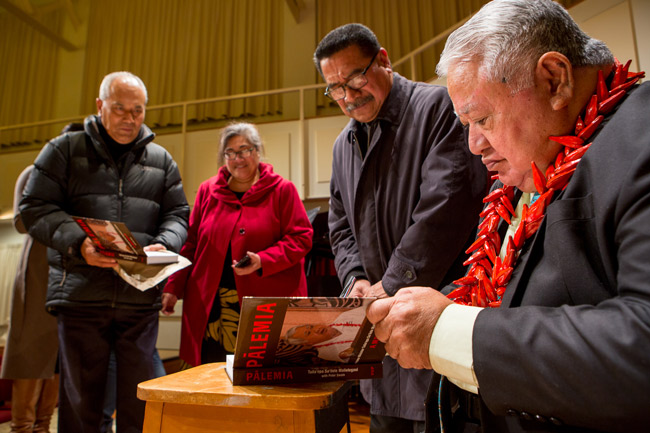 The Manager of the University’s Pacific Island’s Centre Tofilau Nina Kirifi-Alai who accompanied the Prime Minister on all of his engagements says Otago already has an established relationship with Samoa through a Memorandum of Understanding with the National University of Samoa since 2004 and has extensive working relationships with the Ministry of Health where most of the Otago students visit for their practicums.

Tofilau Nina says the visit shows Otago “walks the talk” and is actively engaging with Pacific communities to build stronger relationships, implement programmes and to lift the performance of Pacific students through its Pacific Strategic Framework.

She says he had very positive things to say to Otago and the Samoan community here in Dunedin.

“At the lunch for Pacific staff and students hosted by Professor Helen Nicholson at Toroa College, he spoke about the wonderful support provided by Otago through its residential colleges and also encouraged the students to do well in their studies and to return home to help their communities,” she says. “At the Civic reception, he advised the Samoan people – “You are now living and working here in New Zealand. Do your best, for when you do your best and serve New Zealand well, you are also serving Samoa well”. 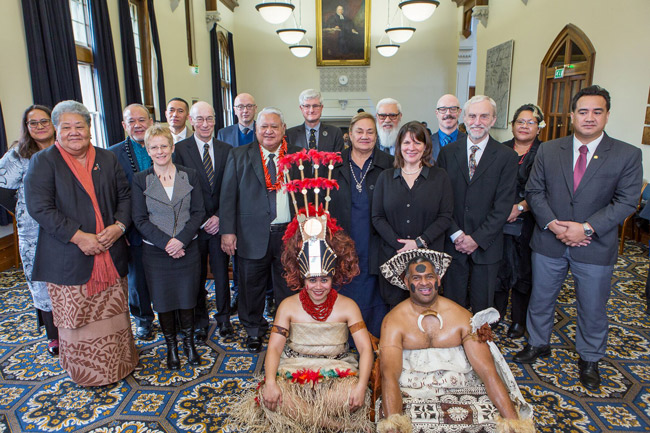 “The University sees itself as part of the wider Pacific region and is building strong links in teaching and research. The number of students coming from the Pacific and especially Samoa is increasing.”

She says the visit went extremely well, despite the chilly weather, and that Hon Tuilaepa Sailele Malielegaoi learnt much about Otago during his visit.

“He appreciated being invited here, the formal welcome and the Kava ceremony and the warmth of the welcome,” she says. “The Samoan and wider Pacific community were also delighted to see and engage with their Prime Minister and an elder statesman from the Pacific in Dunedin. It was a very special occasion for us as a community.”