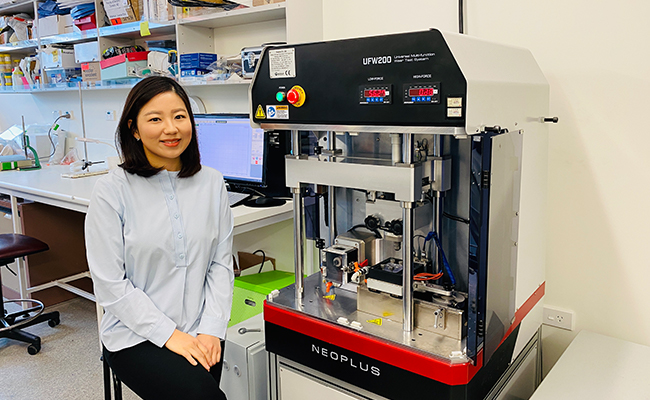 Better dental care for Kiwi kids could be just around the corner, thanks to new technology being developed at the University of Otago.

The caps are fitted over decayed teeth without any surgical intervention, making them a convenient and ideal choice for treating children with tooth decay. The lead researcher of the project and University of Otago Bachelor of Dental Technology lecturer, Dr Joanne Choi, explains the issues with the existing metal capping.

Firstly, the size of the metal caps doesn’t suit some Kiwi kids. The caps are pre-formed and while they come in different sizes, Māori and Pacific children’s teeth are often bigger than the pre-formed models, she says.

Secondly, the appearance of the metal caps can also be an issue, as they are far more noticeable. Children and parents notice such things, she says, in particular highlighting that the children with metal crowns have decay. This would potentially signal that the “different look” of these kids reflect that the parents have not cared for their children.

This compounds a further issue – what Dr Choi calls ‘dental anxiety’. Many children are already anxious of dental treatment, and the fear of dental drills and injection can discourage them from wanting dental treatment.

“Oral health is a big problem in New Zealand and internationally, and dental anxiety is a real thing. So, if we can come up with a treatment that can help reduce that, that’s going to be good for a lot of people."

“Oral health is a big problem in New Zealand and internationally, and dental anxiety is a real thing. So, if we can come up with a treatment that can help reduce that, that’s going to be good for a lot of people,” Dr Choi says.

Although tooth-coloured crowns already exist for adults, they are in many cases unsuitable or unavailable for publicly-funded care for children, she says.

“The novel crowns we’re developing, will actually be more cost effective for the District Health Boards, compared to the investment currently made on the metal caps. This is important because it will lead to the treatment of many more patients. Besides, for the kids and parents, the aesthetic factor, having tooth-coloured caps, is really important.”

Dr Choi says her research began almost by chance in 2017, when she was inspired at a seminar by then-University of Otago Associate Professor Lyndie Foster Page.

“I was listening to one of her research seminars and she mentioned how parents had said the metal crowns don’t look nice. If the kids have one or two metal crowns, it’s not such a problem, but if they have three or four it becomes noticeable.

“Whānau had said that metal caps may highlight that their tamariki have “bad teeth”, which Dr Foster Page said may emphasize oral health inequalities since the metal crowns lead to stigmatising poor oral health care.

“So I thought that maybe I could come up with a new material that works like the metal crowns and is affordable, but looks like the tooth coloured crowns. Altogether much more aesthetic.”

While technical and commercial pathway details are still in development, Dr Choi expects that the data already gathered will mean the next phase of the project is accelerated. Thus, the new caps could be on the shelf and in Kiwi kids’ mouths in a few years.

The next step is ensuring the new caps are better suited to Kiwi kids’ teeth, in particular Māori and Pacific children aged between four and seven. To gather data Dr Choi is working with Bachelor of Oral Health staff (Dr Susan Moffat and Mr Sam Carrington) at the University of Otago’s Dunedin dental school. Parents will have the option of allowing Dr Choi to scan their children’s teeth using a digital oral scanner. The scans will take an extra 5-10 minutes.

This work has been largely enabled by a follow-up grant recently announced by Cure Kids, which runs until July 2021. Cure Kids initially funded this project via an Innovation Seed Fund grant in 2018.

By the end of next year Dr Choi says a prototype will be ready for clinical trials, which will likely run for one to two years. It is expected the final product will then be commercialised, first in New Zealand, then internationally.

Dr Choi says the journey from having her interest piqued in a seminar to now being within reach of the product being commercially available for Kiwi kids has been a long one.

“When I started I never thought it would take this long. The development stage does take time but I’ve learned so much through this process.

“I’m going to make it work, 100 per cent. There were times when I almost wanted to give up but so many people have helped me through the process. I believe that we can develop the new dental crown system to help kids, families and social wellbeing. This is a collaborative process and I feel really lucky to have had so much support. So, I’ll make it work.”