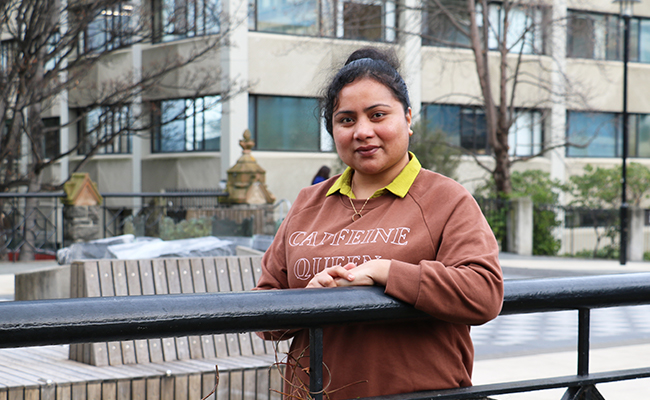 Marou Tikataake graduates with a Postgraduate Diploma in Public Health on 21 August.

Marou Tikataake came to New Zealand to arm herself with more knowledge to fight communicable disease back home in Kiribati, but what she didn’t know was that COVID-19 would separate her from her young daughter for two years.

Marou, a Ministry of Foreign Affairs and Trade New Zealand Scholarship recipient, graduates in absentia with a Postgraduate Diploma in Public Health on 21 August from Otago.

Growing up on the capital island of Tarawa in a family with nine siblings meant Marou always had someone to play with and to argue with, but she also saw the struggle her parents went through to raise them.

"My mum was a nurse and my dad worked in a supermarket company. He retired and died early in his 40s. I was 16 years old when he died. We experienced hardship. The way we live in our country families help each other. We received support from our aunts, uncles and grandparents on both sides.

“Our parents worked really hard, especially my mum. After my dad died she didn’t remarry and she worked all her life until now – she's 66 now. By the time my older siblings got jobs they helped the younger ones. The same with me, when I finished university, I got a job at the hospital and helped the younger siblings."

Even though the family experienced their fair share of hardship, they made it through with the support of their extended family.

Marou finished seven years in primary school before being selected for a free government boarding school.

She then received a scholarship for university.

Growing up sleeping at the hospital during her mum’s night shifts inspired Marou to follow in her mother’s footsteps to a career in health.

Marou dreamt of becoming a doctor. However, the limited resources meant entry to the medical programme was extremely competitive.

She instead began studying biochemistry but found she wasn’t really interested in it and after a semester she switched to nursing school, where she spent the next year.

However, her dreams of studying medicine persisted and she decided to apply for a scholarship to study at Universidad de Ciencias Médicas de Granma in Cuba.

“For me, I was really lucky because my mum was really supportive. She’s really strong. Even some of my family were questioning her asking why they supported me to go there saying ‘she will be far away’ or ‘aren’t you worried about her safety?’. My mother she believes in me – she said, ‘my daughter is not a naughty one, she’s responsible and mature enough to look after herself’.”

In 2007, Marou headed off to Cuba. Life was like she was back in boarding school. Everything was provided on campus.

She spent six years and 10 months on the island, with the first nine months studying Spanish and pre-medicine. During her second year of medicine, she received news that her aunt (more like her second mother) who raised her had passed away.

Marou went straight into an internship programme for two years when she returned to Kiribati.

Inspired by her mum’s continued efforts as a tuberculosis (TB) nurse and the high rate of preventable disease in the country, she selected Public Health, with a special focus on communicable diseases, as the focus of her career.

“I saw that leprosy and TB have a high rate of incidence at home and some of my family contracted TB.”

When Marou returns to Kiribati she will be back in her old communicable disease department at the Ministry of Health and Medical Services.

Marou says coming to Otago has opened her eyes to factors which need to be considered when dealing with communicable diseases.

“I noticed that a lot of my patients are the ones who are already immunocompromised, those with underlying conditions like diabetes.”

The lifestyle and environmental factors of Kiribati play a major role in communicable disease spread, she says.

“In the olden days, our elders went out fishing and even plant vegetables and fruits for everyday meal.”

However, now there is huge reliability on imported foods, with a high consumption or processed food and a sedentary lifestyle, she says.

Climate change also affects the quality of the water and soil making it difficult to plant crops. For example, well water is getting saltier due the increase of temperature, she says.

NZ Scholarship students are usually permitted to return home to their countries during the University’s summer break. However, when COVID-19 hit, Marou had no choice but to stay in New Zealand.

She left her daughter when she was 2 years old, and now Marou’s missed two of her daughter's birthdays.

However, the family support back home means she knows her daughter has been loved and cared for in her absence.

“COVID-19 is a natural disaster; we can’t control it. We just have to wait patiently.”